There’s a lesson in here for anyone planning to visit a cemetery to find where their ancestors are buried.  I wish I’d had this lesson before traveling to Germany.

May 10 was our last day in the Kassel region, and we were going to see the village of Jesberg, home of the Katz and Katzenstein families.  As the Katzenstein/Katz family has been the one I have been researching most recently, these names and stories were freshest in my mind, and I was very interested in seeing what we could find and learn. Hans-Peter Klein was again going to be our guide along with Mrs. Ochs, who lives in Jesberg. We followed Hans-Peter from Kassel to Borken, where he picked up the key to the cemetery in Haarhausen where the Katzenstein and Katz family members from Jesberg were buried before the Jesberg cemetery itself was established.

As with the Obervonschutzen cemetery near Gudensberg the night before, I had no idea what to expect in Haarhausen.  I did like the horses who were grazing nearby. 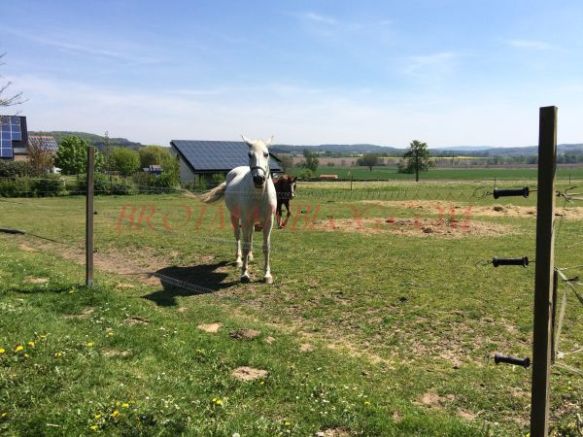 This was another very big cemetery with close to 400 stones dating back to 1705. Once again, Hans-Peter came equipped with a map and pages from the LAGIS website showing the headstones and information about many members of the Katz and Katzenstein families who were buried at this cemetery.  So we were off on another treasure hunt—but with better lighting and more rested eyes than the evening before.

And what treasure we found.  I have to admit that I should have been better prepared for this visit.  I should have searched the LAGIS website myself before leaving home and written down all the Katzensteins who were buried there, where they were buried, and how they were related to me.  But I failed to do that.  I am not sure I even knew about that part of the LAGIS website, or I’d forgotten about it.  It would have made my search both easier and more meaningful if I’d been better prepared.

For example, these two headstones:

I thought that these were the headstones of my three-times great-grandparents Scholum Katzenstein and Breine Blumenfeld because, looking quickly, they matched the pages for a Schalum and a Brendelchen.  I placed stones and even took a picture with both stones, believing these were the parents of my great-great-grandfather Gerson Katzenstein.

But I was wrong.

In fact, having now had the chance to sit and check my tree and the LAGIS pages and the photos, I know that these were the stones of my FIVE-times great-grandparents, Schalum, son of Pinchas ha-Cohen, and his wife Brendelchen (father’s name unknown) who died in 1774 and 1776, respectively.  They were the grandparents of Scholum Katzenstein, great-grandparents of Gerson. Wow. Do I wish I had known? Yes. Does it really matter? Probably not.  I paid tribute, I visited. I just thought they were different people.

I am, however, really sorry I could not find the stone for Meir, the son of Schalum ha Cohen and Brendelchen, who is buried at Haarhausen.  He was my four-times great-grandfather, the father of Scholum Katzenstein.  There were many stones that were similar to this one depicted on the LAGIS website.  But I could not find Meir’s stone. 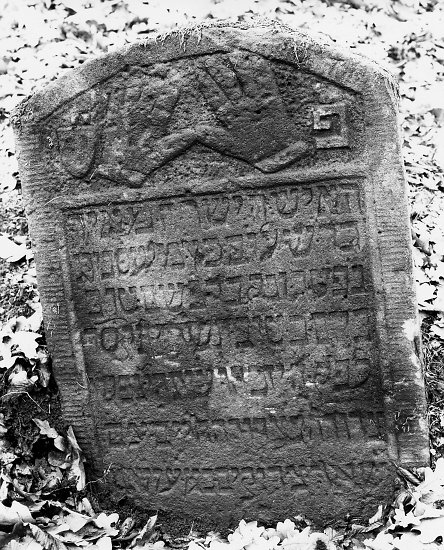 I did, however, find the stone for his wife, Henchen, who was my four-times great-grandmother.  But I did not realize this was who she was at the time, only when I got home and checked my resources.

And this stone, which I photographed but could not read clearly at the site, is in fact the stone for my three-times great-grandfather, Scholum Katzenstein.  It is labeled on the LAGIS website as the stone for Abraham Schalum, son of Meir ha-Kohen, so I didn’t realize it at the time, but again, after checking with my resources at home, I now know that that was the Hebrew name used by Scholum Katzenstein and that that was in fact his stone. Perhaps the stone for his wife was nearby, but  Hans-Peter had no sheet for a Breine Blumenfeld Katzenstein, and I couldn’t find one either at the LAGIS site.

I did find the stone for Schalum Abraham Katzenstein, son of Jacob Katzenstein, grandson of Scholum Katzenstein.  He was my first-cousin, three times removed.  His brother Meier is also buried at Haarhausen, but we did not find his stone. (You can see why I was overwhelmed with all the similar names!) 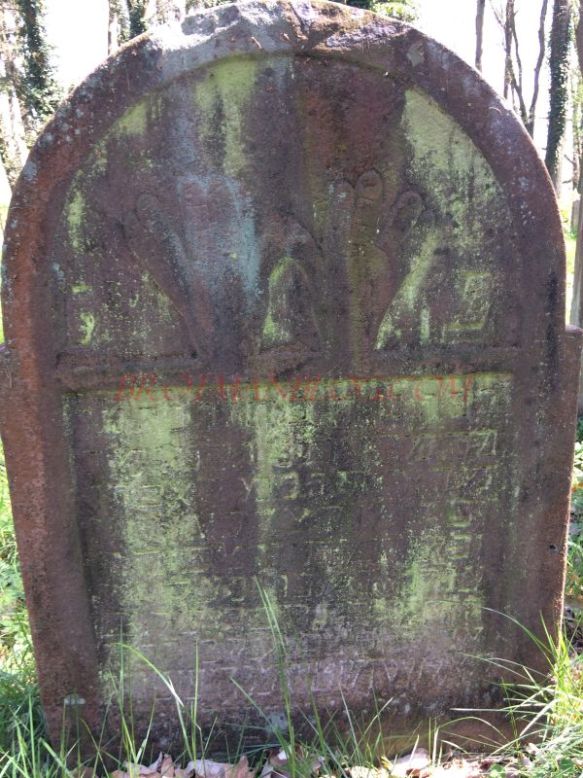 So I learned an important lesson: be really well prepared for cemetery visits.  I feel extremely fortunate that I found the stones of my 5x great-grandparents, my 4x-great-grandmother, and my three-times great-grandfather. But I sure wish I’d known more about who was buried at Haarhausen and where they were buried before I even got to the cemetery.  Am I kicking myself? Yes. I missed some important stones because I had not done a careful enough job of preparation. It’s too late now, and I am annoyed with myself, but I also learned a very important lesson.  Do the hard work of preparation ahead of time because cemeteries are overwhelming, stones are hard to read, and time is limited.

We left the cemetery and proceeded on to Jesberg, where the Katz and Katzenstein families lived from at least the early 19th century. Today there are about 2500 people living in Jesberg, making it about four times the size of Sielen but smaller than Breuna. A castle was built in Jesberg in the 13th century, and there was a Jewish community dating from the 17th century. In 1905, the Jewish community of about 90 people made up over ten percent of the overall population of Jesberg; during the 19th century when my great-great-grandfather was born and raised, the Jewish population ranged from 55 people to 73 people, according to Alemannia-Judaica.  A synagogue was built in 1832, and there was a mikveh, a Jewish school, and eventually a cemetery.

Jesberg synagogue before World War I

Helping us in touring Jesberg along with Hans-Peter was Mrs. Ochs, who is another volunteer in the research of the Jewish history of the area and who works with Barbara Greve, who was out of town. Mrs. Ochs lives in Jesberg and was, like all the others, very warm, friendly, and helpful. We first drove out to the Jesberg cemetery, which did not open until about 1900 and which only has about twenty stones. 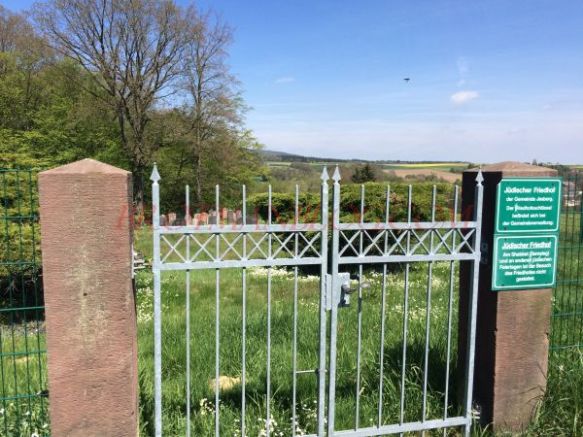 View of Jesberg from the cemetery

These are all the stones at the Jesberg cemetery

I knew that Meir Katz and his wife Sprinzchen Jungenheim were buried there, the parents of Jake, Aron, Ike, Regina, and Karl Katz, all of whom came to the US and settled in Oklahoma, some in the 19th century, others in the 1930s to escape the Nazis. I had spoken to Karl Katz’s son Fred before we left for Germany, and he had asked me to look for his grandparents’ graves and told me how to find them in the cemetery. 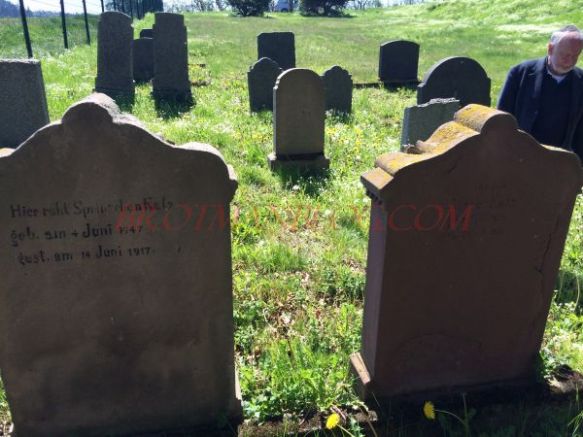 Back of the stones for Sprinzchen and Meier Katz in German 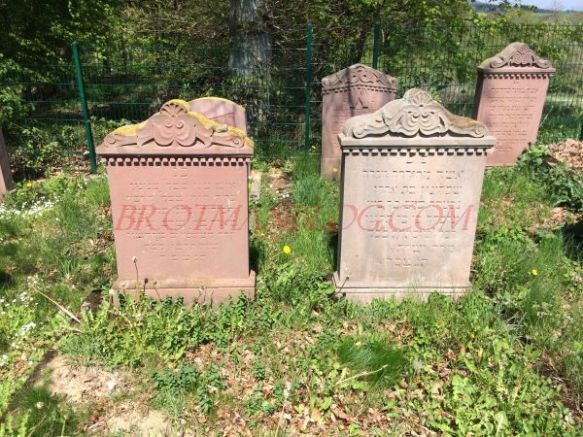 Front of stones for Sprinzchen and Meier Katz in Hebrew

There were also a few stones where half of the stone was left blank, obviously reserved for a spouse.  What had happened to their spouses? Had they left Germany and escaped safely or had they been killed in the Holocaust? I decided I would check.

Markus Katz: He was the son of Moses Katz, as I wrote about here.  His grandmother Rahel Katzenstein was the sister of my great-great-grandfather Gerson Katzenstein. 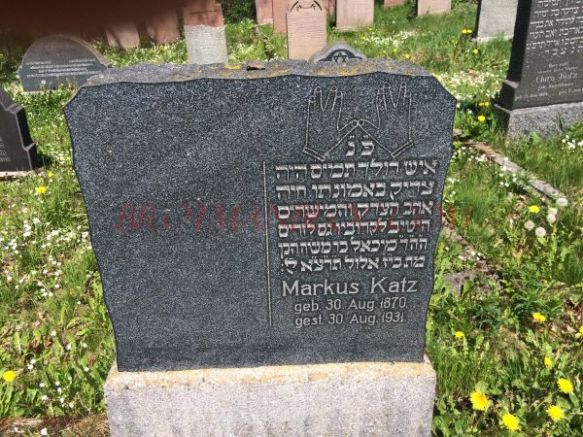 Markus was married to Minna Wallach, also known as Nanny according to other records.  As I had feared, she was murdered in the Holocaust, explaining the blank side of this headstone.

Another stone with a blank half was for Josef Katz.  He was quite distantly related to me, a third cousin, three times removed.  According to David Baron’s research, Josef was married to Bertha Lowenstein, daughter of Simon Lowenstein and Esther Stern, and she was born in Fronhausen, Germany in 1870.  I have not yet found any information about Bertha’s death so cannot say why the other half of Josef’s gravestone is blank. Perhaps she escaped the Holocaust, though her son Siegfried did not survive, so I doubt she did either. I will keep looking.

The third stone with a blank half was for someone named Moses Schloss.  As far as I know, he was not a relative of mine, but I still wanted to know what had happened to his wife.  According to Yad Vashem, his wife was Lisette Gans Schloss, and she died at Theriesenstadt on October 14, 1942. So it appears my hunch was right.  At least two of the three blank stones were for victims of the Holocaust.

After visiting the cemetery, we returned to Jesberg, where Mrs. Ochs showed us the former synagogue and pointed out the brook that ran behind it, feeding what was probably once a mikveh.

Brook running behind the synagogue

Back of former synagogue

I could imagine the carefree life that my great-great-grandfather Gerson Katzenstein and his many cousins had in Jesberg, running through the quiet streets and playing in the brook.  The town is probably not that much different today in appearances, other than the cars and paved roads.

We also walked down Bahnhofstrasse, the street where Fred Katz had lived as a young boy before escaping with his parents to Oklahoma in December 1938.  Fred had told me the house number, so I was able to find the house where he had lived with his parents, Karl Katz and Jettchen Oppenheimer, his brothers Walter and Max, his uncle Aron and his wife Sarah, and their sons Jack and Julius.  More on Fred and his life in Jesberg in a later post.

Marktplatz and church in Jesberg

House where the Katz family lived in Jesberg in the 1930s

The brook that runs through Jesberg

We then all went to lunch in a nearby town (there was no place to eat—not even a bakery—in Jesberg), and then Harvey and I said another difficult goodbye to Hans-Peter and Mrs. Ochs and to the Kassel region.

Our days in the Kassel region far exceeded my expectations.  The friends we made and the places we saw will stay with me forever.  Yes, I wish I had better prepared for the cemetery visits, but overall I have no regrets and am so thankful that I got to visit the homes of my Hamberg, Goldschmidt, Schoenthal, and Katzenstein ancestors.  I am particularly thankful to Ernst Klein, Julia Drinnenberg, Hans-Peter Klein, Barbara Greve, and Mrs. Ochs for all their hard work and dedication, and, of course, especially to Harvey for being a willing and helpful participant in the hunt for stones in so many cemeteries.

Now we were heading south to Wurzburg and then to Schopfloch, the home of the Nussbaums

41 thoughts on “Before You Visit A Cemetery, Read This Post”