One of the most intriguing stories I’ve researched is the story of my cousin Maurice Jay Baer (known as “MJ”) and his mysterious marriage to Bossie O’Brien Hundley, a well-known activist for women’s suffrage in Alabama. I wrote in detail about Bossie and what I knew of her relationship with MJ Baer in a post entitled “The Jeweler and the Suffragette: Star-crossed Lovers?” in July 2016.   I first learned of their relationship when I discovered the marriage license for MJ and Bossie dated June 19, 1945; they were married in Tryon, North Carolina. Sadly, MJ died less than a year later on April 25, 1946.

I was puzzled that MJ’s family hadn’t known that he was married. Bossie was not named as one of his survivors in his obituary, and MJ was buried with his family in Philadelphia, not where Bossie was later buried in North Carolina. When I’d asked my Baer family relatives about the marriage, no one knew anything about it. In fact, the family believed that he had never married at all.  He was described as the “bachelor uncle.”

It seemed that Bossie’s family, however, did know about the marriage.  MJ was named as Bossie’s husband on her death certificate, and her obituary mentioned him as her second husband. 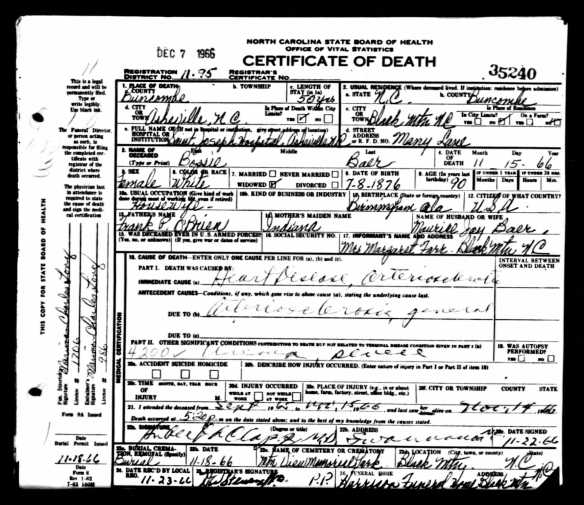 I was left with so many questions. How had a Jewish man from Massachusetts met a Catholic woman from Alabama? Where did they live after their marriage? How and why did they keep the marriage a secret at least from MJ’s family? I tried to find out more, but had no luck.

Then on May 18, 2017, I received a comment on the blog from Mitchell Brown, who shared that she was Bossie’s great-granddaughter and that she had “known about MJ Baer and his connection to our family all [her] life. The family narrative is that it was the religious differences that kept them from being public about their marriage.”

I was thrilled to hear from Mitchell, and since then, Mitchell and her family have generously shared with me some photographs and some additional insights that have answered many if not all my questions about MJ and Bossie.

Two of Bossie’s granddaughters were the primary sources of that information. Elisabeth Hundley Farr Smith remembers MJ very well as she was born in 1934 and spent many summers with her grandmother Bossie in Black Mountain, North Carolina.  Melinda Farr Brown, Elisabeth’s younger sister, was born in 1942 and does not have any memories of MJ, but knew her grandmother Bossie very well.

Elisabeth wrote that “MJ was as close to a grandfather to me as one can get (and actually became my step grandfather when he and Bossie married).” From the age of six until she was in her twenties, she spent her summers in Black Mountain. Her parents would put her on the train in Philadelphia, and Bossie would meet her at the station in Black Mountain.  MJ also spent the summers there for many years, starting even before he married Bossie; however, Elisabeth recalls that he returned north each fall. Elisabeth wrote that MJ had his own room and bath in Bossie’s house. She recalls taking walks with him and their cocker spaniel Buffy every morning, listening to the radio in the evenings with her grandmother and MJ, driving to town to get a drugstore soda, and engaging in various activities on her own, like writing a newspaper to sell for ten cents. She was just a young child and so was not engaged in much of the adult conversation so had no insights into their relationship or how and when they’d met.

One other interesting note: Elisabeth mentioned that she knew MJ’s nephew Jerry and his wife Elsie. I believe this must be a reference to MJ’s sister Elsie Baer and her husband Jerome Grant. Elisabeth recalled that they lived in New York City and that she even visited them a few times with her grandmother even after MJ died.

Melinda also recalled meeting Elsie and Jerome. She described a lunch she had at their home in New York City in 1963 where Elsie spoke about the fact that no one had known about the marriage between MJ and Bossie. And when I reviewed MJ’s death certificate, I saw that Jerome had been the informant on that record; strangely enough he reported that MJ was single when he died.  Either Jerome had not known there had been a marriage or he was still covering up the secret marriage from the rest of the Baer family. Melinda said that she didn’t think anyone but Bossie’s daughter Margaret knew about the marriage until after MJ died. 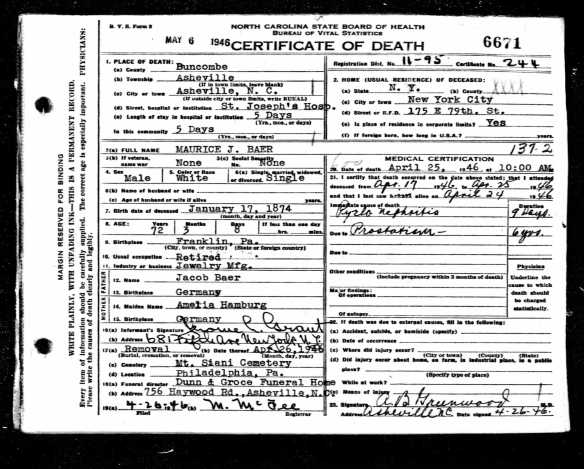 It seems that at some point after MJ’s death, the Baer family did learn of his marriage to Bossie. My cousin Mike, who is in fact MJ’s namesake, found a list of family members that was prepared when Mike’s grandfather Samuel Stone, Sr. died in 1957. Samuel Stone was married to Tilda Baer, MJ’s sister. Included on that list of family members was the name “Mrs. Maurice J. Baer, Black Mountain, NC.”

Although I have not obtained a copy of MJ’s will, I had wondered whether he had left any money to Bossie; I still do not know for sure, but Melinda told me that he had left her $1000, so I assume that MJ had also left some of his estate to his wife Bossie and probably to her daughter Margaret and both granddaughters.

As for why the marriage was kept a secret, Melinda recalls that her grandmother said that it was, at least on Bossie’s part, not because of the religious differences but rather because she did not want to be teased about their “personal life.” After all, MJ was 71 and Bossie 69 when they married in 1945.  I suppose some people might have thought it odd for two older people to marry at that point in their lives.

One of the more surprising things I learned from Bossie’s two granddaughters was how long Bossie and MJ had known each other even before they were married. Although neither Elisabeth nor Melinda knew exactly how or when Bossie and MJ met, Melinda shared with me the following page from Bossie’s unpublished book, “With the Passing Years:”

A Tribute to MJ J. Baer

One of the most ennobling influences

of my life was my friendship for twenty

years with MJ J. Baer.  This

beautiful friendship was focused on

His integrity, appreciation of the best

in art and literature, his personal

kindness were forces that built an

Just eight months after our marriage he

died leaving me a beautiful memory.

Thus, Bossie had known MJ for twenty years when he died in 1946, meaning she must have met him in about 1926.  On August 14, 1926, MJ returned to New York from a trans-Atlantic trip on the S.S. Verdam. Bossie had also taken a trans-Atlantic trip that year, returning to New York on May 28, 1926, on the S.S. Rotterdam. I don’t know how long either one of them spent in Europe, but at some point their paths crossed, as seen in this photograph that Bossie’s family kindly shared with me:

As you can see, it is dated 1926, and three people are identified in the photograph: Bossie, Mrs. Hageman, and M.J Baer.  It looks as if they were exploring some ruins, perhaps in Greece.

Melinda reviewed a travel diary that her grandmother kept during a trip taken with MJ in 1930 during which they visited Amsterdam’s Jewish Quarter. About that visit, Bossie wrote, “With Cook’s guide we visited the diamond factory of Amsterdam (not interesting), then the old Jewish Quarter and the old Synagogue dating back to the 16th century.  It was here that M.J. told the woman my father was a Christian but my mother was a Jewess!!”

I assume that Bossie was quoting MJ—that is, that he said his father was a Christian, but his mother was Jewish, not that Bossie’s were. In either case, it’s not accurate, as MJ’s father Jacob Baer was most definitely Jewish, as was his mother, Malchen (Amalie/Amelia) Hamberg. Both are buried in a Jewish cemetery, as was MJ. At any rate it is clear that all those trips taken by MJ and Bossie over the years were trips taken together and that travel was a passion they both shared. As noted in my earlier post, both traveled many times to Europe in the 1920s and 1930s, although on different ships, except for one trip in 1930 when they were listed together on the ship manifest:

It is also interesting that traveling with MJ was his niece, Stephanie Stone of Attleboro, Massachusetts, my cousin’s Mike’s mother. Stephanie obviously knew Bossie, yet Mike had always believed that his great-uncle had never married.

The family generously shared with me the following photographs of Bossie and MJ taken during their many travels together: 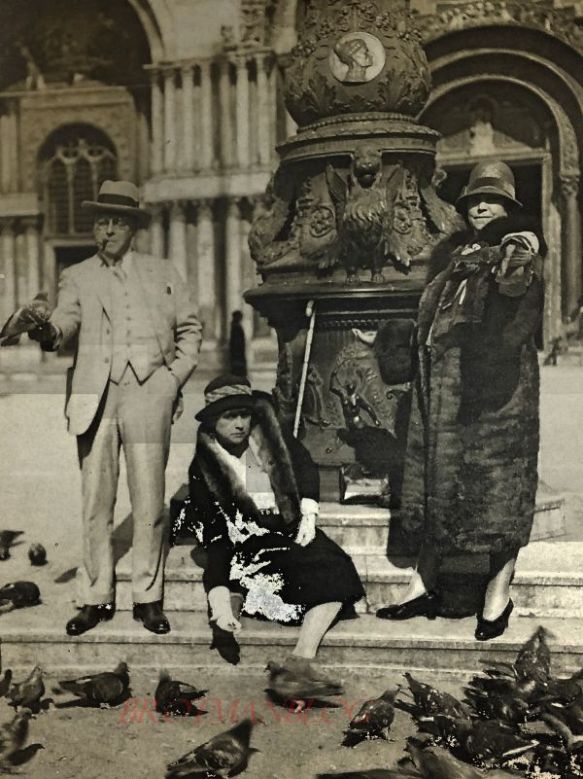 Over a year and a half ago when I wrote that earlier post about the jeweler and the suffragette, I had little expectation that I would be able to learn more about this mysterious couple.  Thanks to the generosity of Bossie’s family and the magic of the internet, I now have a much fuller picture. MJ and Bossie had a long and close friendship for many years, culminating in their marriage in June 1945. Their marriage may have been cut short by MJ’s untimely death in 1946, but their relationship had obviously been an important and valued part of both of their lives for twenty years.

34 thoughts on “Update on the Jeweler and the Suffragette: Some Answers, Some Photos”