As I mentioned in my last post, my three-times great-grandparents Seligmann Goldschmidt and Hincka Alexander had seven children.

Their oldest child was Sarah, born December 1, 1818, in Oberlistingen. Sarah married Abraham Mansbach on October 31, 1843. Abraham Mansbach was a name I’d encountered before when researching my Katzenstein relatives, so I knew I had to dig deeper to see if there was a connection.

Back in November, 2016, I wrote a post entitled “Will the Real Abraham Mansbach Please Stand Up?,” in which I described my attempts to distinguish five different men (all related to each other) named Abraham Mansbach.  The first Abraham Mansbach (Abraham I) died around 1808; the other four included one of his grandsons and three of his great-grandsons.

Abraham I had three sons: Isaac, Leiser, and Marum I.  Leiser in turn had two sons, Abraham II and Marum II, both of whom married into my family. Abraham II married my three-times great-aunt Sarah Goldschmidt, as seen above. 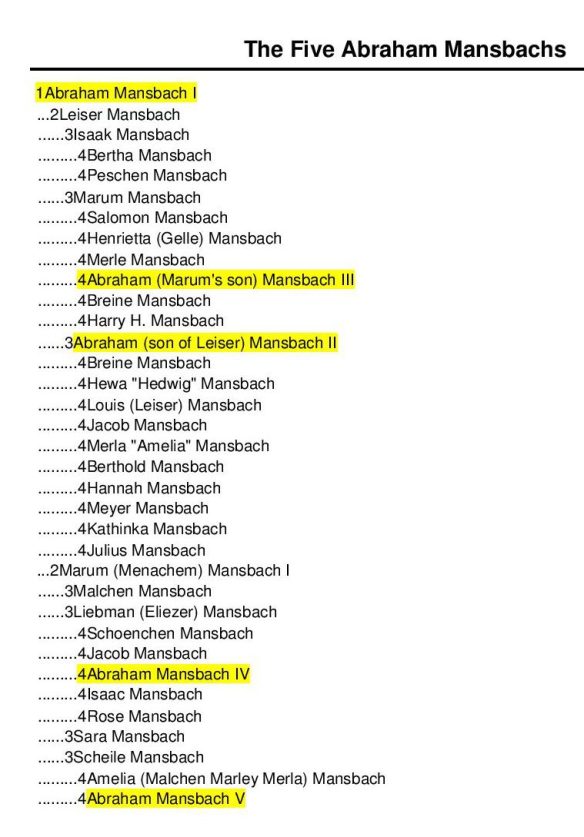 Here is one of Sarah with her two youngest sons, Meyer and Juilus. From the ages of the boys, I would estimate that this was taken in the mid-1870s: 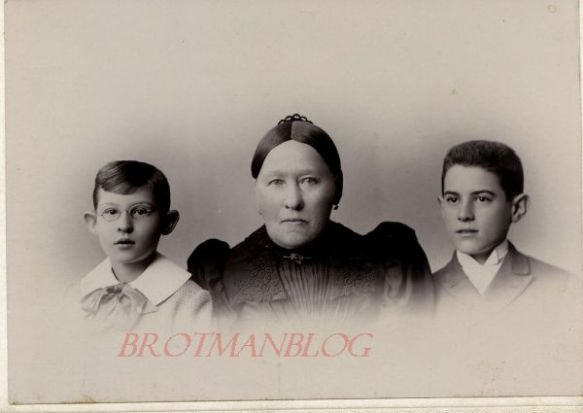 This was the Mansbach home in Maden, Germany:

Two other children of Sarah and Abraham II predeceased one or both of their parents, but did live to adulthood: Hedwig and Kathinka.  Kathinka died in the US, so her story will come in a later post. But Hedwig died in Germany.

On February 16, 1875, she married David Rothschild of Zierenberg, Germany.

Sadly, Hedwig died nine months to the day later on November 16, 1875. Had she died in childbirth? I don’t know. She was only 28 years old when she died. If there was a child, I have not found any record of him or her, and I checked all the births and deaths in Zierenberg in 1875.

Not long after Hedwig’s death, many of her siblings began to leave Germany for the United States. In fact, all but one of the remaining siblings and their parents Sarah and Abraham themselves eventually emigrated. I will continue their stories in subsequent posts.

The only surviving child of Sarah and Abraham who did not emigrate was their first-born child, Breine.

She married Jacob Bensew on February 3, 1870; Jacob was born on January 15, 1840, in Malsfeld, Germany, the son of Heinemann Bensew and Roschen Goldberg.

Because so much of the rest of the story of the the family of Sarah Goldschmidt and Abraham Mansbach II took place in the US, I will stop here and address the history of the Goldschmidt family’s migration to the US in my next post.

But first one final photograph, this one of Abraham with the four sons who grew to adulthood: Leiser/Louis, Berthold, Meyer, and Julius. I do not know which is which, but all four appear in this photograph with their father. They were all my first cousins, four times removed:

ABraham Mansbach with his four surviving sons: Meyer, Berthold, Louis, and Julius. (Not necessarily in that order.)

[1] Thus, Abraham II was the uncle of Abraham III, my first cousin-three times removed on my Katzenstein line, and he was the husband of my three-times great-aunt Sarah Goldschmidt.

26 thoughts on “Yet Another Abraham Mansbach: More Twists in the Tree”