By 1920, only two of the children of Jacob and Fannie Goldsmith were still living, their two oldest children, Caroline and Emma. Caroline was a widow, and Emma was divorced; both were living in Philadelphia. How did these two women, now in their seventies, survive without their husbands? A woman without a husband in the 1920s was unusual. The marriage rate in 1920 was the highest ever—92% of women over 15  were married. How did a divorced or widowed woman cope in those times?That is one part of the story in this post.

Jacob and Fannie were also survived by ten grandchildren: Caroline’s three children (Rena, Sidney, and Jessica); Philip’s three sons whose lives I wrote about here; Harry’s son Stanton, whose story is here; and Huldah’s husband Chapman Raphael and their three children, Herbert, Arthur, and Adelaide. This post will report on what happened to Caroline and Emma and the children of  Caroline and Huldah during the 1920s.

I had a hard time finding both Caroline and Emma on the 1920 census. I finally found Emma listed as Emma Coleman, a misspelling of her ex-husband Abraham Cohlman’s surname. At least I think this is Emma. She was living as a lodger in Philadelphia. The age is correct as is her birthplace of Pennsylvania, but her marital status is single, and the record reports her parents were born in Pennsylvania, when in fact Jacob and Fannie were both born in Germany. My assumption is that someone else in the household answered the enumerator’s questions and did not know where Emma’s parents were born, that she was divorced, or even how she spelled her surname.

As for Caroline, she also eluded me for quite a while because I was searching for a woman who was widowed, not married. But then I found a Caroline Rice married to a Jacob Rice who was a woolens salesman, and the light bulb lit up.

Nathan Rice, Caroline Goldsmith’s husband who died in 1913, had a brother J.J Rice; that brother had been the master of ceremonies at Rena Rice’s wedding. He had been living with Nathan and Caroline in 1900 when he was a wool salesman1 and in 1910 when he listed his occupation as a cloth salesman.2 In fact, in 1870 when Nathan and Caroline were living in Dubuque, Iowa, with Nathan’s parents, Nathan’s brother, Jacob J. Rice, was living in the household as well.3 In other words, Jacob J. or J.J. Rice had been living with his brother Nathan and sister-in-law Caroline for most if not all of their marriage.

A search of the Pennsylvania, Philadelphia Marriage Indexes, 1885-1951, database on FamilySearch confirmed that in fact Jacob J. Rice married Caroline G. Rice in 1915 in Philadelphia.4 So Caroline had married her brother-in-law J.J. Rice two years after the death of her husband (and J.J’s brother) Nathan.

As for Huldah’s children, her younger son Arthur Seligman Raphael and his wife Josephine Isaacs were living in Philadelphia in 1920; Arthur’s father Chapman and older brother Herbert were also part of that household. Arthur was a shoe salesman, and his brother Herbert sold shoe polish. Arthur and Josephine’s son Ross was born on March 10, 1920, in Philadelphia.8

Huldah’s daughter Adelaide and her husband Harry Hahn were living with their sons in Washington, DC, in 1920; Harry was still a shoe merchant.9

The 1920s were a relatively quiet decade for the family, at least in terms of major lifecycle events.  In 1924, Ruth Sondheim, daughter of Jessica Rice and Philip Sondheim and granddaughter of Caroline Goldsmith Rice, married Adrian Kramer in Brookline, Massachusetts.10 Adrian’s background is a mystery.   According to his military record from World War I (see below),  and his World War II registration card, 11 he was born in New York City on December 14, 1896. But despite searching in numerous places for all Kramers and all Adrians within two years of that date, and all boys born on that date, I have not found his birth record. Perhaps he was born with a different name.

I also cannot find Adrian on the 1900 census; the first record I have for him is the 1905 New York State census, when he was living on West 88th Street in the household of Maier Kramer. Adrian was eight years old and listed as Maier’s son, but there was no wife. Also living in the household were six of Maier’s siblings: Sandilla, Joseph, Leo, Eva, David, and Minnie. At first I thought Sandilla or Eva might have been Maier’s wife, but earlier records show that they were in fact his sisters.

The 1910 census also shows the six Kramer siblings living with Adrian on West 88th Street, but now Adrian is identified as their brother.  That seems like an error—he was fifteen and the youngest of the other “siblings” was thirty. And earlier census records show that Maier’s father was born in about 1837 and his mother was born in 1845; it seems quite unlikely that they had a child in 1896. According to the 1910 census, all of the Kramer siblings were single, except for Sandilla, who was divorced. I can’t find them on the 1920 census, but in both 1930 and 1940, the siblings were still living together, and all were unmarried, except Sandilla, who now reported on both that she was a widow.

So who was Adrian? I don’t know who his parents were, but I do know that he was in the United States Marine Corps during World War I, serving overseas in France from August 26, 1918, until January 13, 1919. 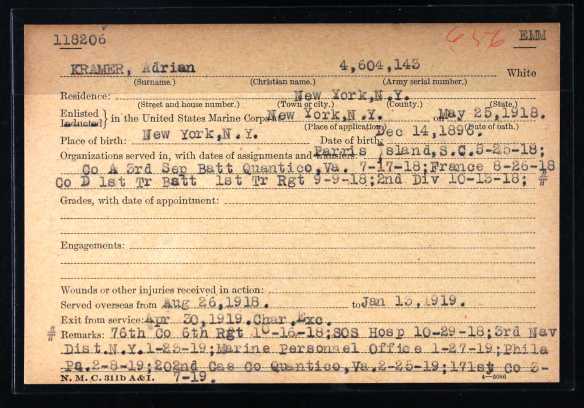 By 1921 he was living in Boston, working as a salesman.12 And in 1924, he married my cousin Ruth Rice Sondheim. Two years later they had their only child, a daughter named Natalie.13

On December 3, 1925, Hulda Goldsmith’s husband Chapman Raphael died in Washington, DC. He was 75 and had been sick for some time.

The last family lifecycle event in the 1920s came on July 10, 1928, when the oldest of Jacob and Fannie Goldsmith’s children passed away.  Caroline Goldsmith Rice died from bronchopneumonia at age 79. The informant on the death certificate was her husband/brother-in-law, Jacob J. Rice. And the doctor who signed the death certificate was S. Byron Goldsmith, her nephew and the son of her long-ago deceased brother, Philip Goldsmith. I was heartened to see that Philip’s son had stayed in touch with his father’s family even though he had been taken in and cared for by his mother’s family when his parents were killed in 1896.

Thus, by 1930, Emma Goldsmith Cohlman was the only surviving child of Jacob and Fannie Goldsmith. Unfortunately, the 1930s would bring the family more heartbreak.