Most of us have heard of a husband and wife dying within weeks or months of each other—sometimes just days. There is apparently some real science behind the phenomenon of long-time spouses dying close in time. In the Jacob Goldsmith family, it happened twice within just a few years to two different couples.

By 1930, as seen in my earlier post, Emma Goldsmith Cohlman was the only surviving child of Jacob and Fannie Goldsmith. On the 1930 census she was living in Philadelphia, claiming to be a 68 year old widow though she was in fact 79 and divorced. There were also ten grandchildren of Jacob and Fannie living in 1930. That would not be the case ten years later.

Huldah’s children were also well-settled in 1930. Her two sons, Herbert and Arthur Raphael, were living in the same household in Philadelphia, along with Arthur’s wife Josephine and ten year old son Ross.  Arthur was now an insurance salesman and Herbert a commercial salesman. 5 Their younger sister Adelaide and her husband Harry W. Hahn and their two sons were living in Washington, DC, where Harry continued to work in the family shoe business.6

As I wrote earlier, Philip Goldsmith’s three sons were all living in Philadelphia in 1930; Byron and Jerome were married, and Herbert continued to live with his mother Nellie’s siblings. As for Harry Goldsmith’s biological son Stanton Loeb Dreifus, he was living in Queens, New York, with his wife and son and was an iron and steel broker, like his step or adoptive father Emanuel Dreifus.

Thus, as of 1930, all looked fairly calm for the grandchildren of Jacob and Fannie Goldsmith. But within ten years, the family would suffer one heartache after another with just a few occasions for celebration.

Although Harry and Adelaide (Raphael) Hahn’s two sons were married in the 1930s, both weddings were overshadowed by deaths in the family. On January 22, 1934, their older son, Harry W. Hahn, Jr., married Elizabeth Hofheimer in Norfolk, Virginia. 7 Elizabeth was the daughter of J.Caesar Hofheimer and Bessie Hirschler of Norfolk.8 The bride and groom were both 24 years old.

The Washington Star provided this description of the wedding:

The youthful bride, who was given away by her brother, Mr. Edward Hofheimer, looked lovely in her wedding gown of aqua marine crepe, trimmed in Summer ermine. She carried a bouquet of lilies of the valley, a white bible that was used by the bridegroom’s mother and a duchess lace handkerchief that was carried by the bride’s mother. A family dinner followed the ceremony and at 7:30 o’clock in the evening Mr. and Mrs. Hahn left by boat for New York and sailed on Wednesday, January 24, for Bermuda to spent two weeks. On their return they will visit the bridegroom’s parents at their home…for a few days before going to their future home in Baltimore, where they have taken an apartment in Ingraham Hall.

The bridegroom had for his best man his brother, Mr. Arthur Hahn, who is a senior at Yale College. The bridegroom is a graduate of Yale, the class of ’31. ….

Imagine Jacob and Fannie’s pride if they’d lived to see two great-grandsons at Yale. In four generations the family had gone from new immigrants to Ivy League graduates.

But that pride and the joy of the newlywedded couple were soon eclipsed by sadness. Less than a year after the wedding, Harry W. Hahn, Sr., Adelaide’s husband, died “after a long illness” at age 54 on December 8, 1934. He would have turned 55 nine days later. His obituary reported that he had gone to Phillips Exeter Academy, spent a year at Harvard, and graduated from Georgetown University Law School before going into the shoe business established by his father and uncles. He was also active in many civic, business, and charitable organizations. 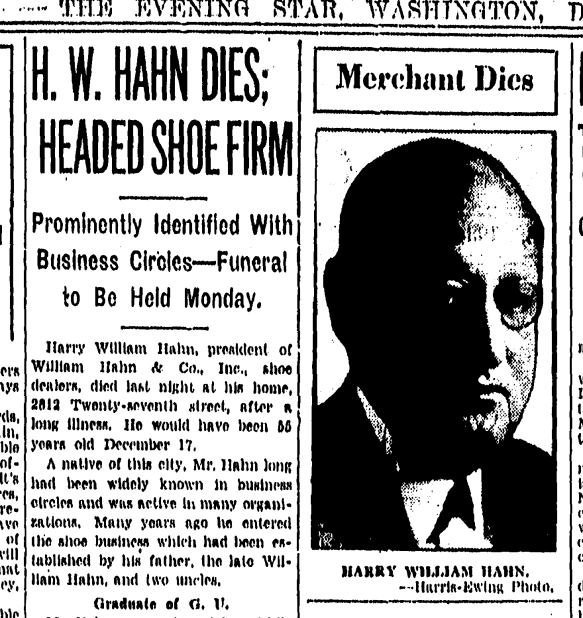 A few months later the family gathered again to celebrate a wedding, this time for Arthur Hahn, Adelaide and the late Harry Sr.’s younger son. On June 20, 1935, Arthur married Maxine Goodkind in Chicago.9  She was the daughter of Abraham Goodkind and Harriet Steele. She and Arthur were only 21 years old when they married.  This wedding did not receive the big write-up in the newspaper that Harry Jr.’s wedding had received eighteen months earlier and was presumably a less elaborate affair, given the recent death of Arthur’s father. The paper did report that they were married at the bride’s home in Chicago and would be returning to Washington where they would live with Arthur’s mother, Adelaide. The paper also reported that Arthur’s mother, his brother Harry Jr., and Harry’s wife Elizabeth also came to Chicago for the wedding.

Once again, the joy of the newlyweds was crushed by another death. On September 30, 1935, just three months after Arthur and Maxine’s wedding, Adelaide Raphael Hahn died from a sudden heart attack after being involved in a three-car accident in Riverdale, Maryland.10 According to the report in the Washington Evening Star, “[a]fter the accident Mrs. Hahn alighted from her car and talked to the police and the drivers of the other machines. Suddenly she collapsed and fell to the ground. She died shortly after Dr. Martin Keane arrived.”

The article also reported that Adelaide’s new daughter-in-law Maxine was in the car with her at the time as was her “colored maid,” Florence Walker, who suffered a possible fractured pelvis. Maxine and the other two drivers were unharmed. It still floors me every time the blatant racism of those times raises its ugly head. Why comment at all on the race of the maid? No mention was made of anyone else’s race. It is so apparent that those who were not white were considered “the other” and that it was considered totally acceptable for the press to make that distinction.

In the space of less than two years, Arthur Hahn and Harry Hahn, Jr. had both experienced the joys of getting married and the heartbreaks of losing both of their parents.

The tragedies suffered by the extended family did not stop there.  Three members of the family died in December, 1936. First, on December 5, 1936, Martha Sondheim Rice, the wife of Sidney Rice, died from lung cancer at age 65; her brother Philip was the informant.

Then four days later on December 9, 1936, Martha’s husband Sidney Rice died at age 63 from a cerebral thrombosis. Once again, Philip Sondheim was the informant. Remember that Philip was not only Martha’s brother, but was also married to Sidney’s sister Jessica. That is, within four days Philip and Jessica each lost a sibling, and those siblings themselves had been husband and wife. Sidney and Martha were truly a couple who were together not only in life but in death. 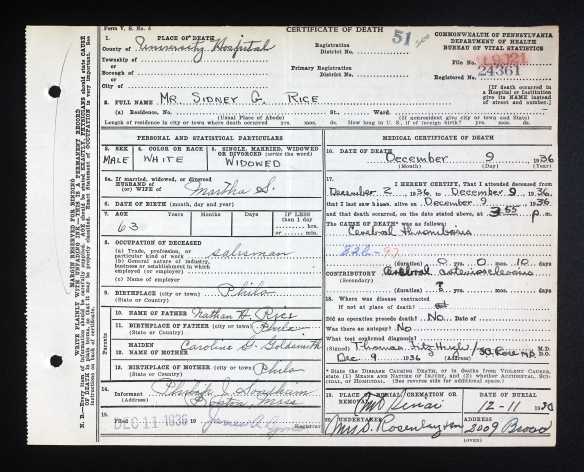 In less than a month, the family had suffered three losses.

There was, however, one happier occasion during 1936. Huldah Goldsmith Raphael’s older son J. Herbert Raphael married Matilda Wishoff, the daughter of two Russian immigrants, Hyman Wishoff and Rebecca Cohen. Matilda was born in Philadephia on September 20, 1909, not long after her parents and older siblings had immigrated; her father was a barber.  When they married, Matilda was 27, Herbert was 54.11

There was one final loss in the 1930s when Harry Goldsmith’s biological son Stanton Loeb Dreifus died on July 11, 1938. He was 53 years old. I don’t know how much, if any, contact he had had with Harry or Harry’s family after his mother remarried in 1901, but as he was my biological relative, I wanted to mark his passing as well. He was survived by his wife and one son. Another son had died as a toddler in 1915.12

32 thoughts on “Til Death Do Us Part”