By 1870 many members of the Goldschmidt clan had left Germany and settled in Pennsylvania.  My four-times great-uncle Simon Goldschmidt and all his children had emigrated starting in the 1840s and were, for the most part, living in western Pennsylvania by 1870. 1 During this same period six of the eight children of my three-times great-grandparents Seligmann and Hincka (Alexander) Goldschmidt had settled in Philadelphia: Jakob, Levi, my great-great-grandmother Eva, Abraham, Meyer, and Rosa. They were all living in Philadelphia by 1870. Of Seligmann’s family, only Sarah and Bette were still in Germany as of 1870. 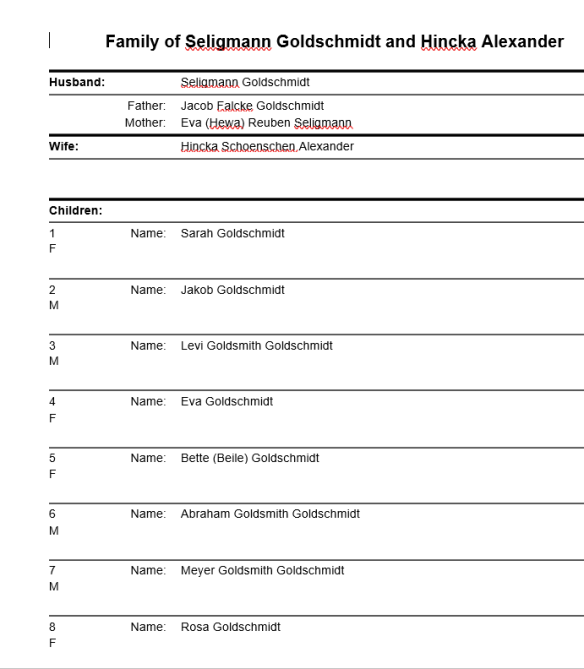 Sarah would also eventually join the family in the US, but only after her children had emigrated. In the 1870s and 1880s, all but one of Sarah’s eight surviving children2 came to the United States, and eventually so did Sarah and her husband Abraham Mansbach II. This is their story.

Although I cannot find passenger manifests for all them, it appears that the first to arrive was Merla/Amalie Mansbach, who sailed to the US in 1872 with Henry Schoenthal and his new wife Helene Lilienfeld, as I discussed here.3 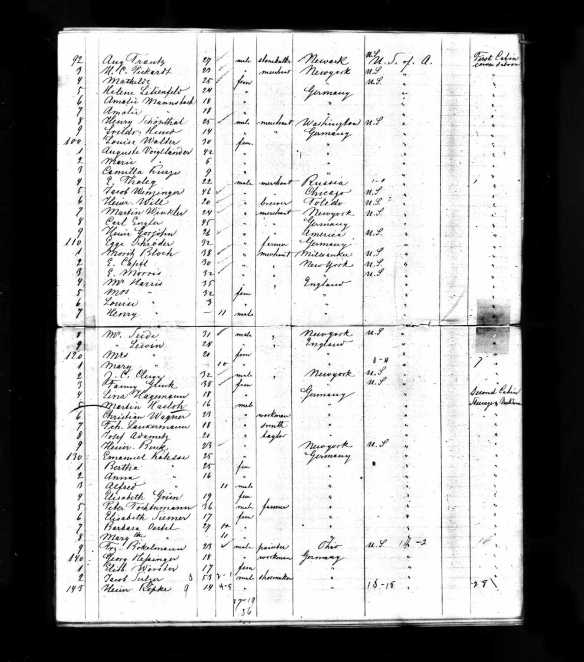 I have no record of Amalie from the time of her arrival until the 1880 census, but I assume she must have been living in Pennsylvania, probably in Philadelphia, because according to the 1900 census, in 1879, she married Henry Langer. Henry was 22 years older than Amelia, born in 1831 in Austria; he had immigrated to the US in 1856, and in the 1870s he was living in Philadelphia, working as a furrier, according to the Philadelphia directory for 1870 and a newspaper listing in 1877.4

Amalie and Henry had relocated to Denver by December 17, 1879,5 when their first child, Joseph Henry Langer, was born. According to the 1880 census, Henry continued to work as a furrier in Denver:

I wondered what had drawn them to Denver. I couldn’t find any other Langers living there at that time, but I then discovered that Colorado had drawn other members of Amalie’s extended family, including her brother Berthold.

Berthold may have been the next child of Sarah and Abraham II to arrive from Germany; although I cannot find a passenger manifest for him, the 1920 census reports that he immigrated to the US in 1874.6 In 1877, he is listed in the Philadelphia directory working as a clerk.

But by 1880, he also had relocated to Trinidad, Colorado, where he was living with his cousin Abraham Mansbach V,  the grandson of Marum Mansbach I. Abraham V was a merchant, and Bert was working as a clerk, presumably in his cousin’s store.

Abraham V had been living in Colorado for some time, as he was naturalized in Denver in 1873,7 so perhaps that was what had drawn his cousin Amalie and her husband Henry Langer to Denver by 1879.

Trinidad was incorporated in 1876 and became the supply and transportation center for the region’s coal mines. The coal from these mines was highly prized for its quality in creating coking fuels for Colorado’s smelters. As the mines and smelters of Colorado grew into a major industry, Trinidad prospered and became a wealthy commercial center full of stunning Victorian homes and buildings.

Thus, Abraham Mansbach V and his cousin Berthold Mansbach must have chosen Trinidad as a place of great economic opportunity. As they say on that old commercial for Barney’s in New York City, all those people were going to need clothes.

UPDATE: Thanks to Sharon Haimovitz-Civitano of the Branches of our Haimowitz Family Tree and Branches on Civitano Tree blogs, I now have additional insights into why the Mansbachs ended up in Trinidad.  Those insights will be discussed in a later post, but in short, there were members of the extended Goldschmidt-Mansbach family living in Trinidad even before Berthold Mansbach and his cousin Abraham Mansbach V arrived.

But not all the Mansbach siblings chose to settle out west. Sarah and Abraham II’s oldest son Leiser/Louis Mansbach came to the US on December 16, 1876:

In 1880, he was living with my great-great-grandparents, Gerson Katzenstein and Eva Goldschmidt, who was his aunt, his mother Sarah’s sister. My great-grandmother Hilda, who was then sixteen, was also living at home and thus must have known her first cousin Louis quite well. Louis was 31 years old and was a veterinary surgeon.

I do not have ship manifests for three of the remaining children of Sarah Goldschmidt and Abraham Mansbach II, Hannah, Meyer, and Julius.  I have tried searching on Ancestry and FamilySearch; I tried using stevemorse.org and wild cards and various spellings and different date ranges. Nothing. For Julius, as discussed below, I even had a date of arrival and ship names from his later passport applications, but still—no manifest.  If anyone is willing to try with fresh eyes, I’d be very grateful. But for now I have to rely on other documents to estimate the dates of arrival for Hannah, Meyer, and Julius. Since none of these three appeared on the 1880 census, I am assuming they arrived sometime after the taking of that census in the spring of 1880.

Census records also conflict regarding the arrival date for Meyer Mansbach. The 1900 census reports that he arrived in 1879, but the 1910 and 1930 census records both report 1882 as his date of arrival.9

For Julius, as noted above, I found information about his arrival on his passport applications, of which there were three—in 1900, 1903, and 1908. All three provide the same date of arrival (June 12, 1881) and the same port of departure (Bremen), but all three have different names for the ship. The 1900 application says he sailed on the Elbe, the 1903 says the Weser, and the 1908 says the Werra.

Julius obviously remembered more or less when he arrived (or maybe departed from Germany), but not the name of his ship. Taking the usual rule that the record made closest in time to an event may be the most reliable, I focused on manifests for the Elbe.

I found a manifest for the Elbe arriving in New York on July 8, 1881, with a passenger named Julius “Halsbach” aged 26 (so ten years older than Julius would have been). That seemed the closest match, and I could not find anything close in date or name on the Weser or the Werra.

It thus seems reasonable to conclude that Hannah, Meyer, and Julius had all arrived by 1881. And so by 1881 all Sarah and Abraham’s eight living children except Kathinka had left Germany.

The following year on October 23, 1882, they were joined by their parents, my three-times great-aunt Sarah Goldschmidt and her husband Abraham Mansbach II, and their youngest daughter Kathinka. Also apparently sailing with them was a twelve year old girl named “Kath. Goldschmidt.” I have yet to identify who this was, but I assume she was the child of one of the Goldschmidt cousins still in Germany.

With that final arrival, all but one of the eight children and almost all the grandchildren of my three-times great-grandparents Seligmann Goldschmidt and Hincka Alexander were living the US. Only Bette Goldschmidt and her family were still in Germany.10 It must have been hard to leave Bette behind, but the choice to leave Germany was in the long run a fortunate one for the family of Seligmann and Hincka. And for all of us who are their descendants.

(A big thank you to Amberly Peterson Beck of The Genealogy Girl blog for her brilliant post, Tuesday’s Tip: Awesome & Easy Source Citations in WordPress, which explained how to create footnotes for source citations in an easy and quite useful way. This is my first post experimenting with this technique. Thank you, Amberly!)

23 thoughts on “Where Are Those Missing Manifests? Sarah Goldschmidt Mansbach and Family”