…[T]he locomotive of the Reading train…struck the first car full in the centre, throwing it far off the track into a nearby ditch, and completely submerging it. The second car of the West Jersey train was also carried into the ditch, the third and fourth cars begin [sic—being?] telescoped. The engine of the Reading train was thrown to the other side of the track, carrying with it the first coach.

A few minutes after the collision, to add to the horror of the situation, the boiler of the Reading locomotive exploded, scalding several to death and casting boiling spray over many of the injured passengers.

One of the sub-headlines to this article read, “Five Loaded Passenger Coaches Crushed into Kindling Wood,” a reminder that train cars were made from wood, not steel, in those days. 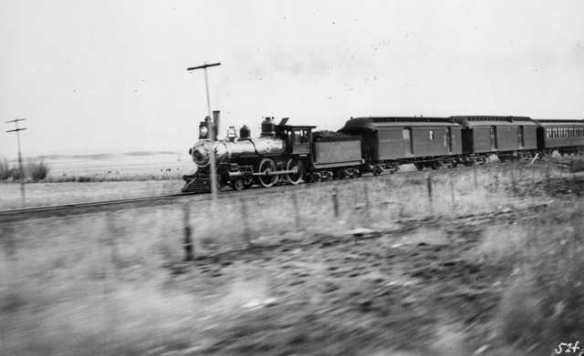 An example of an 1890s passenger train
https://commons.wikimedia.org/wiki/File%3AATSF_1890s_passenger_train.jpg

The article then described the horrifying scene when rescue efforts began:

It was a gruesome sight presented to onlookers as the mangled and burned forms of the dead were carried from the wreckage which bound them and laid side by side on the gravel bank near the track, with no other pall than the few newspapers gathered from the passengers.2

An investigation into the cause of the accident soon determined that it was the engineer of the Reading Railroad train, Edward Farr, who had been primarily at fault. There was evidence that the Reading train had been traveling at a speed of 45 miles per hour and that Farr had failed to heed the danger signal in time to avoid the collision with the West Jersey train.

However, there was apparently a practice in that area that gave express trains like the Reading train the right of way at crossings over smaller trains like the West Jersey. The tower man in control of the signals disregarded that practice by giving the danger signal to Reading and the go-ahead signal to West Jersey. There was also testimony that Farr was a man of good character and not reckless or careless. Farr himself was killed in the crash; The New York Times reported that when his wife was informed of his death, she collapsed in shock and also died, but The Philadelphia Inquirer in its coverage of Farr’s funeral reported that his his widow attended the funeral.

On August 8, 1896, the coroner’s jury returned a verdict holding Edward Farr primarily at fault for failing to heed the danger signal, but also found that the tower man and the West Jersey engineer had contributed to the tragedy.3 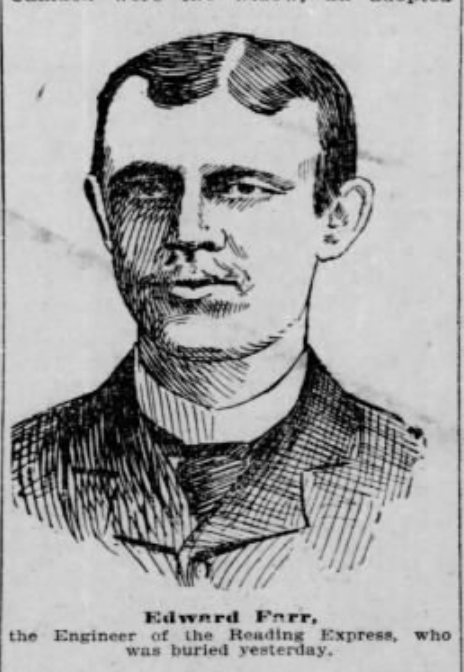 In the end, fifty people died in this horrific accident, including two of my Goldschmidt relatives, my cousin Phillip Goldsmith, son of Jacob and Fannie, and his wife Nellie Buxbaum.  Phillip was forty years old, and Nellie was 33; they left behind three sons, Sidney Byron, who was fourteen, Herbert Nathaniel, who was thirteen, and Joseph Jerome, who was only eight years old.

In its coverage of this disaster, The Philadelphia Times reported the following about Phillip and Nellie Goldsmith:

Both Mr. and Mrs. Goldsmith were said to be particularly cautious in respect to public travel and rarely ventured abroad except on business, and Mr. Goldsmith’s long-time employee, Henry Kirchoff, expressed great surprise this morning that the couple should have ventured on this excursion at all.4

The Tyrone Daily Herald of Tyrone, Pennsylvania, reported that Phillip and Nellie had died “hand in hand.”5  The Philadelphia Inquirer covered the funeral of Phillip and Nellie and included these sketches as well as details of the funeral and a list of those who attended, including Phillip’s mother Fannie and his siblings. The rabbi in his eulogy “paid high tribute to the departed, dwelling especially on the honorable career of Mr. Goldsmith and the sweet, charitable disposition of his wife.”6 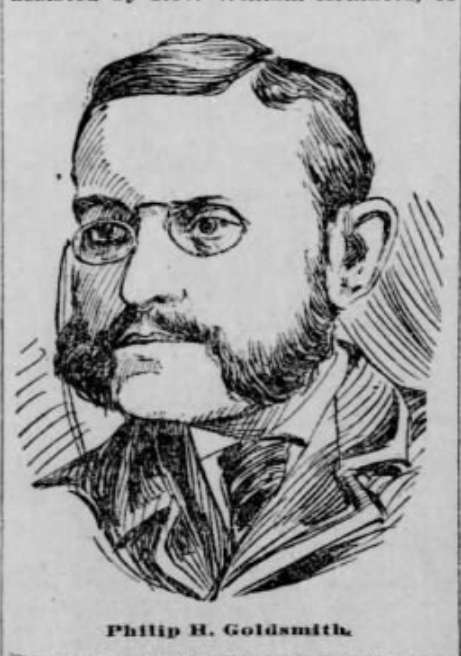 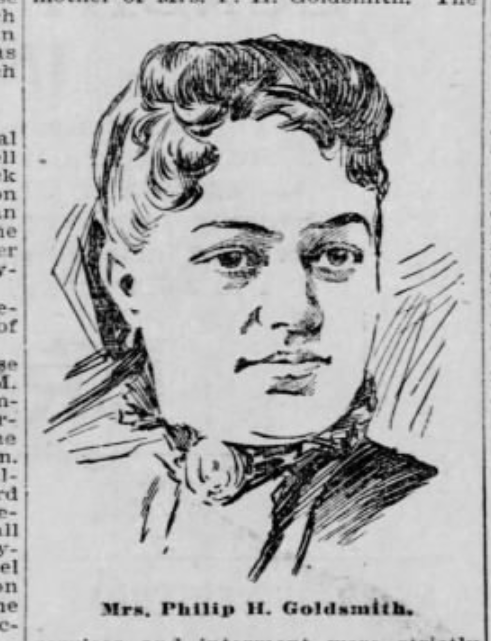 All in all, this was one of those terrible tragedies where human error, not malice, was to blame. For the family of Phillip and Nellie Goldsmith, it must have been devastating.

Their three sons went to live with Nellie’s family; on the 1900 census they were living in Philadelphia in the household of Nellie’s widowed sister Hortense Buxbaum Strouse along with Nellie’s mother and other siblings. 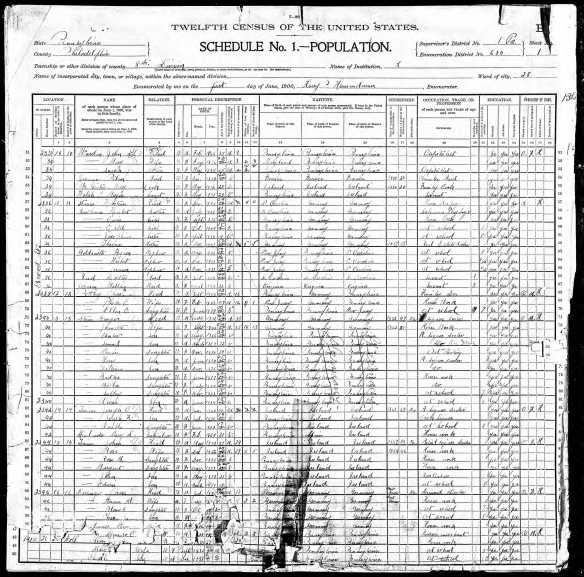 By 1910, the three Goldsmith orphans were young men in their twenties. Herbert (26) and Jerome (21) (as he was known) were still living in Philadelphia with their aunt Hortense as well as her brother and three sisters, all of whom were unmarried. Herbert and Jerome and their uncle Herbert Buxbaum were all working in a lithography business: 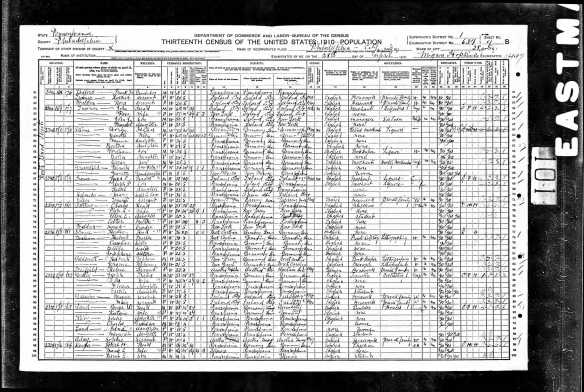 The oldest Goldsmith son, Sidney Byron (later known as Byron) was 27 in 1910 and was a physician in Philadelphia.7 He was a graduate of the University of Pennsylvania.  Here he is in the 1905 yearbook of the university:

Note the resemblance to his father. Byron married Mary Elizabeth Long on March 1, 1917.8

All three Goldsmith brothers registered for the World War I draft. Byron’s registration did not disclose any important additional information: 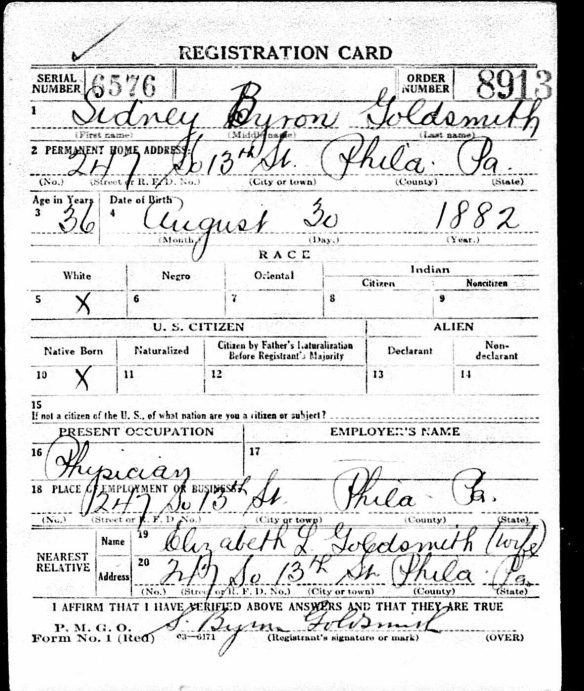 Herbert’s registration revealed that he was working in the tire manufacturing business: 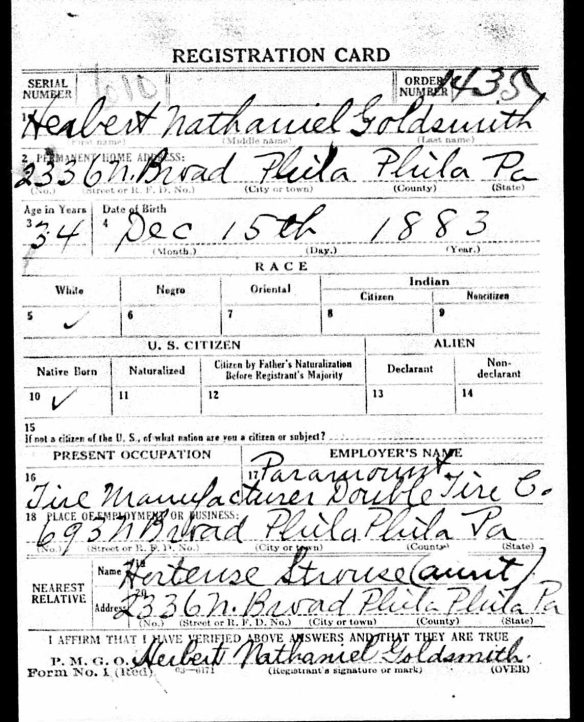 According to Jerome’s registration, he was working as a sales manager for a company called Lindsay Brothers, Inc. He claimed an exemption from the draft based on the fact that he had “two maiden aunts” who were solely dependent on him for support. He also claimed disability based on vertigo, varicocele, and hemorrhoids. Varicocele is a condition of varicose veins on the testicles, sometimes leading to infertility.

In 1920, Jerome and Herbert were still living with their aunt Hortense and her siblings; now both brothers were working in the tire business, as were two of their Buxbaum uncles.9

Their older brother Sidney Byron and his wife Elizabeth (as she was known) had a child on January 12, 1920,10 and were still living in Philadelphia where Byron was practicing medicine in 1920:

On November 6, 1929, Jerome Goldsmith married Berda Gans Marks,11 who was a Philadelphia native, daughter of Emanuel Marks and Carrie Gans. He was forty years old, and Berda was 37.  In 1930, they were living in Philadelphia, and Jerome was still working in the tire business as a salesman. Berda was working as a secretary in a medical practice—perhaps that of Jerome’s brother Byron?12

Byron and his family were also still living in Philadelphia in 1930, and Byron continued to practice medicine.13  Herbert, the middle brother, continued to live with his aunts and now listed himself as the proprietor of the tire business.

Ten years later, Herbert was still living with his aunts, but now was a broker in the wholesale jewelry business. Perhaps his tire business did not weather the Depression well. He was now 56 years old although the census reports that he was only 52.14 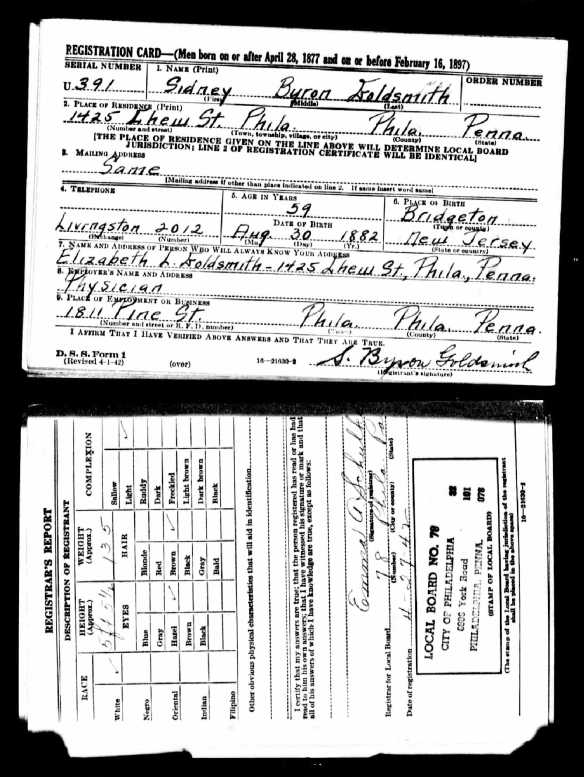 Herbert was the tallest of the brothers—six feet tall whereas the other two were both 5’ ” 6″ or so. Herbert noted that he had a “cast” in his right eye—a small brown spot. He was now working for a transit company. 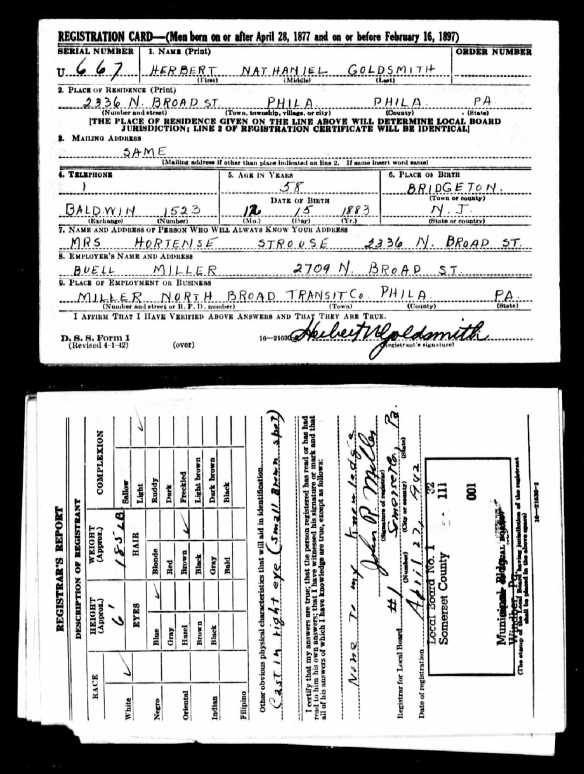 This time Jerome did not claim the same disabilities that he had in the earlier draft, but did note that he had had two fingers “cut” by an electric saw and tattoos on both arms: 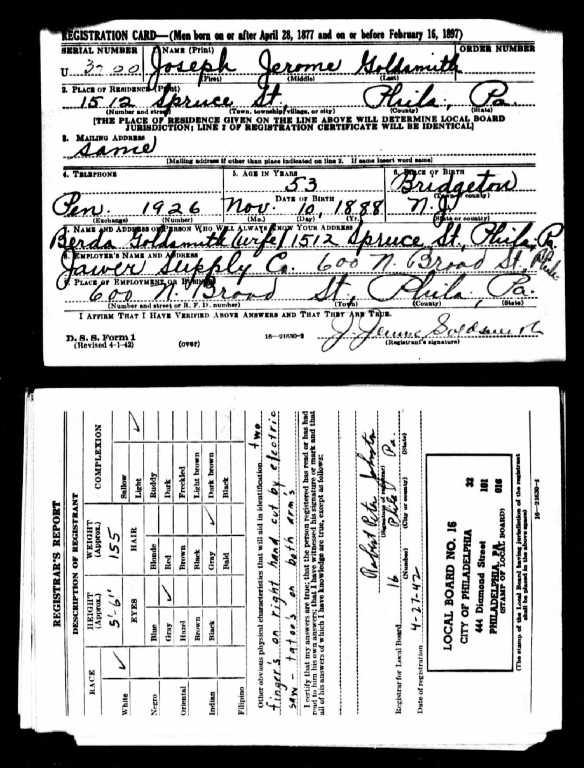 Five years later on April 16, 1947, Herbert Goldsmith passed away at the age of 63 from acute coronary thrombosis. His aunt Hortense Strouse, with whom he had lived since being orphaned as a young boy in 1896, was the informant on his death certificate.  The death certificate reports that he was a statistician, something that had not been at all evident from his draft or census records. 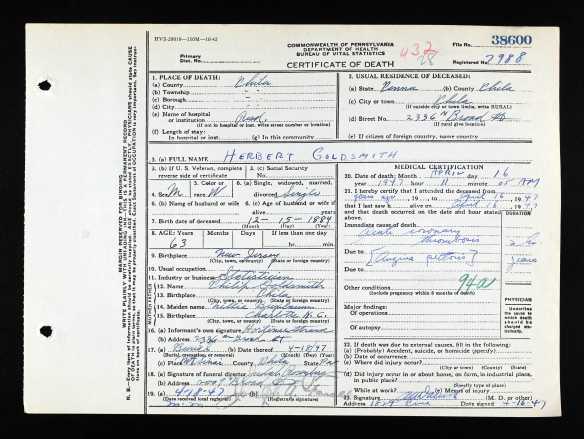 The two other Goldsmith brothers lived long lives. Jerome died at 86 on July 21, 1975. 17 His wife Berda lived to 97, dying on October 27, 1989. What her obituary revealed that had not been revealed by the official records was that she was an accomplished pianist and that she and her husband had been quite generous contributors to charitable organizations.  One other revelation: at some point after 1940 Jerome had gone into the food importing business. 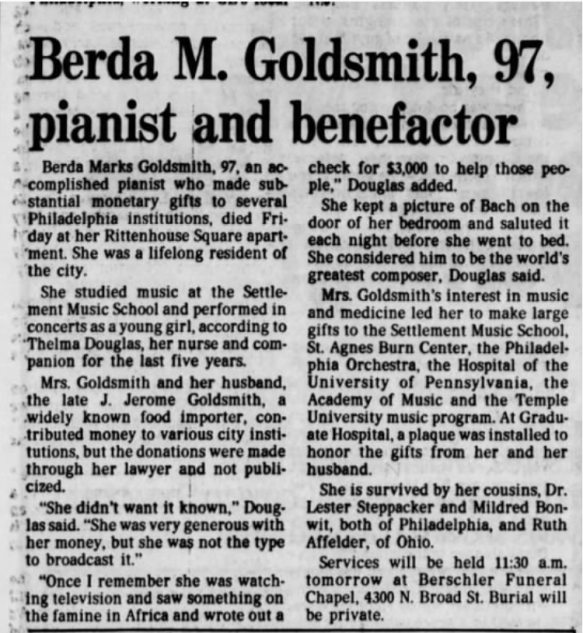 Byron died just a few months after his brother Jerome on November 3, 1975; he was 93.18 His wife Elizabeth had predeceased him on May 28, 1973, when she was 85.  They were survived by their daughter and grandchildren, the only remaining descendants of Philip Goldsmith and Nellie Buxbaum.

The story of the three orphaned Goldsmith brothers is another story of human resilience. Having lost their parents in a horrendous tragedy when they were so young, it’s remarkable that these three boys seemed to have overcome those losses and survived. Perhaps the credit goes to their parents for whatever strength and love they gave them as children and to their aunt Hortense and their other aunts and uncles for raising them after they’d lost their parents in 1896.