As seen in my last post, Alfred Goldsmith’s ill-fated 1905 marriage to Beatrice Miller ended in divorce in 1913, and I was unable to find anything about the eight years in between. But what happened to Alfred after 1913?

The first record I have for Alfred after his 1913 divorce was a record of his second marriage on July 24, 1918, to Ray Solomons in Troy, New York.1 Ray was the daughter of Myer Solomons and Caroline Weinberg. Myer was originally from Warsaw, Poland, and Caroline from Austria. They had both immigrated to England, where Ray was born in 1891. The family immigrated to the US in 1910 when Ray was nineteen. On the 1915 New York State census, her father listed his occupation as a dyer; later records show he was in the fur business. Ray was employed as a bookkeeper in 1915. She was living with her family in the Bronx. 2

So why did Ray and Alfred marry in Troy, New York, a city about 150 miles north of New York City? At first I worried that this was another elopement, and perhaps it was. But happily for Ray and Alfred, this marriage lasted. Ray was 27 when they married, Alfred was forty. They stayed together until Alfred’s death. It does not appear that they ever had children.

Like his half-siblings Milton and Emily, Alfred loved books. He had a life-long interest in literature and in particular authors: Lewis Carroll, Edgar Allen Poe, and especially Walt Whitman. According to his obituary in The New York Times, Alfred “was only twelve when he became captivated by Whitman’s poetry and started to collect rare Whitman editions.” 3 That interest in Whitman stayed with him throughout adulthood.

When Alfred registered for the draft on September 12, 1918, six months after their wedding, he and Ray were living at 2593 Eighth Avenue in New York City, and his occupation was “bookseller” at 42 Lexington Avenue. That would remain his place of business for the rest of his life. Alfred’s bookstore, known as At the Sign of the Sparrow, became very well-known, as we will see. 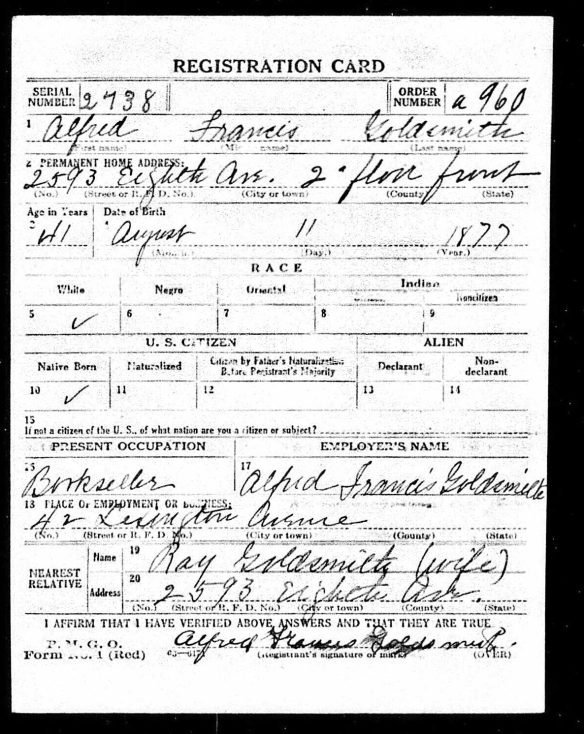 In 1920, Alfred and Ray were living at 304 Second Avenue in New York City, and Alfred listed his occupation on the census as “Books” in his own business.4 The 1922 New York directory also has his occupation simply as “books,” and the 1925 New York State census lists his occupation as “bookseller.”5

In 1922, Alfred and Carolyn Wells, the author of over 170 books for adults and children, collaborated on The Concise Bibliography of the Works of Walt Whitman (Houghton Mifflin, Boston, 1922), which was “affectionately dedicated to Ray S. Goldsmith.” The book is, as the title indicates, a bibliography of all the books written by Walt Whitman and all the books written about Walt Whitman. It was for many years considered one of the authoritative works of scholarship about Whitman.6

Alfred Goldsmith and Carolyn Wells also collaborated on another project, editing a collection of Whitman’s essays entitled Rivulets of Prose (Greenberg, Publishers, Inc., 1928). That also was dedicated to Alfred’s wife Ray: “With Affection to Ray S. Goldsmith for Her Sympathetic Assistance.” It is evident from the foreword to this collection that Alfred and his co-editor had quite a scholarly approach to Whitman and his work. 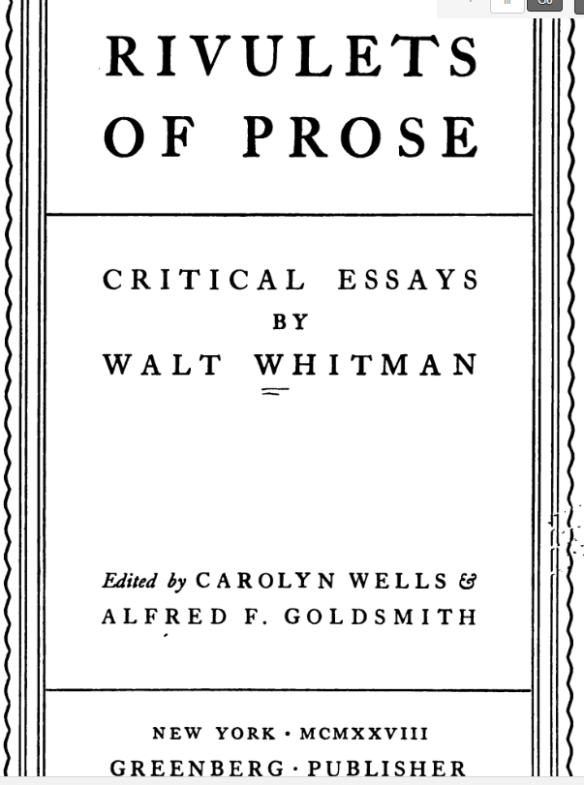 In addition, Alfred organized a major exhibit at the New York Public Library about Walt Whitman in 1925. He collected from many private collectors Whitman’s manuscripts and books and other materials and prepared them for the exhibit. According to the November 8, 1925 Brooklyn Daily Eagle (p. 11), interest in “Whitmanania” was so intense that the price of these materials had risen sharply and were mostly in the hands of private collectors; the purpose of the exhibit was thus to give the public a chance to see these materials.

Alfred was very active in book auctions, buying and selling first and other editions of books on his own behalf and for collectors. The Harrisburg Telegraph reported this amusing story about Alfred’s experiences at one book auction:7

It will cost you money if you arrange signals with a bookseller at an auction and then forget those signals. The idea is Alfred F. Goldsmith’s, a bookseller, and it grew out of this incident.

At one of the numerous book auctions (New York has dozens of them each month) a wealthy collector authorized Goldsmith to purchase a certain volume for him. “I’ll pay as much as $125,” he instructed the seller, who was to do the bidding for him.

“But,” explained Goldsmith, “It would be a crime to let the purchase fall through if it could be effected for a few extra dollars.”

“Then,” said the client, “keep bidding until I stop you.  I’ll be there watching the sale.  When you see me remove my glasses, drop out; that will be the signal.”

Thus agreed, both arrived at the auction. But Goldsmith soon found himself several rows removed from his client and unable to keep in oral connection. It didn’t take the book long to climb. In a trice, it was up to $125, the agreed sum. Goldsmith dropped out, for just at that moment his client casually removed his glasses.

The bidding soared. Soon it had reached $325, and Goldsmith, glancing toward his client, saw that gentleman nod and refit his glasses. Just as he launched a bid, however, off came the glasses. Then the client hastily put them on again.  Reassured, Goldsmith then began to bid in earnest, finally winning for $375.

“Congratulations,” called Goldsmith to his client, “you got it.”

“Got what?” asked the client, not comprehending.

“Why, the book,” said Goldsmith.

“Didn’t I tell you,” gasped the fellow—“to stop at $125?” Goldsmith then reminded him of the signal by glasses.

“You know,” he said sheepishly, “I’d forgotten all about that.” Then he wrote out his check for $375 and went out to his limousine, smiling at himself.

A newspapers.com search turned up numerous articles about Alfred’s success at book auctions. For example, in March 1936, Alfred bid successfully for a rare book written by Lewis Carroll, one of his other favorite authors. The Central New Jersey Home News wrote:8

The magic name of Lewis Carroll, author of “Alice in Wonderland,” made book collectors bid frantically for a little known, privately printed book at a sale here. When the hammer banged, its price was announced at $310. The purchaser was Alfred F. Goldsmith, Carroll expert.

The Reading (Pennsylvania) Times reported on Alfred’s acquisition and sale of a rare book of Edgar Allen Poe’s poetry, Tamerlane and Other Poems, in April 1938; it described the book as “the scarcest and most valuable book of poetry ever published in America.” Poe, as noted above, was another of Alfred’s favorite authors.

These are just two of the many articles I found reporting on Alfred’s purchases of rare books at auctions.

But Alfred was probably best known for his bookstore, At the Sign of the Sparrow, which was a well-known landmark in New York City. In my search to find a photograph of the store, I landed on the website of The Old Book Table, “a social club composed of antiquarian booksellers and those engaged in professions related to antiquarian bookselling.” According to the website, it is the oldest such club in the world, founded in 1931 in New York City.

Alfred was one of the early members of the club, and the history page on the club’s website had both a photograph of Alfred and one of his drawings. The history page was excerpted from a book by Joseph J. Felcone: The Old Book Table. A Record of its First Seventy-Five Years, 1931–2005 (New York: The Old Book Table, 2006).  Through the magic of the Internet I was able to contact Mr. Felcone and, with his help, learn a great deal more about my cousin Alfred. That merits a whole separate post. 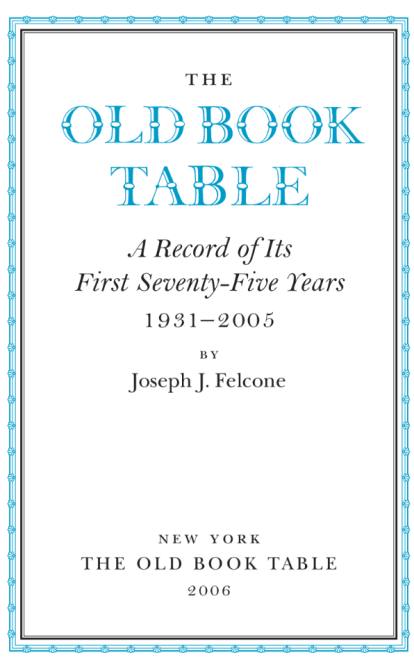