Remember how at the end of my last post I alluded to the 1920 and 1923 passports of Alice and Louis Goldsmith and how they helped me solve a different mystery? Well, this is it.

When I was researching Bertha Goldsmith Weinhandler/Wayne prior to delving into the research of her younger siblings, Alice and Louis, I discovered a marriage record for her in 1923.  According to the New York, New York, Marriage License Index database on Ancestry.com, Bertha Wayne married a man named Frederick Newman on May 21, 1923.1

I was surprised because after all, in 1920 she was still married to and living with Sampson Wayne.2  I thought perhaps Sampson had died, but I found him on the 1930 census in New York, which listed his marital status as divorced.

When had Bertha divorced Sampson? How had she married someone else so quickly?  Sampson died in 1931,3 but I could not find an obituary or any other news article or record that explained what had happened to him or his marriage to Bertha. And who was Frederick Newman, her new husband? I was mystified, but continued on with my research of Alice and Louis.

Then, when I could not find either Alice or Louis Goldsmith on the 1920 census, I looked more closely at their passport applications from 1920 and 1923, as noted in my last post. On Alice’s 1920 application, I saw that in addition to having her sister Bertha attest to her birth date on her passport application, there was a witness statement from Frederick Newman, who attested that he had known Alice for ten years.

So Bertha’s second husband Frederick Newman had known Alice Goldsmith since 1910? When Alice was still living in Philadelphia? How could that be? Bertha was married to Sampson at that time. I wondered: Had Frederick Newman been an old friend who knew Alice? Had Alice introduced Bertha to Frederick?

It’s even weirder than that.

I started digging around to find out when Bertha and Sampson’s marriage had ended, and I located a passport application for Bertha Wayne in 1921 when she was still married to Sampson Wayne. 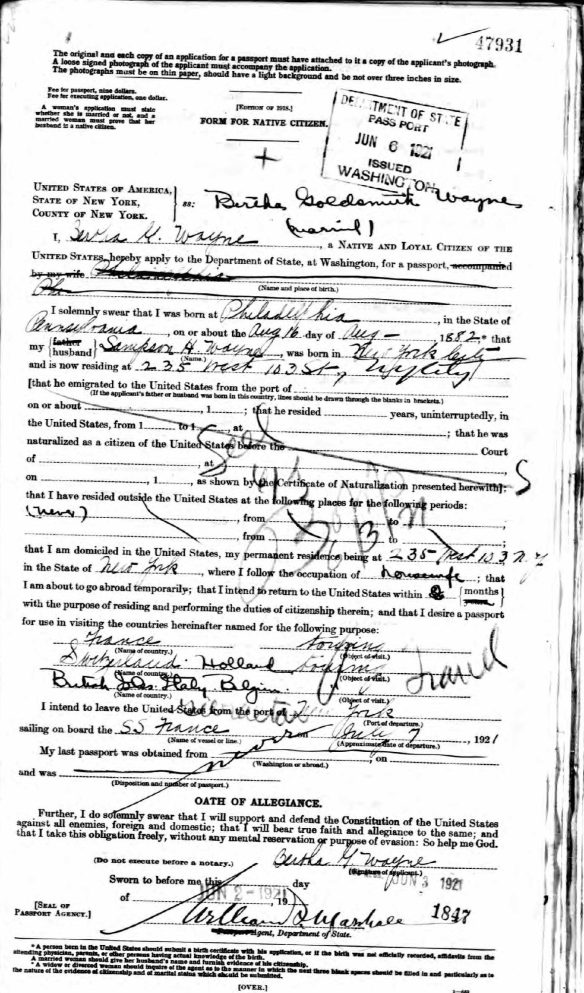 Then I saw a notice of Bertha and Sampson’s divorce decree in the Reno Evening Gazette of July 11, 1922. That meant Bertha married Frederick in May, 1923, less than a year after she divorced Sampson.

I was taken aback when I realized that the second affidavit was a “Form of Affidavit for a Relative.” A relative?

The second affidavit signed by Frederick Newman stated that he was a cousin of Sampson Wayne, Bertha’s husband, and that “my mother was his mother’s sister.”

I went back to research Sampson and Frederick and discovered that Sampson’s mother Hattie Loewenthal was indeed the sister of Pauline Loewenthal, Frederick Newman’s mother.4

So Frederick Newman was Sampson Wayne’s first cousin, and he married Bertha less than a year after she divorced his cousin Sampson. I can only imagine what this did to the families of Frederick and Sampson.

A year after Bertha’s second marriage, her sister Alice Goldsmith married for the first time. She married Louis Margulies, who was born on December 29, 1881, in Iasi, Romania.4 Louis, the son of Sol and Pearl Margulies, had immigrated to the US with his parents on October 10, 1884, where they settled in New York City.5 In 1920, Louis was living with his siblings in New York City and working as a woolens salesman.6

Bertha and her second husband Frederick also appeared on the 1925 New York State census. They were living at 309 West 99th Street, not too far from Alice. Bertha’s two teenaged children from her first marriage, Arthur and Frances, were living with them. Frederick was practicing medicine.8

Louis Goldsmith, who like his sister Alice had not appeared on a census since 1900, also does not appear on the 1925 New York census, but he seemed to be traveling very often, so that may explain his continuing ability to elude the census enumerator. But the census enumerator finally caught up with him in 1930 when he was living in the Plaza Hotel in New York City and working as an advertising executive.9 Louis was obviously quite successful in his career, living in a hotel and traveling very often. He was apparently known in the advertising field as a leader who “helped convert men to wear light summer clothing” and for promoting something called Palm Beach cloth,10 a “lightweight summer fabric of cotton warp and mohair filling.”

Alice and her husband Louis Margulies also appear on the 1930 US census; they were living at 300 Riverside Drive in 1930, and Louis continued to work in the real estate business.11

Although both Louis Goldsmith and Alice Goldsmith appeared on the 1930 census, this time their sister Bertha seems to have missed being counted. However, I did find Bertha and Frederick on a ship manifest for a trip from Southampton, England, to New York on October 11, 1930, which gave their address as 171 West 71st Street in New York City. (Reverse-searching did not find them at that address on the 1930 census.)12

Miraculously, all three Goldsmith siblings are recorded on the 1940 census. Bertha and Frederick Newman were now living on 57 East 88th Street in New York, and Frederick continued to practice medicine. Bertha’s two children had both married and moved on to their own households.13 Alice and Louis Margulies were living at 104 Park Avenue in New York; Louis was still engaged in the real estate business.14 And Louis Goldsmith, the youngest child of Abraham Goldsmith, was living at 21 West 58th Street, still working in the advertising field.15

Louis was the first of the three youngest siblings to die, and he passed away on July 28, 1958, just ten months after his older brother Milton; he was 75 years old. According to his obituary he died from a heart attack in front of his home at 21 West 58th Street.16

Louis Goldsmith’s death must have been particularly heartbreaking for his sister Alice, who had lost her husband Louis Margulies just three weeks earlier on July 8, 1958.17 Alice herself survived her brother and husband by less than seven months; she died on January 6, 1959. She was 78 years old.18

Neither Louis Goldsmith nor Alice Goldsmith had had children; they were survived by only their two remaining siblings, their sisters Bertha and Estelle. Bertha died on May 25, 1963, when she was 84. I could not find any information about when her husband Frederick Newman died, but since her death notice referred to him as “the late Dr. Frederick J. Newman,” he must have predeceased her.

When Bertha died, the only child of Abraham Goldsmith still living was his daughter Estelle from his first marriage, and as we saw, she died five years after Bertha on May 9, 1968, at age 98.

Thus ends the story of my three-times great-uncle Abraham Goldsmith and his ten children. What an incredibly interesting bunch they have been to research. Abraham came as a teenager to Philadelphia from Oberlistingen, Germany, became a successful businessman, lost one wife at a very young age and one daughter as a child, but raised nine other children, five from his first wife Cecelia and four with his second wife Frances. All nine lived interesting lives, some in Philadelphia, some in New York City. Some were talented with words, others with business, others with inventions. It was truly a pleasure to learn about them and to honor their memories.

Now I will move on to the next Goldschmidt sibling to come to America, Meyer.