The three youngest children of my three-times great-uncle Abraham Goldsmith and his second wife Frances Spanier were Bertha, Alice, and Louis. I was going to write a separate post for each of them, but as their stories started to unfold, I realized that their lives were so intertwined that it made more sense to combine their three stories into two posts.  These three siblings were all close in age, and all three ended up in New York City, as had their oldest (half) brother Milton and older (full) brother Alfred.

Bertha was born on August 16, 1878,1 Alice on August 29, 1880,2 and Louis on November 4, 1882, all in Philadelphia.3 In 1900, they were all still living with their parents and older half-sister Estelle in Philadelphia.  Bertha was working as a “saleslady,” Alice as a milliner, and Louis was still in school. Their father Abraham died two years later on January 27, 1902, as we have seen. 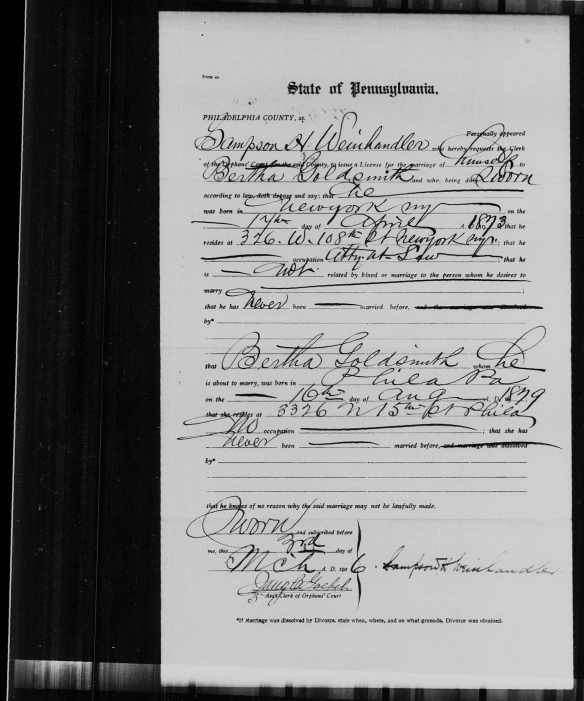 Sampson was born in New York on April 17, 1873,5 and grew up in New York City where his father, a Russian born immigrant, was the owner of a millinery store. Sampson’s mother Hattie was an immigrant from Germany.6  In 1905, Sampson was boarding in the household of others and was a practicing lawyer. He had graduated from City College of New York in 1893 and had received a law degree from Columbia University in 1896.7 A year after marrying Sampson, Bertha gave birth to their first child, Arthur, on May 22, 1907.8

Alfred, Bertha, Alice, and Louis Goldsmith lost their mother Frances the following year. She died on January 18, 1908, from a cerebral hemorrhage and apoplexy, i.e., a stroke.  She was only 52 years old.

The 1910 census found Bertha and Sampson Weinhandler living at 531 West 112th Street in Manhattan with their son Arthur. Sampson was practicing law.9 On July 3, 1911, Bertha and Sampson’s second child was born; she was named Frances, presumably for Bertha’s recently deceased mother.10

Meanwhile, Bertha’s two younger siblings Alice and Louis were probably still in Philadelphia although I cannot find either Alice or Louis on the 1910 US census.  As we will see, these siblings had a way of eluding the census. There are three men named Louis Goldsmith in the 1911 Philadelphia directory, but I’ve no idea which one is my Louis or if any of them are. 11 According to his obituary, Louis was still in Philadelphia during this time period, working as sales and advertising director for the Snellenburg Clothing Company. 12

In February, 1914, Louis traveled from Naples, Italy, to New York, and listed his address as 1934 Chestnut Street, Philadelphia (an address I could not locate on the 1910 census);13 according to a passport application he filed in 1920, Louis spent several months living in France and Italy in 1913.14  In 1914 he founded his own advertising agency in Philadelphia, L.S. Goldsmith Advertising Agency.15

For Alice, I have no records at all between 1900 and 1914. In August of 1914, she traveled to Europe to join her brother Louis, according to the passenger manifest, so Louis must have returned to Europe, but I cannot find him on a passenger manifest later that year.16 I have no address or occupation for Alice from 1900 until 1918 (see below).

Meanwhile, Bertha, apparently more census-compliant than her younger siblings (perhaps because Sampson was a lawyer), showed up on the 1915 New York State census.  She and her family were now living at 235 West 103rd Street in New York City, and Sampson continued to practice law.17

Louis moved to New York City in 1915, according to his obituary. 18 His draft registration for World War I dated September 12, 1918, states that he was then living at 140 West 69th Street in New York City and working in his own advertising business. He listed his sister Alice Goldsmith as his contact person and gave her address as 2131 Green Street, Philadelphia. I could not find Alice living at that address on the 1910 census, but her sister Emily and her family were living there, so perhaps Alice had moved in at some point after 1910. But by 1920, neither Alice nor Emily’s family (Emily having passed away in 1917) was living at that address. 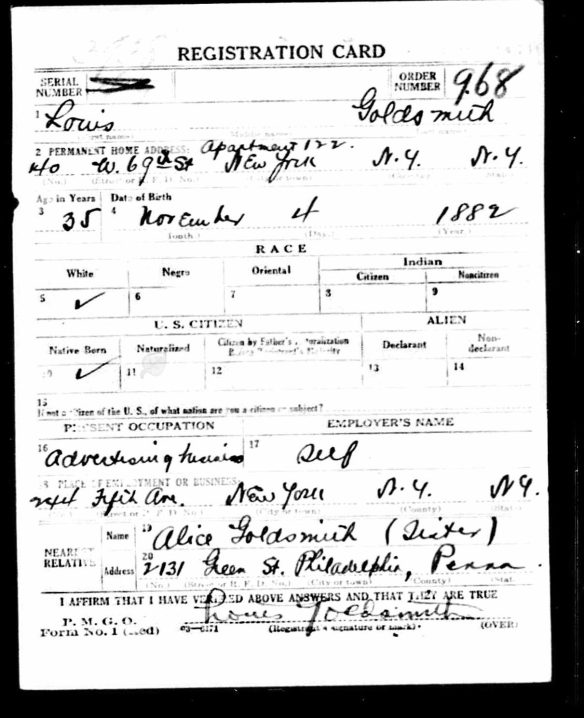 By 1920, Bertha’s husband Sampson Weinhandler had changed his name to Sampson Wayne, presumably to make it look either less Jewish or less German or perhaps both. In 1920 he and his family (also using the surname Wayne) were living at 235 West 103rd in Manhattan, and he was still practicing law.19

Once again, I had trouble finding either Alice or Louis on the 1920 census. But both applied for passports that year, and both listed their residential address as 140 West 69th Street, New York, New York, on their applications, which was the same address that Louis had listed as his address on his 1918 draft registration.20 (See Louis’ application above.) Alice was a witness for Louis on his application as to his birth (giving her address as 140 West 69th Street), and Bertha was a witness for Alice on her application as to her birth.

Both Alice and Louis also applied for passports again in 1923. Again, both gave 140 West 69th Street as their residential address. Both indicated that they were planning to visit several countries in Europe, staying for many months.21

Those passport applications thus did not help me find Alice or Louis on the 1920 census. But they did help me figure out something else. That is a story for my next post.

23 thoughts on “Bertha, Alice and Louis: Eluding the Census”