Hello, everyone! I have returned from my break and am ready to dive back into my exploration of my Goldschmidt/Goldsmith relatives. But before I do, I want to share my second experience working with “Sherlock Cohn, the Photo Genealogist” aka Ava Cohn.

This is one of those photographs, a photograph that belonged to my late cousin Marjorie Cohen, my father’s first cousin, the daughter of Stanley Cohen, my grandfather’s brother. The only person I was fairly confident I could identify in the photograph was Marjorie’s father Stanley, the man on the far left in the photograph. 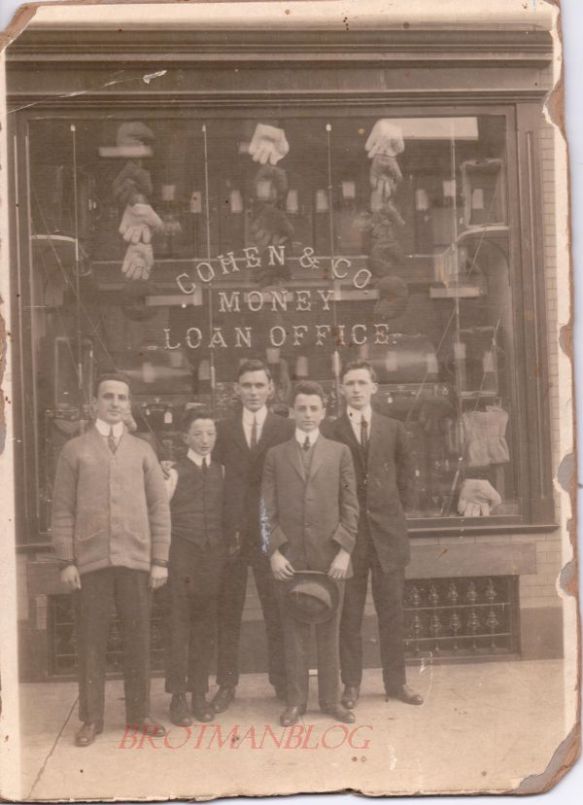 Here is a photograph on Stanley taken just a few years later when he was serving in World War I. You can see the resemblance to the man on the left. The group photograph was taken in Philadelphia in front of the Cohen & Company Money Loan store, which was part of the pawnshop business started by my great-great-grandfather Jacob Cohen in Philadelphia in the 1850s and then carried on by many of his sons, including my great-grandfather Emanuel Cohen, who ran this particular store. I wondered whether these five men were also grandsons of Jacob Cohen. I was particularly curious about whether my grandfather John Cohen was one of the men standing in front of the store.

When I connected this summer with my second cousin Marcy, the granddaughter of my grandfather’s other brother, Maurice Cohen, she sent me some photographs of Maurice and of Maurice’s sons, Buddy and Maurice, Jr.

I also had photographs of my great-grandfather Emanuel Cohen, my great-uncle Stanley, and my grandfather John. Having had fabulous success with Ava Cohn, aka Sherlock Cohn, the Photo Genealogist, in the past, I decided to have Ava analyze these photographs to see if she could identify the people in the Cohen & Company photograph.

Ava’s work is remarkable. Her attention to detail and the research she did to try and answer my questions is incredibly professional and thorough. Although she could not definitively identify all the people in the photograph, she certainly narrowed down the possibilities and made some very helpful and persuasive comments and suggestions. With her permission, I am going to summarize and excerpt from her report.

First, Ava analyzed whether the date that I’d been told was on the back of the photograph—April 1913—was accurate.  She based her analysis in part on the type and content of the photograph:

Ava then analyzed the clothing worn by the people in the photograph, labeling them A through E from left to right:

From these observations, Ava concluded that the date of April 1913 on the photograph was likely accurate.

Then using that date and her estimation of the age of the five individuals in the photograph, Ava deduced the likely birth year of each of the five:

As noted above, I was already reasonably certain based on other photographs that Person A was my great-uncle Stanley Cohen, Marjorie’s father, who was in fact born in 1889. Ava’s analysis further confirmed that conclusion by relying on the physical descriptions of Stanley in his draft registrations for World War I and World War II. The World War II registration indicated that Stanley was 5’9” tall, and from that fact Ava was able to compare him to the other men in the photograph to reach some conclusions about their heights.

Using this information as well as information from draft registrations, census records, directories, and other sources, Ava reached the following hypotheses about the other four people in the photograph:

For person B, Ava noted that Simon LB Cohen was the only grandson of my great-great-grandfather Jacob Cohen who would have been that young (roughly 15) in 1913. I would love for that to be Simon because I know so much about what happened to him just a few years after this photograph was taken. Simon served valiantly in World War I, was seriously injured and presumed (mistakenly) killed in action, and was awarded the Croix de Guerre for his bravery. He died as a young man in 1934, perhaps as a consequence of his time in the war.

But we can’t be sure that this boy was even related to the Cohens (or that anyone in the photograph other than Stanley was). Perhaps they are just a bunch of friends. But if we assume that they are all Cohens and all grandsons of Jacob Cohen, then Simon LB Cohen is a likely candidate to be person B. Since there are no draft registration descriptions of Simon nor any photographs, it is impossible to know for sure whether this is Simon in the photograph.

I was also very intrigued by Ava’s hypothesis that persons C and E  could be the twin brothers, Morris and Samuel Cohen, sons of my great-grandfather’s older brother Joseph Cohen and grandsons of my great-great-grandfather Jacob Cohen. Morris and Samuel were born on August 22, 1887, in Cape May, New Jersey, but in 1910 they were living with their parents in Philadelphia, both working as salesmen in a department store, according to the 1910 census. Ava thought that although they were not identical, they did look like brothers and appeared to be about the same age—24 to 26 years old. 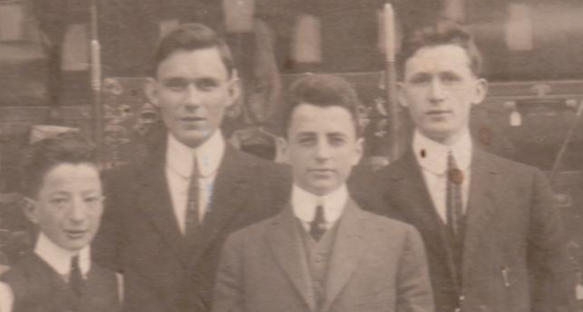 Ava’s analysis seemed very convincing, so I was motivated to search for descendants of Morris Cohen and Samuel Cohen to see if they had any photographs of the twin brothers. With the help of a good friend who knew one of Samuel’s grandchildren, I was able to make a connection. Unfortunately the grandchildren’s memory and photographs of their grandfather Samuel (displayed below) did not confirm that he was either Person C nor Person E in the photograph so I am back to square one in identifying those two men.

Samuel Cohen. Courtesy of his grandchildren

Samuel Cohen, courtesy of his grandchildren

But it was Person D I was most interested in, as I hoped he was my grandfather John Cohen, who would have been almost seventeen and a half in April 1913 and thus close to the age of Ava’s estimated age of Person D. Also, Ava pointed out that on his 1921 passport application, my grandfather’s height was reported to be 5’6” and that his World War I draft registration described him as short; certainly Person D is a shorter man than Persons A, C and E. Those two factors pointed to Person D being my grandfather. 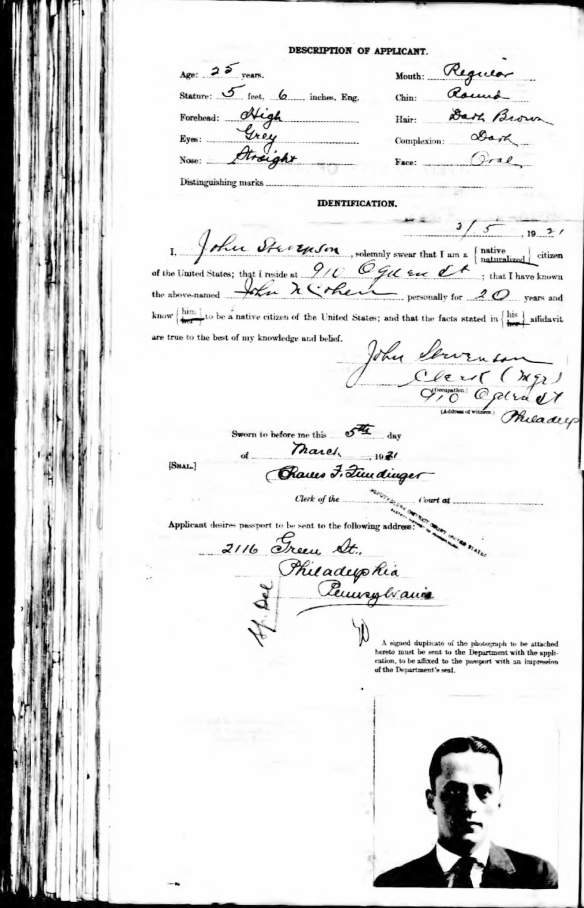 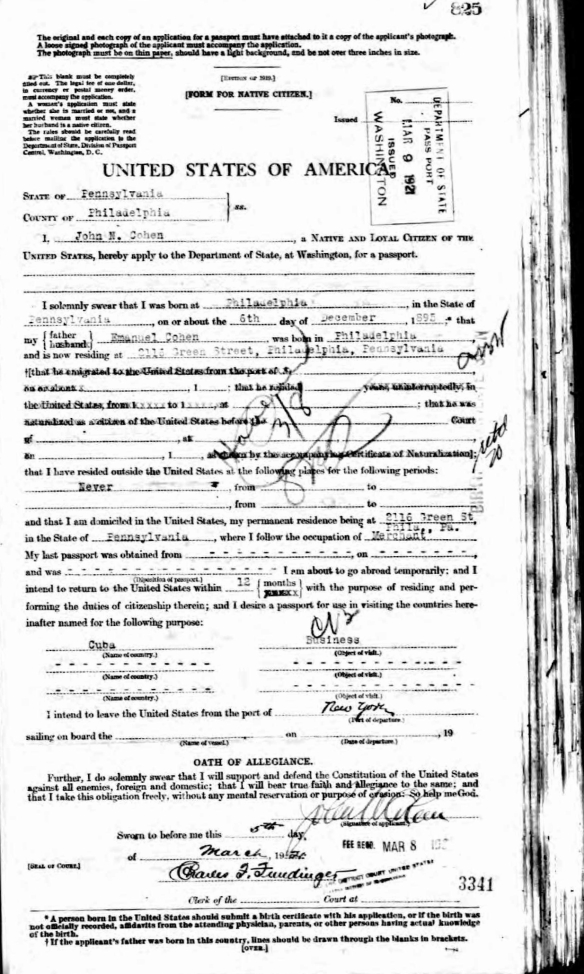 Here is a closeup of Person D and then several of my grandfather—in 1921,1923 and 1930. In addition, Ava believes (and I agree) that the man holding a baby in the fifth photograph is probably my grandfather.  I know we see what we want to see, but the more I study these, the more I think Person D might be my grandfather. The loss of the widow’s peak could be from his obviously receding hairline. Look at the difference between 1921 and 1923. In 1930 he is wearing a hat—perhaps to hide his balding?

One other thing I noticed in the photographs of my grandfather—he had attached earlobes. Unfortunately when I zoom into the Cohen & Company photo, it’s hard to tell whether Person D also has attached earlobes.

Could this be my grandfather John Cohen? And who is the baby?

I now believe that Person D is my grandfather, but I know that that’s what I am hoping for so I don’t trust my judgement. Ava was not certain, but thought it was possible.

What do you think?

Although it was not possible for Ava to identify all of the people in the group photograph, she certainly narrowed the field and provided solid and convincing reasons for her conclusions. Thank you, Ava, for a wonderful job on this extremely difficult project!

40 thoughts on “Cohen and Company Photograph: Is That My Grandfather?”