Next in my series of updates from my cousins are a number of research discoveries made by my cousin Wolfgang Seligmann, the first of my cousins who found me through my blog. That was over four years ago, and together Wolfgang, his mother Annlis, and I were able to reconstruct major parts of the Seligmann family tree going back as far as my fifth-great-grandfather Seligmann ben Hirsch, the father of Jacob Seligmann, my fourth-great-grandfather, who was born in 1773 and gave the family Seligmann as its surname.

Some of you may remember the “magic suitcase” that Wolfgang and his mother had, filled with letters and papers about the Seligmann family. When I visited Wolfgang and Annlis in Mainz in 2017, I saw this wonderful suitcase. There were still many, many papers yet to be read and digested, and still much work to be done to uncover the rest of the story of the Seligmann family in Germany. So while I have gone on to other family lines, Wolfgang has continued to dig into our Seligmann family history and share his discoveries with me. Although I have updated my tree with this information, I haven’t updated the blog in quite a while. I want to take some time now to do that and share the other information that Wolfgang has uncovered.

First, Wolfgang found several directories that included listings for various members of the Seligmann family, including this 1845 directory from the city of Mainz where a number of our Seligmann relatives resided. On this page Salomon Seligmann is listed as a Handelsmann or merchant. 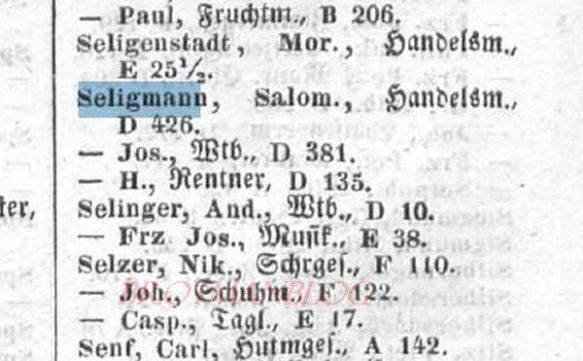 The second directory listing Wolfgang shared was also from Mainz, this one dated 1868. It lists as a “Banquier” our cousin Siegfried Seligmann. More specifically, Siegfried is described as a Prokurist or authorized officer of the bank. This is consistent with the description of him in Mathilde Mayer’s book, Die Alte und Die Neu Welt.  [The Old and The New World] (1951). Siegfried Seligmann was the son of Martha Seligmann, who was the sister of Moritz Seligmann and thus my four-times great-aunt. Martha Seligmann had married her own first cousin, Benjamin Seligmann, son of Hirsh Seligmann, Jacob Seligmann’s brother. So Siegfried was his own second cousin. He was born in Bingen on June 18, 1824.4

To make matters even more convoluted, Siegfried married his first cousin, Carolina Seligmann, daughter of Moritz Seligmann and my three-times great-aunt. Carolina was born in Gau-Algesheim on March 18, 1833,5 and she was the half-sister of my great-great-grandfather Bernard Seligman, the one who traveled the Santa Fe trail and became a successful business leader and political leader in Santa Fe. As I’ve already written, Caroline and Siegfried had seven children, only one of whom lived long enough to survive the Holocaust. 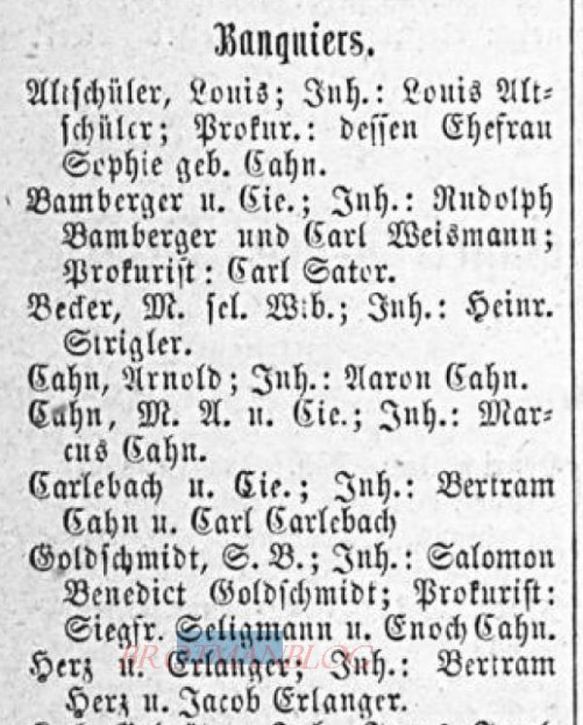 The third directory Wolfgang shared with me is dated 1906 and is a listing from the Hessen-Rheinhessen directory for Bingen that includes a number of our relatives. One is Ferdinand Seligmann. Ferdinand was the son of Martha Seligmann and Benjamin Seligmann and was thus the first cousin of my great-great-grandfather Bernard Seligmann. His niece Martha Mayer wrote about him in her book Die Alte und Die Neu Welt, describing him as “Onkel Hut” or Uncle Hat because he was known for wearing a distinctive hat. He was a successful businessman in Bingen, born on April 23, 1836, and died in Bingen on November 21, 1906.6 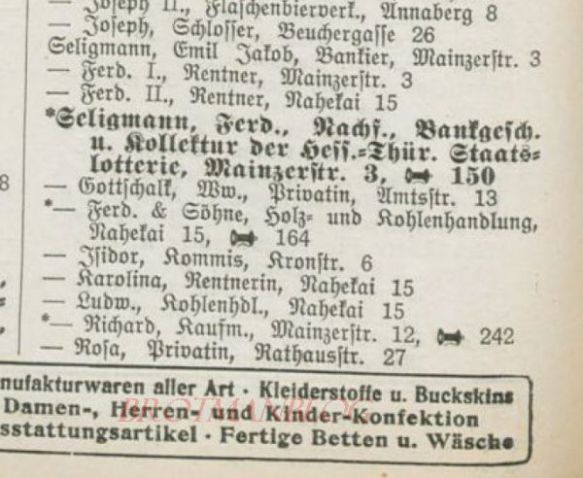 Also listed is Emil Jacob Seligmann, son of Siegfried and Carolina Seligmann. He was born in Mainz on December 23, 1863, and married Anna Maria Angelika Illien, according to his death record.7 They had two children, Emil and Christine. Emil Jacob Seligmann was perhaps the first Seligmann family historian; it was his family tree that helped Wolfgang, Annlis, and me unlock many of the mysteries in the Seligmann family. Emil died from arteriosclerosis on August 9, 1942, in Wiesbaden.8

There are two men listed here who may be our relatives, but since both died before the 1906 directory was issued, I am not sure. Ludwig Seligmann and Richard Seligmann were the sons of Isaac Seligmann, brother of Moritz Seligmann, and Rosine Blad. Ludwig was born in Bingen on December 6, 1827, and died there on May 9, 1887, long before this directory was published. He was married to Auguste Gumbel, and they had five children. Since Auguste was still living in 1906, perhaps she had left this listing under her husband’s name. She died in 1910. Ludwig is listed here as a coal merchant (Holhenhandler).

Living at the same address as “Ludwig Seligmann” were at least two other Seligmanns: Karolina, a pensioner, and Ferdinand, another pensioner, and then a third Ferdinand in the wood and coal business with his son (this couldn’t be Uncle Hat as he never married or had children). I do not know who these people were, so perhaps this Ludwig and these other Seligmanns were not our relatives at all.

According to Emil Seligmann’s family tree, Richard Seligmann was born in Bingen on November 4, 1831, and died there on January 17, 1906. He must have died after the 1906 directory went to print. He is listed there as a merchant. He was married to Jeanette Gumbel. I’ve not been able to determine whether Auguste Gumbel and Jeanette Gumbel were related. Emil reported that Richard and Jeanette had three children, Wilhelmina (born 1864), Florentine (1866), and Heinrich (1870). I have not found much about any of them. Looking at these names on my tree has reminded me how much more work I still have to do on the Seligmann family.

The last directory listing that Wolfgang sent to me, also dated 1906 and from Hessen-Rheinhessen, must be the most precious to him as it includes his great-grandfather August Seligmann, brother of my great-great-grandfather Bernard, and their younger brother Jacob, later known as James when he immigrated to England (more on James to come). August is listed as an iron merchant, and Jacob is listed as a wine merchant.

August was born on December 10, 1841,9 and died in Gau-Algesheim on May 14, 1909.10 He was married to Rosa Bergmann, and they had four children, including Wolfgang’s grandfather Julius, who was born in 1877 and died in 1967. (More on Julius to come as well.) I have written about August and Rosa and their children previously; two were killed during the Holocaust, Moritz and Anna. Their oldest child, Franziska, married Adolf Michel, and had one child Fred Michel, about whom I’ve written and about whom I have more to report. Franziska died in 1933.11 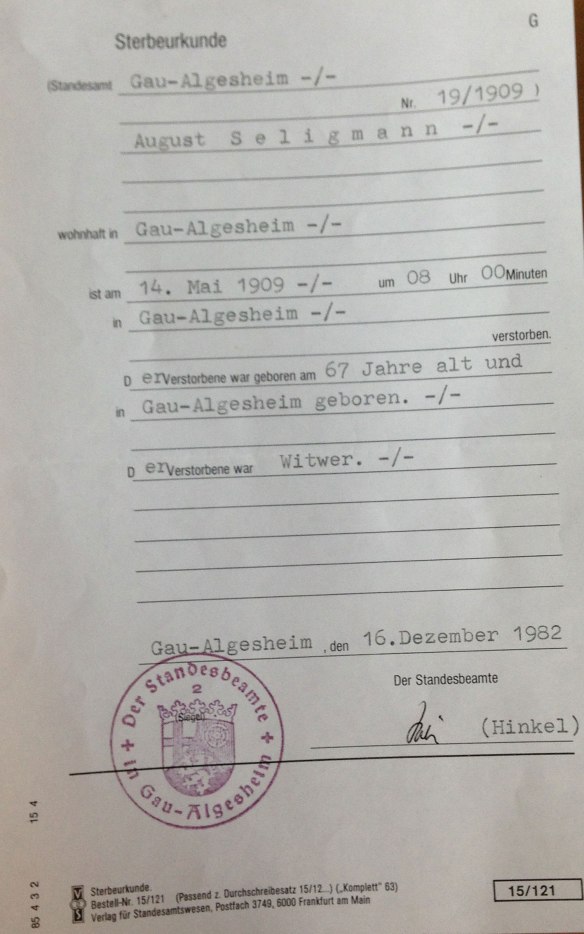 Thus, as you can see, the story of the Seligmanns is not yet finished. Some of what I have is based on an unsourced family tree that I since learned has numerous errors. I need to go back and verify all that information if I can.

And that’s an important lesson for all of us involved in family history. The stories are never finished, the work is never done. Thank you, Wolfgang, once again, for all your generosity and hard work and for keeping me on task! There are more Seligmann updates to come.

16 thoughts on “Seligmann updates: The work is never done”