Before turning to the fourth child of Meyer Goldschmidt and Lea Katzenstein, a quick update from my cousin-by-marriage Ralph Dannheisser, the stepson of my cousin Elizabeth Stern and grandson of Johanna Bloch Dannheisser, the sister of Charles Bloch, who was married to my cousin Amalie Meyer Bloch.

Ralph sent me this photograph of his grandparents, Ludwig and Johanna Bloch Dannheisser, himself as an adorable toddler, and, in the center wearing the lovely hat, his grandmother’s sister-in-law Amalie Meyer Bloch.

According to the inscription on the back, it was taken in May, 1939, in The Hague in the Netherlands, when Ralph was a year old. Ralph’s grandparents and his parents had already escaped from Germany to the Netherlands by that time, and Ralph and his parents would leave for the US early in 1940. Tragically, his grandparents did not leave Europe and were sent to the concentration camps where they were murdered in 1944.

This is the first photograph I’ve seen of my cousin Amalie, and it raises more questions that I cannot answer. Why was she in the Netherlands in May, 1939? Had she left Germany for good by that point? Her naturalization papers say that when she came to the US in August 1941, her last residence was in Lisbon, but the ship manifest for her arrival in the US stated that her last permanent residence was Frankfurt, Germany. Neither mentions the Netherlands.

Was her husband Charles with her in the Netherlands in May 1939? He probably had already immigrated to France by then, so perhaps he and Amalie met in the Netherlands as a neutral meeting place? Perhaps Charles took this photograph? Or maybe Charles wasn’t there at all.

We don’t know the answers to any of these questions. But Ralph is certain that the woman standing in the center of this photograph with the big smile was Amalie Meyer Bloch, my third cousin, twice removed, and his great-uncle’s wife.

What amazes me is how happy Ralph, Johanna, and Amalie look. They’d left Germany, faced terrible acts of anti-Semitism, but were still finding something to smile about. Quite remarkable. Another sign of the resilience of human beings and our desire for love over hate.

Although I ran into a brick wall trying to learn more about the time Charles Bloch spent in France during World War II, in the course of that research I discovered another twist in the Goldschmidt family tree.

First, I learned that Charles Bloch had a sister. Julius Bloch and Clara Herzberg, parents of Charles Bloch, had a daughter named Johanna Bloch born in 1879.

Here is a beautiful photograph of Johanna taken in 1921 in Frankfurt when she was 42:

Tragically, both Johanna and Ludwig were killed at Auschwitz on May 22, 1944, after being deported from the Netherlands.1

But their son Paul Dannheisser escaped from Germany to the Netherlands in 1938 and then to the US in 1940, settling in New York with his wife Dora Anni (known as Anni) nee Rosenthal and their son Ralph.2

This is a photograph taken at Paul and Anni’s wedding in October, 1932.

When I saw the name Dannheisser, I knew something was familiar about it. Elizabeth Stern, the daughter of Alice Rapp and Saly Stern, was known as Elizabeth Dannheisser near the end of her life, according to the Social Security Claims and Applications Index.3 I had not found a marriage record for Elizabeth showing a marriage to someone named Dannheisser, only records showing a Paul Dannheisser married to Anni, but when I saw that Charles Bloch had a brother-in-law Ludwig and a nephew Paul with that surname, I wondered if there was a connection.

Fortunately, I was able to find and connect with Paul Dannheisser’s son Ralph, and he confirmed that in 1973, his father Paul Dannheisser had married my cousin Elizabeth Stern, the daughter of Saly Stern and Alice Rapp. He even shared a copy of the marriage certificate I couldn’t locate. 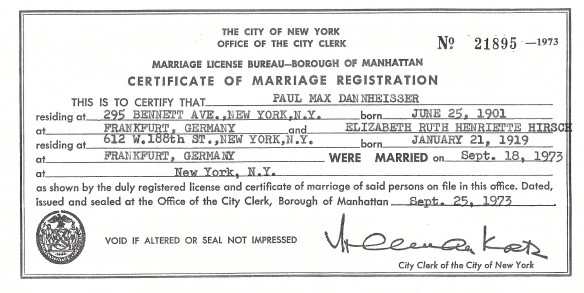 Paul was 72 at the time, and Elizabeth was 54. Paul was a widower, his wife Anni having died the year before, and Elizabeth had divorced her first husband Gerhard Hirsch in 1950.4  Paul and Elizabeth had been introduced to each other by Ilse Bloch, known in the US as Helen Bloch, the daughter of Amalie Meyer and Charles Bloch.

Helen was Elizabeth’s second cousin; they were both great-granddaughters of Jacob Meier Goldschmidt and Jettchen Cahn:

Helen Bloch was also Paul Dannheisser’s first cousin; they were both the grandchildren of Julius Bloch and Clara Herzberg: 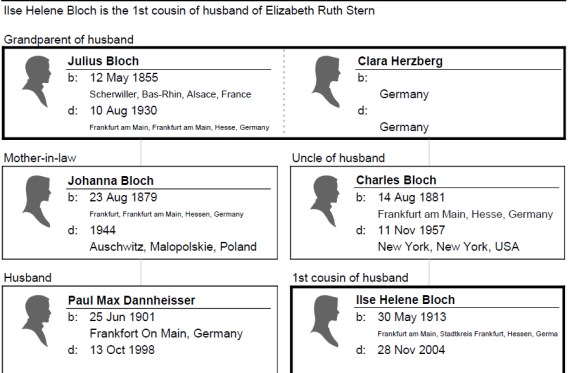 So Elizabeth Stern, the granddaughter of Helmina Goldschmidt Rapp, married the nephew of Charles Bloch, who was the husband of Amalie Meyer, daughter of Regina Goldschmidt and Aaron Meyer. Regina was Helmina’s older sister. Here’s another chart to show the connection.

Ralph, Paul Dannheisser’s son and the great-nephew of Charles Bloch, was thus the stepson of my cousin Elizabeth (known as Elsbeth). He also knew Charles and Amalie (whom he called Ama) Bloch. He often visited them in their New York City apartment on West 56th Street. He and his parents would go for monthly Sunday dinners. Ralph would listen to the radio or be entertained by Charles and Amalie’s daughter Helen while his parents and Charles and Amalie played bridge. Helen, who was an avid photographer, would show Ralph her photography magazines.

Ralph described Charles as a heavy-set bald man and Amalie as a handsome woman who wore her hair in a bun, and he said they were both very kind to him, as was Helen. In fact, he stayed close to Helen for many years, bringing his own children to visit her often. Unfortunately, however, Ralph was not able to tell me any more details of how Charles Bloch spent the years he was in France.5

Ralph shared the certificates of naturalization issued to Alice, Saly, and Elizabeth Stern; these were particularly exciting to me because they included photographs of each of them. He also shared a collage of photos including one of Walter Stern, Elizabeth’s brother. 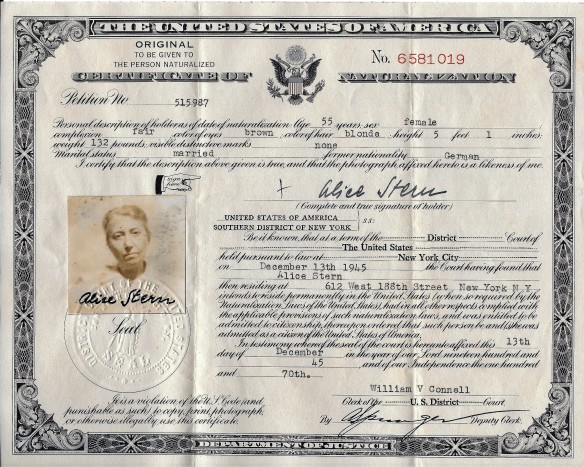 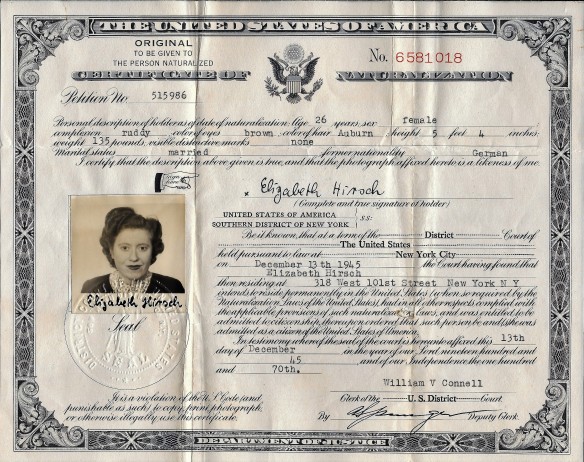 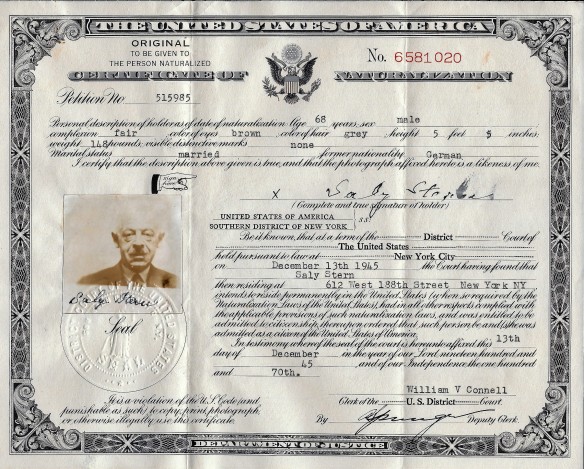 Ralph was very fond of Elizabeth Stern, his father’s second wife. He described her as a lovely woman who was very warm and wonderful to him and to his father. Ralph was very pleased when his father married her (he was already an adult by that time). Sadly, Elizabeth developed a terrible illness not long after she married Paul Dannheisser and spent many of the years at the end of her life in a nursing home, dying in February 1997.6

Her brother Walter Stern also endured difficult times. Ralph had a file filled with letters written to or about Walter that revealed much about his character and his work history and ethic. In Germany, Walter was a very well-regarded employee of a book dealer named J. Kauffmann before he immigrated to the US, and then for some time after he immigrated, he worked for a jewelry company in Washington, DC, where he was living when his parents and sister Elizabeth immigrated to the US. His employer at the jewelry company had written a letter in April 1939 to the American Consul in London (where his family was then living), extolling Walter’s virtues. My hunch is that this was a character reference to support the Consul’s issuance of a visa to Saly, Alice, and Elizabeth Stern so they could immigrate to the US.7

Walter returned to New York after his family arrived in March 1940 and worked for a company called Tonerde Incorporated, as listed on his World War II draft registration in October 1940. He left there on December 8, 1941, and received another positive letter of recommendation. But that draft registration hinted that something else was going on with Walter: 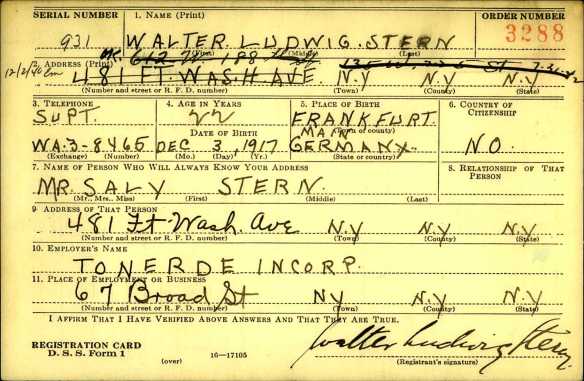 Why was he “under care”? Family lore, according to Ralph, is that Walter was mugged and suffered a brain injury from which he never recovered. But as late as 1944, Walter received letters of thanks from the Treasury Department for his efforts in selling war bonds. 8

Ralph and I couldn’t put together the whole picture of what happened to Walter. In a December 1946 letter from the Immigration and Naturalization Service to Alice Rapp Stern, Walter’s mother, there is a reference to a warrant for Walter’s arrest that was being cancelled. My hunch is that once Walter’s declaration of intention to become a US citizen had expired after seven years, or in August, 1945, and he had not yet become a naturalized citizen, he was subject to deportation. How Alice Rapp Stern persuaded INS to close the case and cancel the arrest warrant is a mystery yet to be solved. I have filed a request for documents from the USCIS to see if I can learn more. 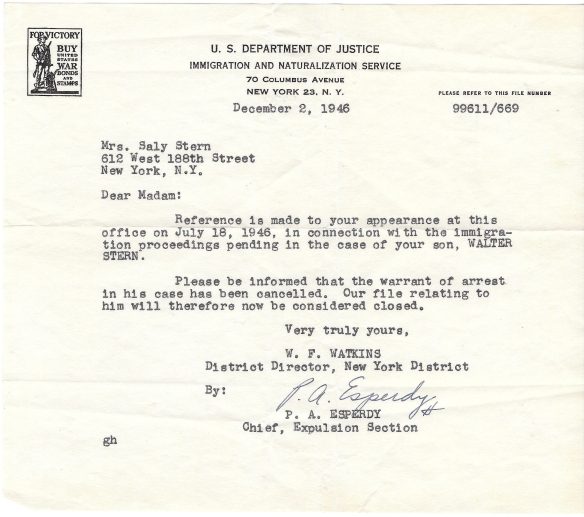 What we do know is that by the end of 1947, Walter was institutionalized at the Rockland State Hospital and later at Brooklyn State Hospital, where he lived out the rest of his life, dying in October 1996, just a few months before his sister Elizabeth.9

I still have no details about how Charles Bloch survived the war in France, the original question that led me down this ambling path. But what an adventure the search for answers to that question has been: learning about the ITS document request process, thanks to Barbara; making the connection to Danny, who spent so much time helping me find French records; and then finding Ralph, my distant cousin by marriage, who brought to life some of the people I’d been researching.  All these connections and discoveries have made this a wonderful experience. I may not have all the answers, but sometimes it’s more about the journey than the destination.