Of all my family lines, I have had the best luck with my Seligmann line. First, early on I found my cousin Pete, Arthur Seligman’s grandson, who had a wealth of information about the New Mexico Seligmans.  Then I was lucky to find people in Germany who provided me with the copies of vital records for Moritz Seligmann and his family as well as a book about the Jews of Gau-Algesheim.  From those sources, I learned the names of many of my German ancestors.

Then my cousin Wolfgang found my blog, and he has provided me with invaluable information and documents as well as his continuing help in deciphering and translating what he found in his cousin’s suitcase.  From there I was able to find my cousin Suzanne, who has provided me not only with more information and more documents but also with priceless photographs of many of my Seligmann relatives.

Right before I left and then while I was away, Wolfgang and Suzanne sent a bunch of new documents and new photographs that I want to share.  I am not even sure where to begin.  I think I will start with the newly discovered Westminster Bank document revealing the names of all the children of Hieronymous Seligmann; it answered some of the questions left open by my posts about the list of heirs to the estate of English James Seligman.

This must have been the family tree that Elsa Oppenheimer had found erroneous as described in her letter of July 9, 1984.  She had asserted that Hieronymous did not have a daughter named Johanna or Elizabeth (Bettina, on the tree), as the Bank’s tree indicated.  But Elsa also said that Moritz did not have a son named Adolph, and she was wrong about that.  I now think she was also wrong about Johanna and Bettina.  How do I know she was wrong?  Because there are pictures of both of these women in the photograph album that belonged to their cousin, Fred Michel.

First, here is a picture of Johanna Seligmann Bielefeld from the Michel album.  Despite Elsa’s protestations, Johanna was clearly the daughter of one of the Seligmann sons, and there is no reason to think that she was not a sibling of Jack, Rosina Laura, and Mathilde, as indicated on the Bank tree, and thus a daughter of Hieronymous.

As I posted earlier, Johanna married Alfred Bielefeld, and they had two children, Hans and Lily, both of whom immigrated to the United States.  Alfred and Johanna were both deported to Terezin, where Alfred died.  With the help of the archivist at Terezin, I was able to locate Alfred’s death certificate.

From what I can interpret here, Alfred died from myocardial deterioration and cellulitis.  Johanna did not die at Terezin, but was later transported to Auschwitz, where she was killed.

As for Bettina, this beautiful photograph appears in the Michel photo album. 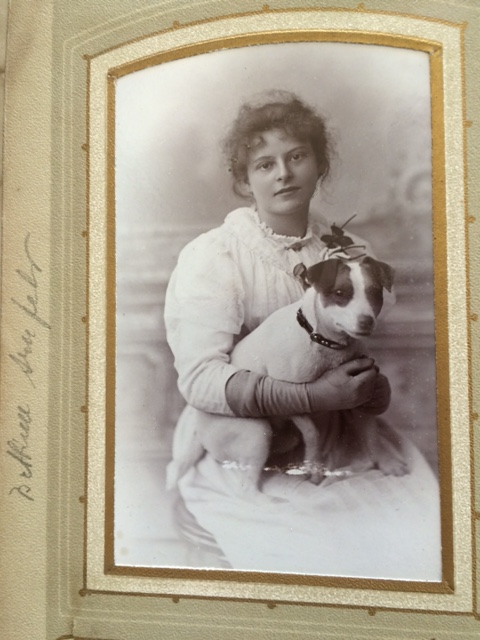 Wolfgang located a page in German for the stolperstein placed in her memory in Muelheim-Ruhr.

According to this page, Bettina was born in Gau-Algesheim on March 17, 1875, the daughter of Hieronymous Seligmann and Anna Levi.  She attended school in Bingen and married Adolf Arnfeld in 1900.  Adolf was in the fabric and clothing business in Mulheim-Ruhr, and he and Bettina were living there when their son Heinz was born in 1902.  Adolf died in 1927, and Bettina was still living in Mulheim when she was deported to Terezin on July 21, 1942.  She died six months later at Terezin from pneumonia.  Here is yet another chilling death certificate issued by the Nazis.

Bettina’s biography also discussed her son Heinz.  After initially working for his father’s company, Heinz became an attorney and worked as a clerk in the court system until dismissed in 1933 under the anti-Semitic laws adopted by the Nazis.  He was imprisoned for a period of time in 1938 at Dachau (mostly likely in the aftermath of Kristallnacht), but was released.  He immigrated to England in 1939, where he married Liselotte Schondorff in 1945.  Heinz died in England on May 4, 1961.  I have not located any descendants.

Based on the photographs and the other information and documentation, I think it is quite evident that both Johanna and Bettina were the daughters of Hieronymous Seligmann, the younger brother of Bernard Seligman, my three-times great-grandfather.

There were two other names I was not certain about when I wrote about the list of heirs to the estate of English James Seligmann: Anna Wolf and Bettina Ochs.  I think I now have answers for those as well, with the help of Wolfgang and the photographs from Suzanne.

The list of heirs to English James Seligman’s estate had listed Anna Wolf right below Johanna Bielefeld and Bettina Arnfeld and referred to Johanna as her aunt.  It also indicated that Anna had died in December 1935 in Mulheim-Ruhr, the town where Bettina had lived.

On the Hieronymous family tree from the Westminster Bank, depicted above, one of his daughters, Mathilde Wolf, is listed as having a daughter Anna, who died in 1935. This certainly seems to indicate that the Anna Wolf on the list of heirs was the daughter of Mathilde, sister to both Johanna and Bettina.  That assumption is further supported by this photograph of what appears to be a stock certificate with the name Mathilde Wolf geb. (born) Seligmann written upon it.  I don’t know what happened to Mathilde or her husband or why she herself is not listed as an heir instead of her daughter Anna.

As for Bettina Ochs, I had been quite perplexed by her name on the list of James Seligman’s heirs.  As I wrote, she is listed as Frau Bettina Ochs from Milan, Italy.  Ochs thus appeared to be her married name, so I had thought her birth name must have been Seligmann or Oppenheimer, but the list names her brother as Arthur Erlanger, suggesting that Bettina’s birth name was Erlanger.  So who was she, and how was she related to the Seligmanns? 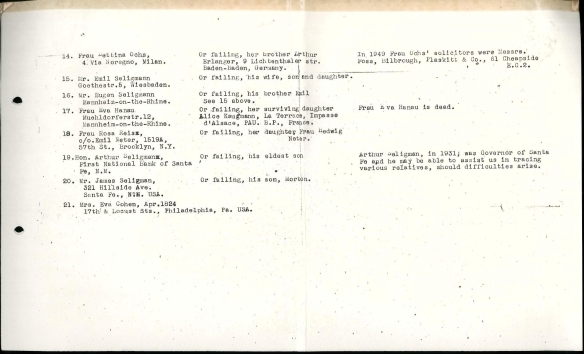 Until I saw this photograph:

Thanks to Wolfgang, I now have an answer.  Wolfgang found a page on Geni.com, another genealogy website, for Mathilde Erlanger nee Seligmann, which identified her as the daughter of Moritz and Babetta Seligmann. I looked back at my notes for the children of Moritz and Babetta, and sure enough there was a daughter named Mathilde for whom I had had no information beyond her birth date of January 31, 1845, which came from the records I’d obtained from Gau-Algesheim.  Now from the Geni page, the list of heirs, and the photograph, I know her married name and the names of her children, Bettina and Arthur, and I know Bettina’s husband’s name, Emil.  Unfortunately, however, I do not know what happened to Mathilde, her husband, Arthur or Bettina and Emil.  I don’t know why Bettina was listed as living in Milan or why she had an English lawyer, according to the list of heirs.  I don’t know why her brother was only listed as a secondary heir.

The only other record I have for Bettina so far is from the JewishGen database labeled “Switzerland, Jewish Arrivals 1938-1945,” which includes a listing for “Bettina Ochs-Erlanger (Bettina Oberdorfer).”  That listing says her nationality was Italian and that she arrived in Switzerland on August 5, 1944.  Where did she go from there?  Why is she also listed as Oberdorfer? What happened to Emil?  I don’t know.

So as always, some questions have been answered, leading to more to be answered.  Next post I will look at some of the other photographs from the album of Fred Michel.