It’s a new year, and it’s time to start the story of a new line in my family. As I was finishing the history of the Katzenstein family, I pondered which line I should work on next. Growing up, I’d only known the surnames of some of my ancestors: Cohen, Seligmann, Nusbaum, Schoenthal, Katzenstein, Brotman,  and Goldschlager, the lines I’ve focused on so far. I did not ever hear the names Jacobs, Schoenfeld, Hamberg, Goldschmidt, Brod, or Rosenzweig. Those names had disappeared when the women took their husbands’ names and gave their children only their husbands’ names. But after researching the husband’s lines, I learned the birth surnames of their wives.

Thanks to the incredible work of David Baron and Roger Cibella, I can trace my Goldschmidt family back to my fifth-great-grandparents, Falcke Jacob, born in about 1697, and his wife Sara (surname unknown), born in about 1704.

My Goldschmidt ancestors came from Oberlistingen in the Hesse region of Germany, just a few miles from the village of Breuna, where my Hamberg ancestors once lived, about fourteen miles from Sielen where my Schoenthal ancestors lived, and about fifty miles north of Jesberg where my Katzenstein relatives lived.  Oberlistingen is in fact a small village within the larger township of Breuna, which also includes Niederlistingen, another small village very close to Oberlistingen. The two villages are sometimes referred together as the two “Listingens.”

Years ago David and Roger put together a website that traced the history of the Goldschmidt family and Oberlistingen and included excerpts from Chapter III of Dieter Carl’s book, Die Juden Geschichte Beider Listingen [The Jewish History of the Two Listingens] (Herausgegeben vom Gemeindevorstand der Gemeinde Breuna, 1999), as translated by Joseph Voss.

According to Dieter Carl, Jews had been expelled from the Hesse region by Duke Phillip the Generous in the mid-16th century in response to pressure from Martin Luther.  Then in 1592 Lord Moritz allowed a few Jews to settle in the region. Eventually more Jews settled in the Hesse region, but restrictions were imposed.

The unique position of the Jews derived from the nature of their religion, on one hand, and, on the other hand, stemmed from the nature of a people who had no citizens rights, who were not fully free, and stood outside of the established Christian society.  Therefore the Jews had gained the special protection of the Feudal lords needed for their security and livelihood for economical activity and housing.  Originally this protection was in the hands of the Kaiser, but in time it transmitted down to local Dukes.  ….  [T]he Dukes of Hessen … gave to certain families a letter “schutzbriefe” of protection–the legal basis for living in these rural areas.  The receiver of the schutzbriefe had to pay a reasonable sum and had to provide other services for the Lord.  The protection letter gave the Jews the legal right to trade and lend money.

For a long time Jews could not become artisans, farmers or civil servants, but only moneylenders or traders.  In order to limit the number of Jews in Hessian towns and villages, the letter could not be inheritable.  In reality though, the letter was passed down from father to eldest son with a small sum paid in order to continue that right.  This was beneficial for the right to do business and who could establish a family; hence the authorities could control the size of the Jewish population.  All the Jews for whatever reason did not possess the Schutzbrief, the youngest sons and unmarried daughters were the so-called “Unvergleitete” or disinherited.  From these large groups were created the Jewish under classes   or “Unterschicht”.  These consisted mainly as the “knechte, or the worker/ servants, the men and women who served the Schutzjuden in their employ.  In part they lived in great poverty and some resorted to begging for their livelihood.

According to Dieter Carl, the first Schutzbrief in Oberlistingen was given in 1724 to someone known as Juden Falcke, as seen in this letter dated October 19, 1724:

I, the undersigned am writing because I am protected by the esteemed sires of Malsburg.  I wish to become a member of the Oberlistingen community with permission to reside there.  I have obtained all of the rights to function in this community as a Jew and who has officially received these rights along with your right to cancel my contract.  Furthermore I am obligated, if the community is in need of money, and if I have the means to provide a loan without interest without damage to myself, I will make an advance to them if the need arises.  All of what is said here and recorded is based on free will and opinion, which my signature authenticates.

Who was Juden Falcke? Was he related to me?

Jacob Falcke Goldschmidt was married three times.  His first wife was named Bela, with whom he had one son; his second wife was Judith Arons, with whom he also had one son. Jacob’s third wife was my four-times great-grandmother, Eva Reuben Seligmann,[1] whom he married on November 24, 1780. [2]

Jacob Falcke Goldschmidt and Eva Reuben Seligmann had four sons:  my three-times great-grandfather Seligmann and his brothers Lehman, Meyer, and Simon. Dieter Carl also listed an unnamed daughter, and David Baron found a reference to this daughter in the Alex Bernstein Collection at the Leo Baeck Institute.  Her name was Jette, and she was born May 4, 1793; she married David Grunewald of Hoexter, Germany—the region that is the focus of Alex Bernstein’s research. According to his research, Jette died on August 4, 1822, and did not have any children.

CORRECTION: David Baron pointed out that I had misread Bernstein’s research. He found that Jette Goldschmidt did have children with David Grunewald before her death. First, a son Jacob Grunewald was born May 5, 1820; a second child was stillborn on July 30, 1822. Jette died five days later, presumably from complications from childbirth. Jacob Grunewald married and had fourteen children. Later I will return to these Goldschmidt cousins and report on them more fully. 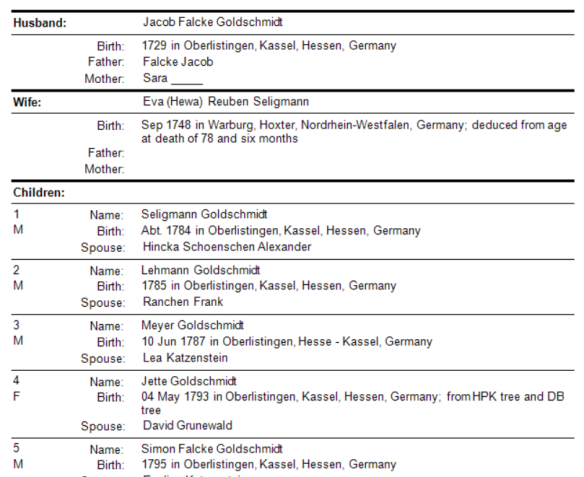 [1] There is no known familial connection between Eva Reuben Seligmann, who was born in Warburg, Germany, and my Seligmann ancestors from Gau-Algesheim.

[2] This information all comes from Dieter Carl’s book as excerpted on the Cibella-Baron website. I will be focusing only on the children of my direct ancestor, Jacob Falcke Goldschmidt.

37 thoughts on “Introducing the Goldschmidts of Oberlistingen”