This is Part IV of an ongoing series of posts based on the family album of Milton Goldsmith, so generously shared with me by his granddaughter Sue. See Part I, Part II, and Part III at the links.

In addition to the biographies of his father Abraham and paternal grandfather Seligmann Goldschmidt, Milton Goldsmith wrote about his mother’s family. His mother was Cecelia Adler, Abraham’s first wife, and she was the daughter of Samuel Adler and Sarah Kargau. Although Cecelia’s family is only related to mine through her marriage to Abraham, it is nevertheless fascinating to read about her parents.

Here is Milton’s page about his maternal grandfather, Samuel Adler: 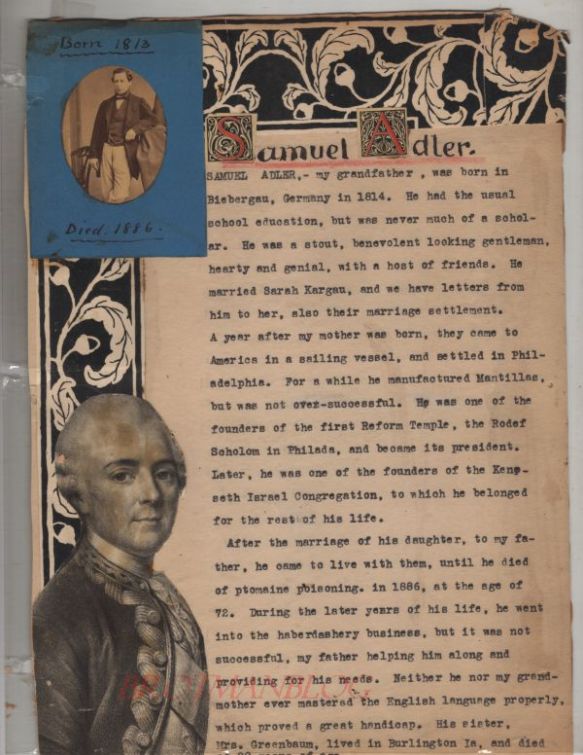 Samuel Adler,–my grandfather, was born in Biebergau, Germany in 1814. He had the usual school education, but was never much of a scholar.  He was a stout, benevolent looking gentleman, hearty and genial, with a host of friends.  He married Sarah Kargau, and we have letters from him to her, also their marriage settlement. A year after my mother was born, they came to American in a sailing vessel, and settled in Philadelphia. For a while he manufactured Mantillas, but was not over-successful. He was one of the founders of the first Reform Temple, the Rodef Scholom in Philada, and became its president. Later, he was one of the founders of the Keneseth Israel Congregation, to which he belonged for the rest of his life.

After the marriage of his daughter, to my father, he came to live with them, until he died of ptomaine poisoning in 1886 at the age of 72. During the later years of his life, he went into the haberdashery business, but it was not successful, my father helping him along and providing for his needs.  Neither he nor my grandmother ever mastered the English language properly, which proved a great handicap. His sister, Mrs. Greenbaum, lived in Burlington, Ia. and died at 90 years of age.

I was left with the impression that Samuel was a wonderful man and well-loved by his family and his community, but not much of a businessman. Certainly he did not measure up to Abraham’s success in business in Milton’s eyes, but this is nevertheless a very loving tribute to his grandfather.

Milton also included this photograph of his grandfather Samuel. But is the man depicted on the lower left side of the page supposed to be Samuel looking like a young George Washington? Or someone else? Any ideas? 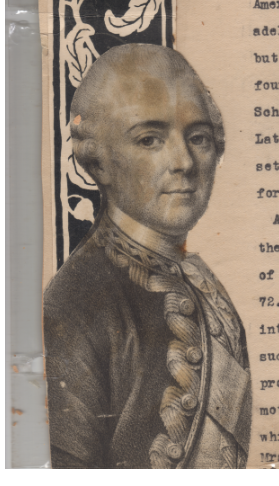 As for his maternal grandmother and her family, Milton provided this page: 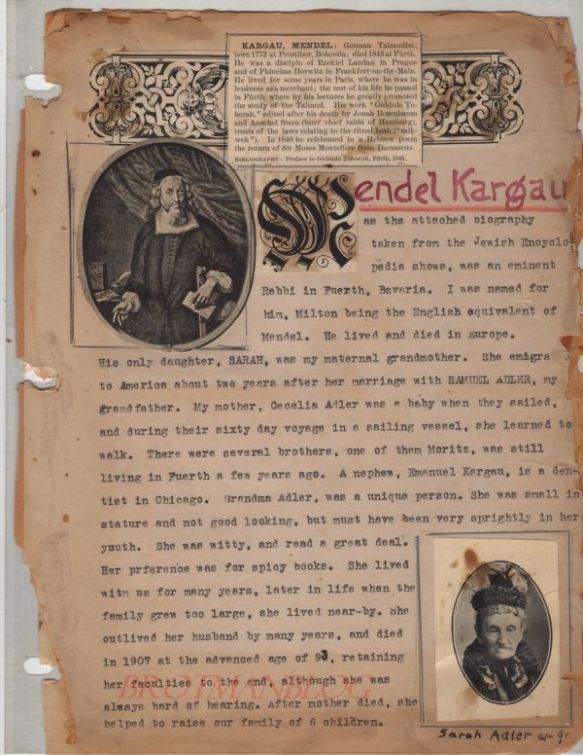 From looking at this page, I realized that some of the decorative art in this album was probably supplied by whoever manufactured the album. The inserted article at the top overlaps some of that decoration. It is a short biography of Mendel Kargau, Cecelia Adler’s maternal grandmother and Milton’s maternal great-grandmother: 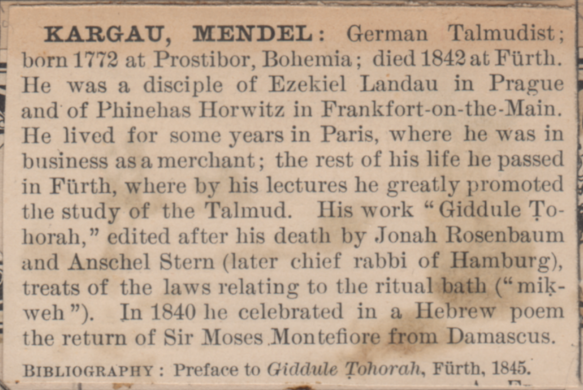 This short biography (taken from the Jewish Encyclopedia, according to Milton) shows that unlike her father Samuel Adler, Cecelia’s maternal grandfather was quite scholarly. In his essay about Mendel Kargau and his daughter Sarah Kargau Adler, Milton wrote:

Mendel Kargau, as the attached biography taken from the Jewish Encyclopedia shows, was an eminent Rabbi in Fuerth, Bavaria. I was named for him, Milton being the English equivalent of Mendel.  He lived and died in Europe.

His only daughter, SARAH, was my maternal grandmother. She emigrated to America about two years after her marriage with SAMUEL ADLER, my grandfather. My mother, Cecelia Adler was a baby when they sailed, and during their sixty day voyage in a sailing vessel, she learned to walk. There were several brothers, one of them Moritz, was still living in Fuerth a few years ago. A nephew, Emanuel Kargau, is a dentist in Chicago. Grandma Adler, was a unique person. She was small in stature and not good looking, but must have been very sprightly in her youth. She was witty, and read a great deal. Her preference was for spicy books.  She lived with us for many years, later in life when the family grew too large, she lived near-by. She outlived her husband by many years, died in 1907 at advanced age of 93, retaining her faculties to the end, although she was always hard of hearing. After mother died, she helped to raise our family of 6 children.

When I researched Milton’s family, I noted that after his mother Cecelia died, his maternal grandparents Samuel and Sarah Adler lived with the family, and I’d assumed that Sarah had taken on part of the responsibility of caring for her daughter’s motherless children. Milton’s essay confirmed that assumption and painted a picture of a grandmother who was lively, interesting, and, his words, unique. I found it amusing that he said she wasn’t good looking. Maybe at 93 she wasn’t or even in her fifties when Milton was a child. Like most children, he probably just saw his grandma as an old lady.

I love this photograph of his grandmother. I have zoomed in on it here so that we can see Sarah Kargau Adler more clearly. I bet she was attractive as a young woman when she swept Samuel Adler off his feet. The letter he wrote before their wedding certainly reveals a man deeply in love. I will save that for my next post. 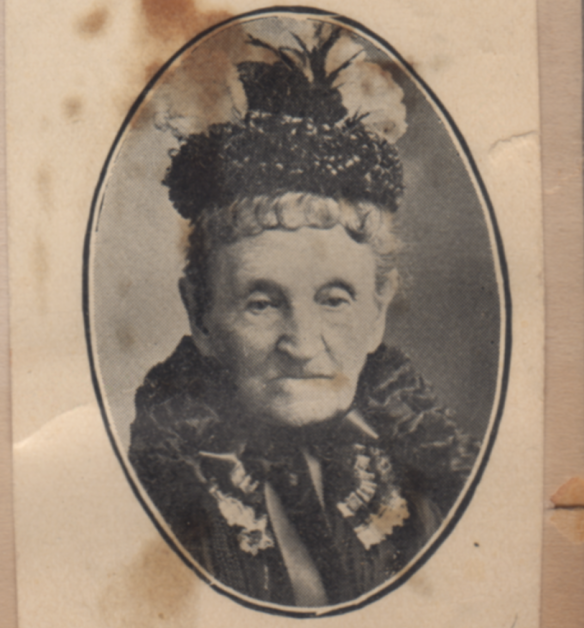