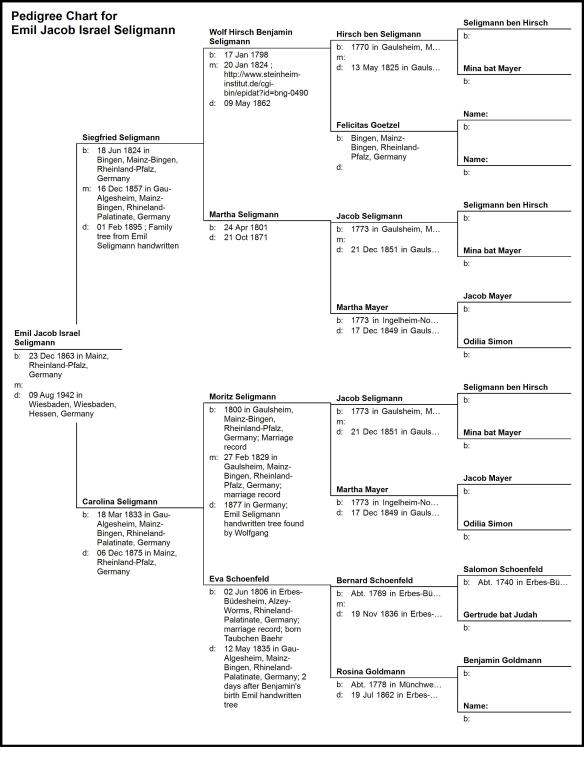 He married Anna Maria Angelika Illian on February 10, 1907, in Erbach, Germany. Their marriage record indicates that Anna Maria was Catholic, so theirs was an interfaith marriage.

Emil, Sr., and Anna Maria had two children—Emil Jacob, Jr. and Christina. From these names, we can see that Emil, Sr., was not keeping to Jewish naming traditions, having a son who shared his name and a daughter named Christina and known as Christel.

One other observation: Emil Jacob, Jr., was born on May 27, 1901, almost six years before the date on his parents’ marriage record. 1 I wonder whether there were legal or other obstacles that prevented Emil, Sr., and Anna Maria from marrying earlier.

According to Emil, Sr.’s death certificate, he died from arteriosclerosis on August 9, 1942, at home in Wiesbaden. He was 78 years old. His wife Anna Maria had predeceased him on January 31, 1942, in Wiesbaden; she was 71. She died from heart disease.2

The Arolsen Archives had this registration card for Emil, Sr., dated sometime after June 30, 1941. I know this is pure speculation, but I do have to wonder whether the stress of the Nazi era contributed to their deaths. 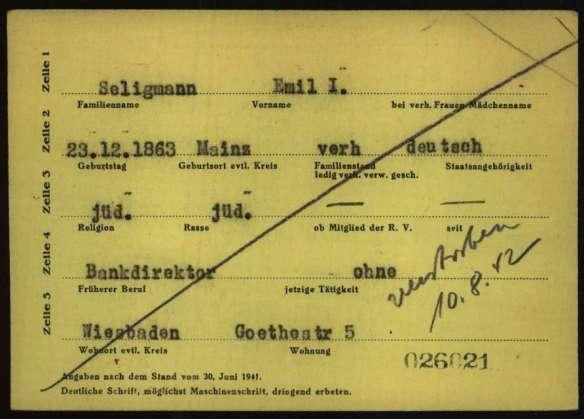 The fate of their son Emil, Jr., sheds some light on that, especially from the papers that Wolfgang located at the Arolsen Archives. There is an entire folder for Emil, Jr., of forms connected to his time at Buchenwald, and those forms reveal a great deal not only about Emil but also about the Nazi mindset. I will only post a few of the forms in the folder—those that reveal the most important information about Emil.

First is his Haeftlings-Personal-Karte or his personal prisoner’s card, which includes information about his birth, his parents, his physical characteristics, as well as other matters. Note that it asks for his religion, and he responded “R.K.,” or Roman Catholic. That is, Emil was imprisoned at Buchenwald even though his mother was Catholic and he identified as Catholic.

Note also at the top that it says “Mischl. 1 Gr.”, or Mischling First Degree. “Mischling” means hybrid in German, and it was the way Nazis labeled those who were from a mixed background and not 100% Jewish in their ancestry. A Mischling First Degree meant someone who had two Jewish grandparents, as Emil, Jr. did. The First Supplementary Decree of November 14, 1935 to the Nuremberg Laws on Citizenship and Race first promulgated on September 15, 1935, established standards for defining who was a Jew for Nazi purposes and included this provision:

(1)  A Jew is an individual who is descended from at least three grandparents who were, racially, full Jews…

(2)  A Jew is also an individual who is descended from two full-Jewish grandparents if:

(a)  he was a member of the Jewish religious community when this law was issued, or joined the community later;

(b)  when the law was issued, he was married to a person who was a Jew, or was subsequently married to a Jew;

(c)  he is the issue from a marriage with a Jew, in the sense of Section I, which was contracted after the coming into effect of the Law for the Protection of German Blood and Honor of September 15, 1935;

(d)  he is the issue of an extramarital relationship with a Jew, in the sense of Section I, and was born out of wedlock after July 31, 1936.

There are many other sources shedding light on the definition of Mischling and the treatment thereof by the Nazis including those linked to here and here and here.

Emil did not fall into any of those disqualifying categories so was classified as a Mischling, First Degree. But what did that mean for Emil?

Well, as you can see from his card, he did not escape persecution. He was sent to Buchenwald by the Gestapo through Frankfurt, in 1944. The card says “eingewiesen am” August 21, 1944, and “eingewiesen am” translates as “instructed on,” but I assume in this context it means something more threatening than instruction. The “grund” or reason given for this action was that Emil was a “Polit. Mischl. 1 Gr,” meaning that he was arrested for political activity, not just for being a Mischling, First Degree.

Another card in the file shows that he was “eingeliefert” or admitted to Buchewald on August 21, 1944. 3   On that card it shows what Emil brought with him: a cap, one pair of cloth pants, a shirt, a skirt (?), and two pairs of shoes—laced shoes and clogs. 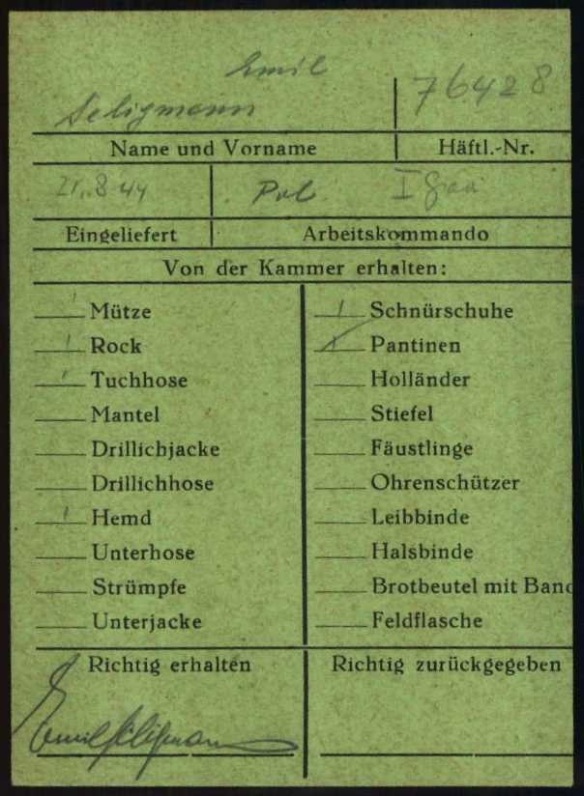 What the following form in the folder revealed makes the fact of Emil’s arrest and imprisonment even surprising. This is the prisoner registration form used at Buchenwald and the other Nazi concentration camps. It repeats most of the personal information Emil provided on the prisoner’s card above, but note the line that says “Kriegsdienstzeit.” That translates as military service time, and Emil reported that he had served in the infantry from 1940-1941. That is, Emil had been a soldier in the German army for two years of World War II. And now he was imprisoned at Buchenwald.

Tragically, Emil did not survive his time at Buchenwald. Less than six months after his initial imprisonment he died from a heart attack on February 14, 1945. He was 43 years old.

According to this card, which Wolfgang translated for me, Emil had been admitted to the infirmary the day before for diarrhea. Emil must have been quite ill, likely from mistreatment and poor nutrition, to have died so young. 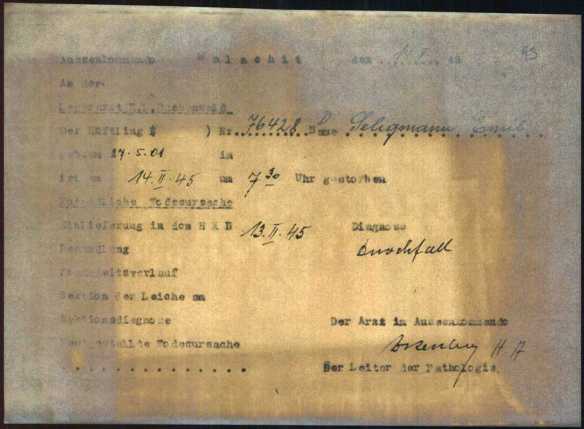 Extract from the Book of deceased of the prisoners’ infirmary ward of Concentration Camp Buchenwald, 1.1.5.1 / 5348508, ITS Digital Archive, Arolsen Archives

Just a few months later, Germany was defeated by the Allies, and the concentration camps were liberated. Emil could have lived a full life instead of having it cut short by the Nazis.

My next post will tell the story of Emil’s sister, Christine.

32 thoughts on “How the Nazis Treated Children of Mixed Marriages, Part I: Emil Seligmann”