I am really torn. Do I post about my family history in these times when we are all so anxious and focused on the present and the future, not the past? I prepared this post a few weeks ago, and in re-reading it now, I decided that reading about how others faced serious threats to their lives and their family’s lives might provide hope and strength to some who read it. So I am going forward.

Thus far we have seen what happened to three of Abraham Loewenthal and Keile Stern’s children and their children during the Holocaust. This post will report on the two youngest siblings, Helene and Martha, and their families. How did their lives change as a result of the Holocaust?

We saw that Helene Loewenthal’s first marriage to Edward Feuchtwanger had not lasted and that in 1913 she had married Oscar Friedrich August Heinrich Maximilian Schultze. They had one child, Elisabeth Auguste Aloysia Schultze, born on December 3, 1914, in Coblenz, Germany, where she was baptized on May 12, 1915. Thanks to my dear friend Aaron Knappstein, I now have Elisabeth’s birth record.

Notice that it indicates that her religion was evanglische, i.e., Protestant.

Oscar Schultze died on September 6, 1931, in Hanover, Germany. (Thank you again to Aaron Knappstein for obtaining this death record for me.) He was survived by his widow Helene and daughter Elisabeth. 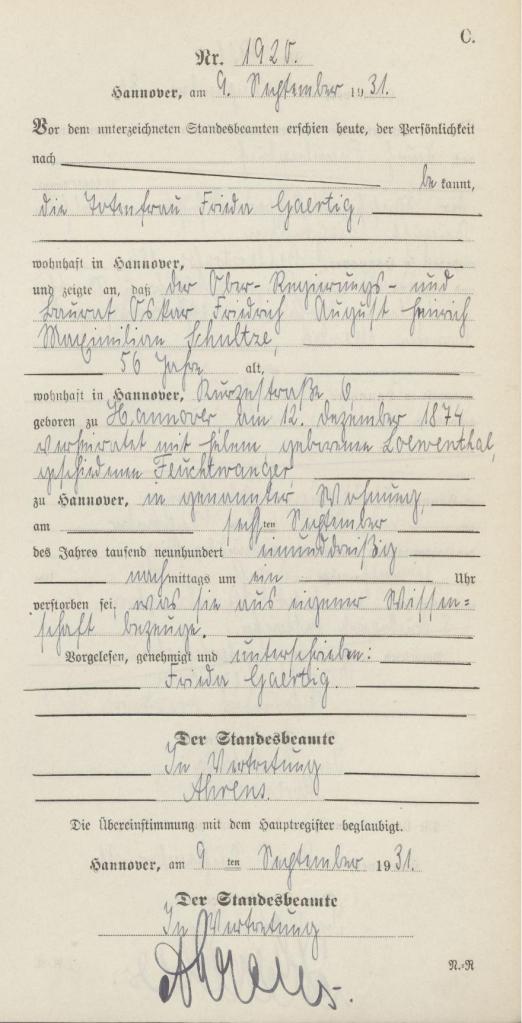 Despite the fact that Elisabeth was raised as a Christian and that her mother Helene had married a Christian, both Elisabeth and Helene were enumerated as minorities on the 1939 Minority Census in Germany, living in Hannover.1 Helene died three years later on November 28, 1942, according to this document found in the Arolsen Archives. She was 65. It incorrectly lists her birth name as Loewenstein, not Loewenthal, but this is definitely my cousin Helene.

I don’t know what happened to Elisabeth during the Nazi era after 1939. She would have been considered a “Mischling” of the first degree since her mother was born Jewish as were her mother’s parents, and not as a Jew because she was not disqualified from being a Mischling under the criteria enumerated by the Nazis, that is, she was not raised as a Jew nor was she married to one before 1935. Whether she faced any persecution or not is not clear, but we’ve seen that other Mischlings were persecuted.

But Elisabeth did survive the war. As indicated on the annotation to the birth record shown below, Elisabeth married in Hamburg in 1955 and died in Bad Krozingen in 1991. Aaron Knappstein is now looking to see if he can find her marriage and death records. Since it appears that Elisabeth married when she was 41, I assume she did not have children.

As for Martha Loewenthal, I have mostly secondary information from my cousins Roger Cibella and David Baron and numerous unsourced family trees on Ancestry and Heritage, but I will report what I can as best I can to do honor to these cousins. We’ve seen already that she married Jakob Wolff and that they had three children in the first decade of the 20th century: Anna, Hans Anton, and Hans Walter.

UPDATE: Thank you once again to Aaron Knappstein, who has located the marriage record for Anna Wolff and Simon Wittekind. They were married on June 7, 1929, in Frankfurt. Simon was the son of Wilhelm Wittekind and Fanny Mendele, and he was born in Bad Kissingen on December 10, 1892. He had served in World War I for Germany.2 He was a doctor.

Less than a year after witnessing her daughter’s marriage, Martha Loewenthal Wolff died on May 19, 1930, in Frankfurt, as we saw.

Her widower Jakob Wolff immigrated to Palestine on August 21, 1934. By that time Jakob had remarried; his second wife was Ilse Gruenebaum, born October 27, 1901, in Maden, Germany. They became naturalized citizens of Palestine on July 21, 1938.3

MyHeritage reports that Jakob and Martha (Loewenthal) Wolff’s children all also ended up in Palestine/Israel, where they married and had children and have descendants still living in Israel. Their father Jakob died on October 14, 1953, in Israel. He was 77.4

If and when I find more documentation for Elisabeth Schultze and the descendants of Martha Loewenthal Wolff, I will update this post. For now, that brings to a close the stories of the children of Sarah Goldschmidt Stern’s daughter Keile and her husband Abraham Loewenthal. Next I will turn to the families of Keile’s brother Abraham Stern and his wife and cousin, Johanna Goldschmidt, and their fate during and after the Nazi era.