Turning for a bit from the Goldschmidt family, I need to discuss some updates involving the Seligmann family. Some of this information came from my cousin Wolfgang, some from Aaron Knappstein.  In this post I will look at some documents that Wolfgang located about Martha Oppenheimer Florsheimer, and then in the next post some relating to her brother Moritz Oppenheimer.

Martha married Heinrich Florsheimer on September 18, 1902, in Butzbach, Germany. They had two children, Gertrud and Paul. Martha and Heinrich were divorced on April 12, 1913. Martha was sent to the concentration camp at Theriesenstadt on September 2, 1942, and was released from there on July 8, 1945. She returned to Wiesbaden, where she’d been living before the Holocaust, only to learn that both of her children had been murdered by the Nazis, Gertrud at Sobibor and Paul at Majdanek.

The earliest of the new documents that Wolfgang located at the archives in Wiesbaden about Martha was dated March 7, 1940, and appears to be a form Martha submitted to report her assets and expenses. She appears to have reported no assets, and under expenses she reported 78.50 Reich Marks a month (I’m not sure what the 65 refers to) for rent, heat, gas, electricity, and water.

On page 2 of this document, Martha wrote the following note:

Matthias Steinke of the German Genealogy group kindly translated this for me as, “I am supported by my still working daughter and my formerly employed son.”

On December 6, 1940, Martha wrote this note in Wiesbaden:

Thank you to the members of the German Genealogy group who worked to decipher this difficult handwriting. This was the translation done by Matthias Steinke:

I am at the 1st march 1876 in Offenbach/Main born and the wife of the at the 7th January 1921 in Cologne deceased merchant Heinrich Flörsheimer.

My daughter Gertrude Sara Flörsheimer was born at the 24th january 1904 in Gross Gerau. Her at the 12th May 1927 in Wiesbaden happened matrimony with the administrator Fr. Heitmann was at the 10th January 1930 in Wiesbaden divorced. My daughter took her maiden-name back later.

I am not sure who this note was written to or for what purpose, except perhaps to register their names and marital status with the officials in Wiesbaden. Or perhaps it was a follow-up to the earlier document seen above.

We hereby indicate that the aforementioned Jewish woman has been restricted due to your security order from 9 14 40 to 25 8 42, because she expected the receipt of a larger payment, coming from furniture sales. On 4 9 42, the only entry received the amount of RM 594. Due to the disposition of the Governmental Practitioner Wiesbaden from 27 8 42 I 9-337 / 42, the fortune of this Jewish woman has been confiscated in favor of the Reich. We have therefore transferred the above amount to Finanzkasse Wiesbaden under file number O. 5205/494. Heil Hitler.

I am not sure what all of this means, but I got the gist of this—that all of Martha’s assets had been confiscated by the Nazis.

One thing of note on these forms is that Martha is identified as a widow, not as a divorcee, even though her marriage record records the divorce: 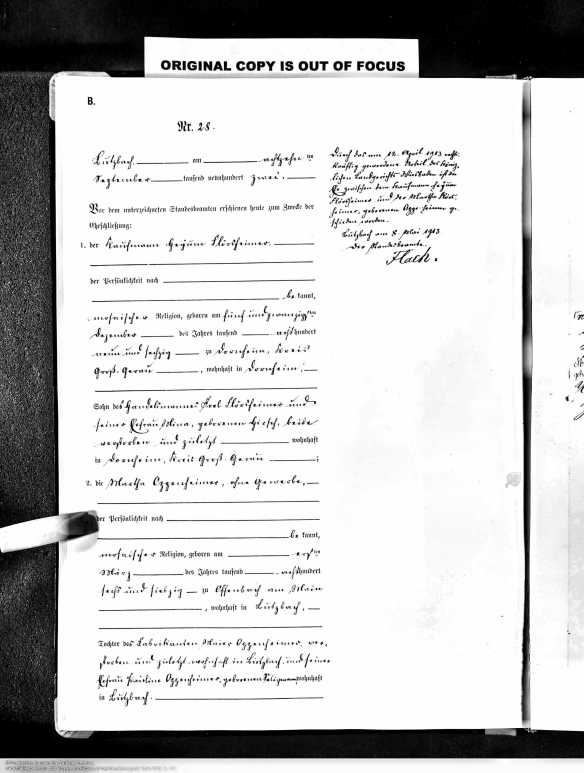 And interestingly she did not hide her daughter’s status as a divorcee, as seen above. So why hide hers?

Finally, Aaron also sent me a photograph of Heinrich Florsheimer’s headstone, which confirms the date of death reported by his ex-wife Martha in 1940:

These extra documents fill in some of the gaps in Martha’s life. The documents from the Nazi era are particularly poignant. Martha lost so much. Of course, losing her children was the most horrific loss, but she also lost all her property to the Nazis.