Last time I shared the documents my cousin Wolfgang Seligmann found at the Wiesbaden archives about our mutual cousin Martha Oppenheimer Florsheimer. Today I want to share the documents Wolfgang found about Martha’s brother Moritz James Oppenheimer. Martha and Moritz were my great-grandmother Eva Seligman Cohen’s first cousins; they were the children of Pauline Seligmann, the sister of my great-great-grandfather Bernard Seligman.

As I’ve previously written, Moritz Oppenheimer was born on June 10, 1879, in Butzbach, Germany. Sometime before 1902, Moritz married Emma Katherina Neuhoff, who was not Jewish. Moritz and Emma had two children: Paula (1902) and Walter (1904). Moritz owned a paper factory in Frankfurt before the war as well as a large and very successful horse stud farm where thoroughbred horses were raised and sold. As his granddaughter Angelika reported to me, Moritz was a member of the board of directors of several companies throughout Germany. He was a very successful and wealthy man.

Moritz was arrested in the autumn of 1933. His marriage to Emma was dissolved because mixed marriages were not legal under the Nazi regime. Then his assets including his horse farm were confiscated and put into the hands of an administrator, who sold them at far below their market value. According to his son Walter, Moritz had been in good health up to this time, but these actions caused him to become quite ill. After being visited by Gestapo, he reportedly took his own life on May 4, 1941.

Wolfgang found three documents that illustrate just how desperate Moritz’s situation was. I am deeply grateful to Cathy Meder-Dempsey of the blog, Opening Doors in Brick Walls, who translated all three of these documents.

The first is a letter written by Moritz in early 1941 regarding his taxes for the year 1940.

Transcribing and translating this letter presented some real challenges because, as you can see, the first several letters of the first word on the left side of the letter were not visible, but somehow Cathy was able to make sense of it all.

Here is her transcription and her translation of the letter:

To the tax office in Wiesbaden

In 1933, bankruptcy was declared on my assets (Frankfurt a. Main). I have neither assets nor other things of value, furniture, laundry, etc. In 1934, as a result of serious illness, (enlargement and relocation – ??), water retention, angina pectoris, (other) disorders, headache etc. I was sent to Bad-Nanheim. Until last year I was there under medical treatment and supervision. As severe rheumatoid arthritis set in, I received medical orders to take a cure in Wiesbaden. I don’t have any income possibilities and live in a furnished place. No new acquisitions have been made since 1933 as I am penniless. My livelihood as well as doctor, pharmacy, room and spa expenses have been supported with [?] 200 Mk (monthly) from my relatives. This support came from already taxed income of my relatives. I am still seriously ill.

My marriage was a mixed marriage, my wife was Aryan. My children are ____, confirmed and are not considered Jews. [I assume that the word that we cannot see was Mischling.]

I have to file another tax return, and request a form be sent.

Notation in pencil: He was asked to submit a declaration of income for the year 1940.

Cathy thought he was writing to get the correct tax form for someone in his financial position.

Although I had read his son Walter’s description of Moritz’s financial and medical condition, reading this letter written by Moritz himself was just heartbreaking. Here was a man who had found incredible success in business brought down to being very sick and penniless.

The second document I received from Wolfgang was a letter written by Walter Oppenheimer, Moritz’s son.

Cathy translated the typed section, written by Walter, as follows:

In an immediate polite reply to your letter of the 15th of this month that I received only today, I inform you that my father died on May 4th, 1941. Who the legal heirs are now I am not able to tell you as the two children, my sister and I, refused the inheritance in a publicly certified declaration before the local court.

I was very disturbed to see that Walter had used “Heil Hitler” in this letter, but Cathy explained that that was to be expected in a letter to officials during Hitler’s reign. Nevertheless, it made the hair on my arms stand to see a relative of mine use that expression.

I wondered why Walter and his sister Paula would have refused the inheritance, and Cathy suggested that it was a means of avoiding taking on their father’s debts since there were apparently no assets to inherit.

The handwritten notes on the bottom of the letter appear to have been made by some official commenting on the status of Moritz’s inheritance, as transcribed and translated by Cathy:

Inquiry to the district court Frankfurt am Main

who is administrator, and who are the legal heirs, after the children refused inheritance.

To the district court Frankfurt am Main

Moritz Israel Oppenheimer, who previously lived there, born on June 10, 1879 died here on May 4, 1941. The son of the same, Dr. Walter Georg Oppenheimer, a resident of Frankfurt am Main, Schumannstrasse 47, announced that his sister and he (symbols? probably mean disclaimed inheritance). I only ask ____ from 2 to 4 weeks.

Finally, the third document Wolfgang found in the Wiesbaden archives about Moritz is this handwritten page of notes about Moritz’s “income” for the first few months of 1941 before his death:

I’m not really sure what to make of all the numbers or the value in today’s money. I also have no idea what were the practical consequences of these calculations. Did Moritz (or his estate) owe taxes based on the money he was getting from his son?

What I think I can safely infer from these last two documents is that even after seizing all of the assets of Moritz Oppenheimer and driving him into bankruptcy, poor health, and ultimately suicide, the German government was still looking for some way to collect more money from his family.

Thank you again to Cathy Meder-Dempsey for her hard work in transcribing and translating these difficult to read documents. They add insights into the awful suffering of my cousin Moritz Oppenheimer. 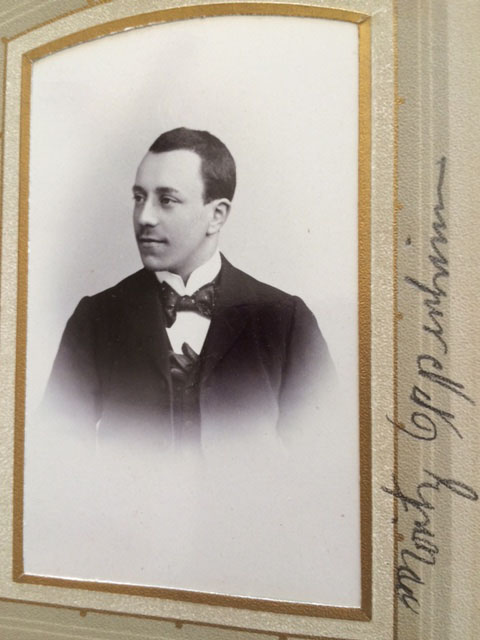 UPDATE: A few readers asked me what I know about Emma Neuhoff-Oppenheimer’s life after Moritz died in 1941. I asked Angelika, Emma’s granddaughter, and she sent me this article:

Most of it is about her life as a horseback rider, but the last part of the article addresses her life during and after the Nazi era. I will translate just that section:

“Ms. Emma never lost her dignity and discipline. Even in the bitter years of the ghost, when the beloved man fell victim to the Nazi regime, when her life became dark, often lonely. A courage deeply rooted in her and the quiet cheerfulness accompanied her to the age that she now enjoys with good reading with the two children and children-in-law, the two grandchildren, and many loyal friends.”

Emma Neuhoff-Oppenheimer died on February 2, 1968, at the age of 86, three years after this article was written. Angelika also told me that her grandmother owned a shop in Frankfurt and played the piano.

37 thoughts on “How The Nazis Destroyed My Cousin Moritz Oppenheimer”