Back in May, I wrote about Amalie Meyer Bloch, the granddaughter of Jacob Meier Goldschmidt and Jettchen Cahn, daughter of Regina Goldschmidt and Aaron Meyer. One question that lingered was how Amalie and her daughter Ilse ended up separated from Amalie’s husband Charles Bloch.

I knew from one of the Arolsen Archives document available through Ancestry that Charles had gone to Paris, and I knew that he eventually rejoined Amalie and Ilse in the US in 1946, reporting that his last address had been in Toulouse, France. But what I didn’t know was when Charles had gone to Paris and where he was in France during the war after Germany’s invasion of France in 1940. 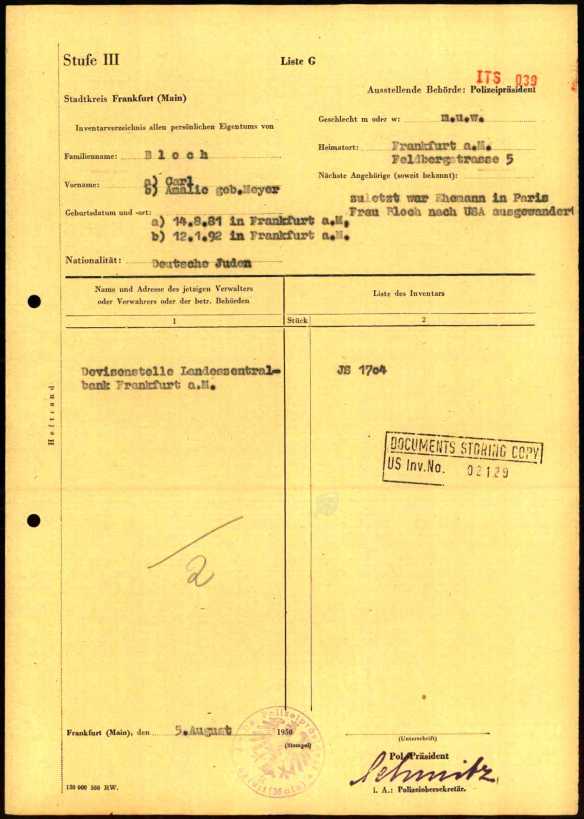 Barb276, one of my readers, suggested that I contact the ITS (International Tracing Service) and file a request for more information about Charles since not all of their documents are available through the Arolsen Archives. I did as she suggested back in May and was told that it would take ten months to complete the investigation and report back. I prepared myself for a long wait.

You can imagine my surprise when just a week or so ago I received a report back from ITS with more documents about Charles. Those documents don’t really answer my questions, unfortunately, but they did reveal one more piece of the puzzle.

Charles was one of the thousands of Jewish men who were rounded up during and after Kristallnacht in November 1938 and sent to the Buchenwald concentration camp. He was released in December 1938. 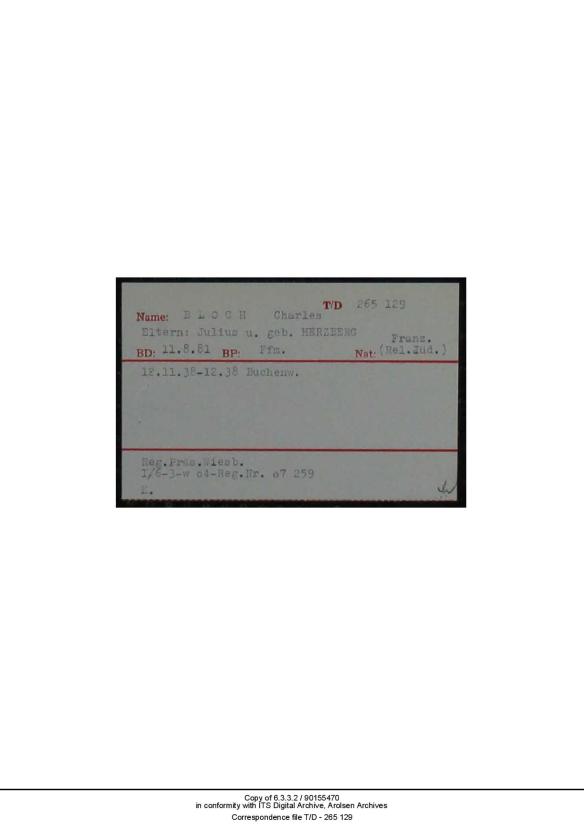 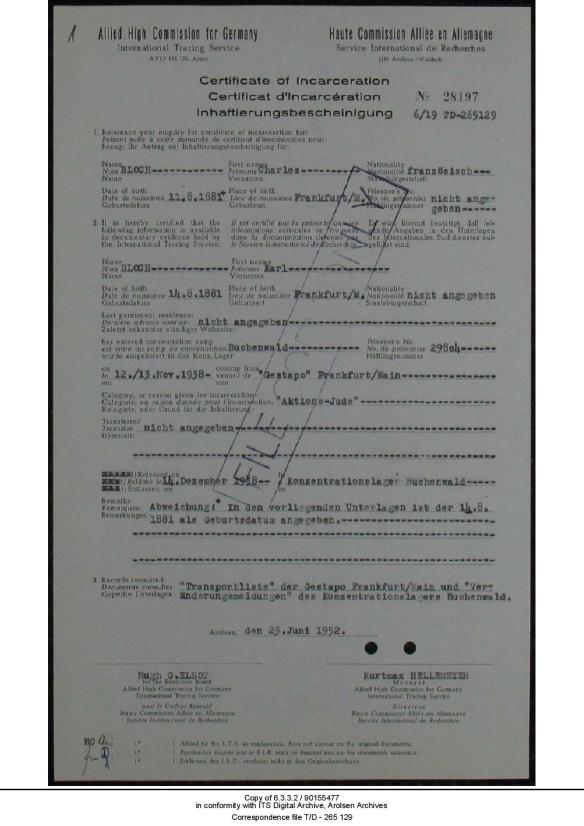 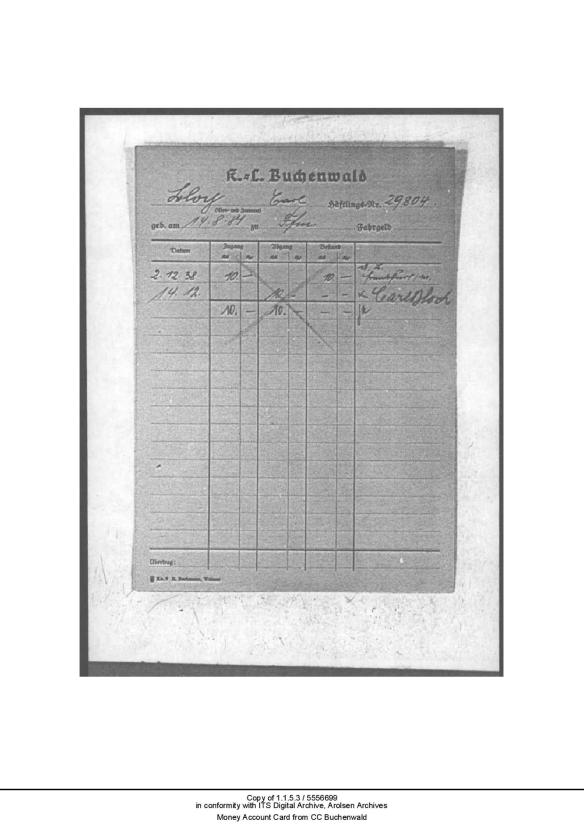 My working hypothesis is that upon his release, he left Germany for France. One of the ITS documents, a property inventory prepared after the war in 1950, described Charles as a “französischer Jude,” a French Jew. I wasn’t sure what to make of that since Charles was also documented as German-born—born in Frankfurt in 1881. That same document also states that Amalie is “gilt als staatenlos,” considered stateless. So maybe the reference to Charles as a French Jew meant that he had become a citizen of France after immigrating there. 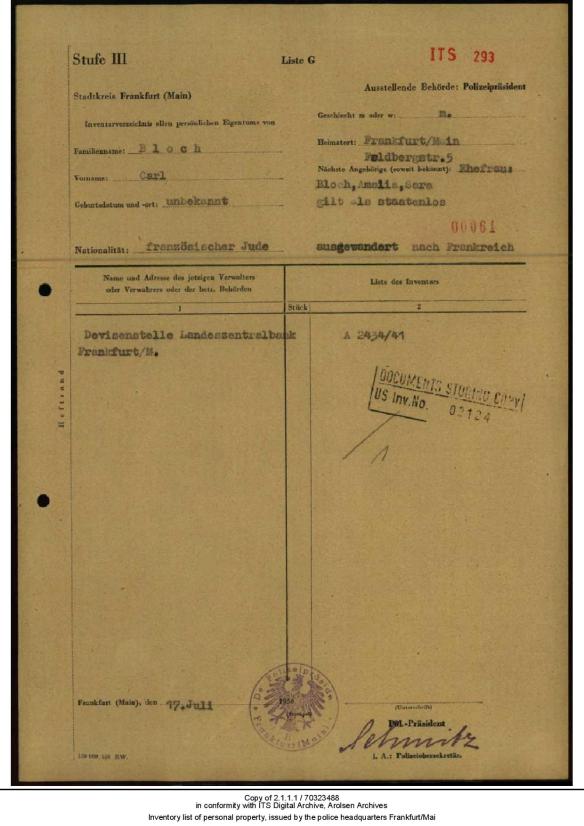 It would make sense that Charles would leave Germany in early 1939 after his experience at Buchenwald. As seen in my earlier post, his daughter Ilse had gone to England by 1939. But it seems that Amalie was not in England or France at that point. On her November 27, 1941, declaration of intention to become a US citizen, Amalie reported that Charles was at that time residing in France, Ilse was residing in New York, and that Amalie herself had last resided in Lisbon, Portugal. 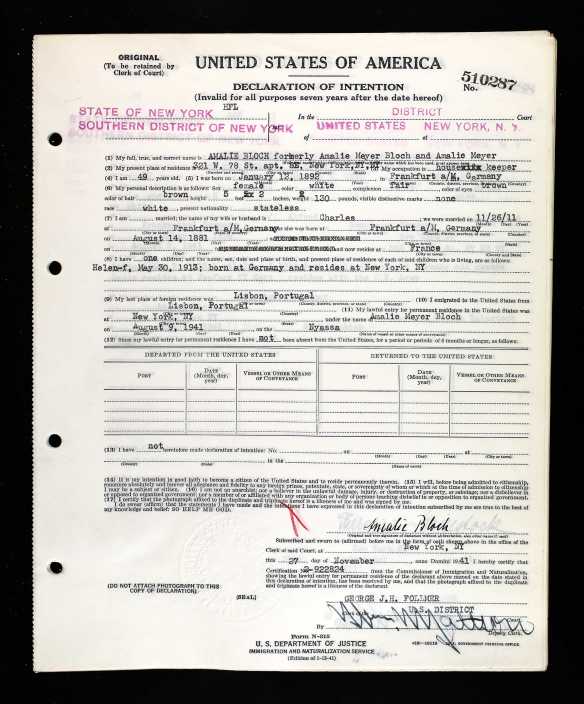 My hunch is that Amalie stayed behind in Germany longer than her husband and daughter and then somehow escaped to Portugal after the war started. But I could be wrong. My other hunch is that Charles escaped from Paris after the Nazis invaded and somehow survived the war in southern Vichy-controlled France, finally arriving in the US a year after the war. Although I don’t know more about Charles’ time there, I did find a Jewish Telegraphic Agency news release dated April 29, 1941, reporting that Jewish refugees had been expelled from Toulouse. I’ve no idea, however, how that impacted Charles Bloch.

Unfortunately, the ITS documents do not reveal anything about Charles’ time in France during or after the war. Nor do I have any more information about how Amalie ended up in Portugal or when. And since they have no living descendants, I fear I can only rely on my hunches and speculation to fill in these gaps.

22 thoughts on “Gaps in the Story: How Did Amalie and Charles Bloch Escape from Nazi Germany?”