Before I return to the family of Meyer Goldschmidt, I have two more posts to share relating to other family members.

Today I want to share some wonderful photographs I received from my fourth cousin, once removed, Patricia, the daughter of Heinz Vogel, granddaughter of Sophie Katz and Isaak Vogel, great-granddaughter of Rosa Katzenstein and Salomon Feist Katz.

On September 10, 2019, I wrote about this family and told the story of the escape of Sophie and Isaak and their sons Heinz and Carl to Argentina from Nazi Germany in the 1930s. It was due to the generosity of Patricia and also Carl Vogel’s daughter that I was able to share details of the Vogel’s story and how they rebuilt their lives in Buenos Aires as well as many wonderful photographs.

This is a photograph of Rosa Katzenstein in 1887 when she was 28 and married to Salomon Feist Katz for six years. (I’ve edited these photographs a little to improve clarity.) Rosa was my great-grandmother Hilda Katzenstein’s second cousin, once removed. I see a resemblance to Hilda. What do you think?

Taken that same year is this photograph of Salomon, who was 35 at that time. Salomon was also my cousin (and Rosa’s cousin). He was my third cousin, three times removed, through our shared ancestors, Schalum and Brendelchen Katz, my fifth great-grandparents. He was Hilda’s third cousin.

Patricia also sent me images of what was on the reverse of these photographs. Can anyone read the words above their names?

UPDATE: Thank you to Cathy Meder-Dempsey for transcribing the top words as Grossmutter (grandmother) and Grossvater (grandfather).

This photograph of Rosa and Salomon’s daughter Sophie Katz and her husband Isaak Vogel was taken in July, 1948, after they had immigrated to Argentina; the inscription on the reverse appears below it. Can someone decipher what it says? The second line says “63(?) Geburtstag 10 Jul 1948.”  Sophie was born on July 10, 1885, so this would have been her 63rd birthday. She and Isaak don’t look very happy, however.

UPDATE: Thank you again to Cathy Meder-Dempsey for transcribing the first word in the top line as aufgenommen, meaning “taken.” She wasn’t certain whether the next word was “bei,’ indicating where the photo was taken, or “von,” indicating who took the photo. And the third word was not legible.

SECOND UPDATE: Thank you to Eric, who commented below and was able to read that last word. It says Aufgenommen bei meinem 63rd geburtstag or Taken at my 63rd birthday. Thanks, Eric! 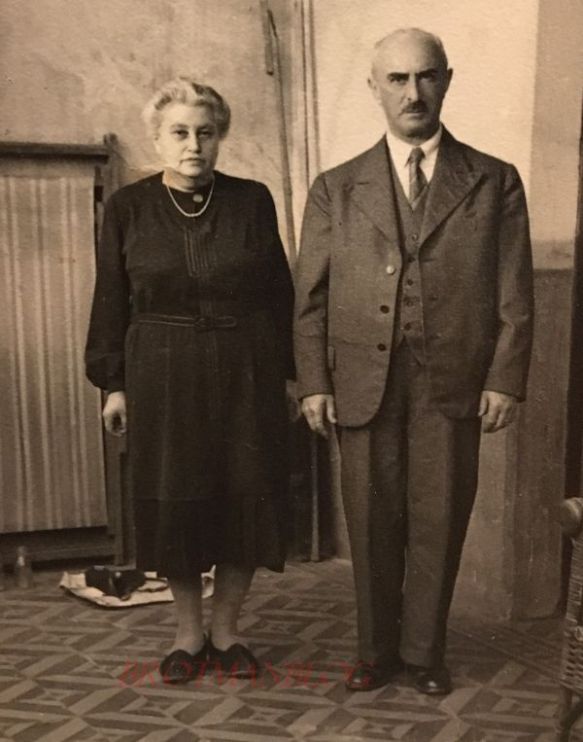 Finally, Patricia shared a photograph taken at Sophie and Isaak’s 50th anniversary celebration on June 9, 1959. That adorable little girl in the center of the photograph is Patricia herself.

When I look at this photograph and see the love and the smiles that permeate it and compare it to the stern expressions on the faces of Sophie and Isaak in 1948, it makes me think of how hard their adjustment to Argentina must have been, but also how fortunate they must have felt to have left Germany behind and to have made a whole new life for themselves in their new homeland.

I am so grateful to Patricia for sharing these with me.

Back in October 2017, I wrote about a brick wall I could not break down involving the children of my cousin Rosa Katzenstein. Rosa was my second cousin, twice removed. She was the granddaughter of Jacob Katzenstein, the older brother of my great-great-grandfather Gerson Katzenstein.

Rosa was the oldest child of Mina and Wolf Katzenstein, born on June 19, 1859, in Frankenau, Germany.

She married her third cousin, once removed, Salomon Feist Katz, son of Joseph Feist Katz and Brendel Katz of Jesberg. Rosa and Salomon were married on June 28, 1881, in Jesberg. They had four daughters, one of whom died as a child, but three survived to adulthood: Sara, Sophie, and Recha.

I had a great deal of trouble learning what happened to two of those daughters, Sara and Sophie. I knew that Sara had married Otto Loew and had two children and that Sophie had married Isaac Vogel, with whom she’d had two sons, Heinz and Carl, but that was all I could find. Then, with incredible help from my friend Aaron Knappstein, I learned that Sara and Sophie as well as their sister Recha had all left Germany in the 1930s and escaped to Argentina.

But I did not know what had happened to the two sons of Sophie Katz Vogel, Carl and Heinz. Now, thanks to more wonderful research done by Aaron Knappstein, I not only know more about their story, I actually have photographs of the family and am in touch with two new cousins.

In April, 2019, Aaron received an email with a packet of information and photographs from Ingo Sieloff, the director of the Borken museum. Back in 2009, Carl Vogel’s daughter had exchanged emails with Heinrich Broz, then the archivist for the town of Borken, and had sent him photographs and other documents and a history of her family. Mr. Sieloff sent all of this to Aaron, and  Aaron sent them on to me. Last week I took a chance and sent Carl’s daughter an email using the email address she’d had in 2009. That same day she responded and shared it with Heinz’s daughter, and now I have two new cousins with whom to share and exchange family information.

Here is more of the story of Sophie Katz and Isaac Vogel. Most of the information in this post came from my correspondence with their granddaughters and the documents and photographs they shared with me. 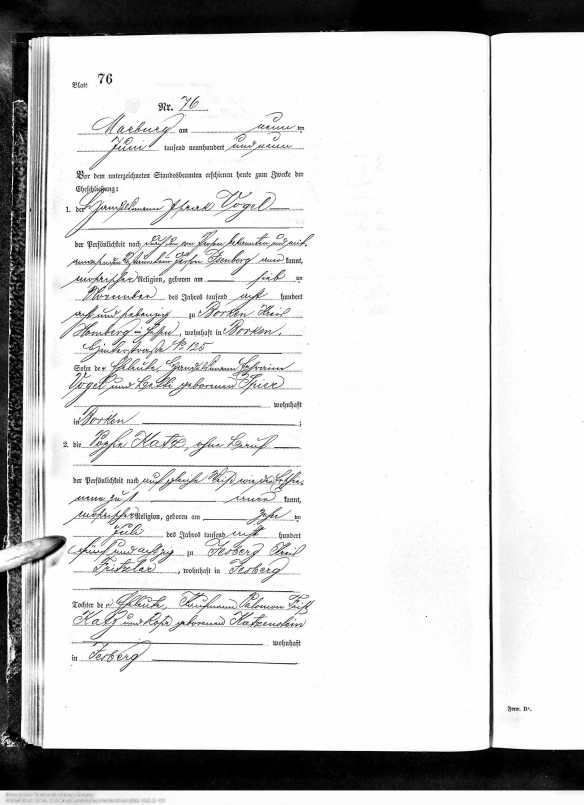 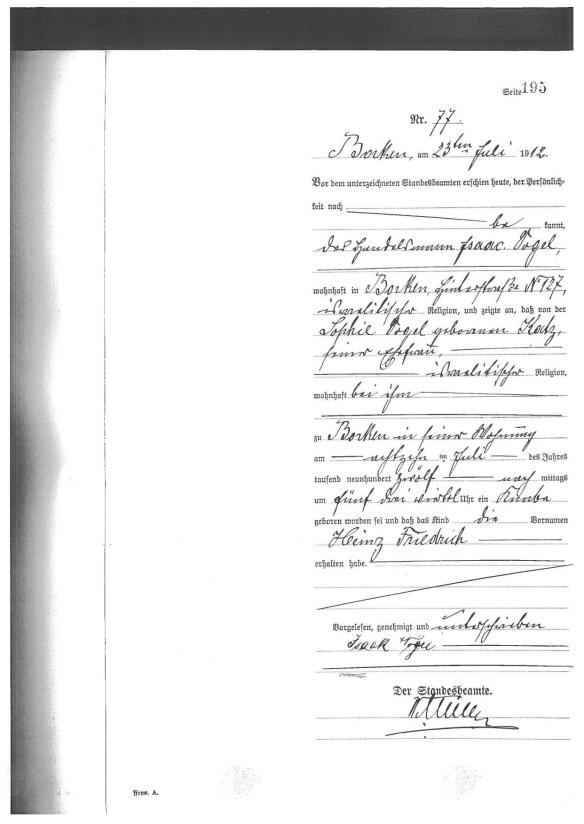 Birth record of Heinz Vogel. Courtesy of the Vogel family

During World War I Isaac Vogel served in the Germany military, fighting in France, and then was a city councilor in Borken in the 1920s. 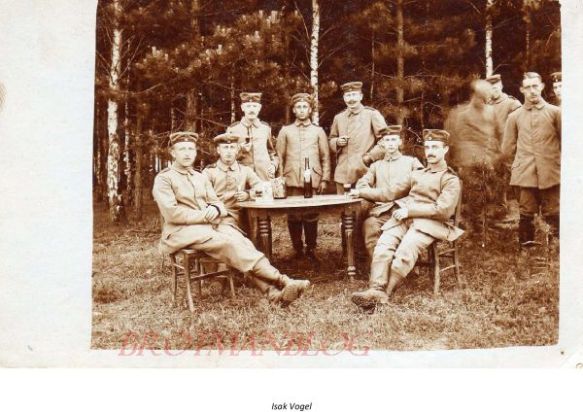 Isaac worked with his brother Moritz as a cattle trader. It was a business that Isaac and Moritz had taken over from their father Ephraim. It was a small business, but enough to support two families adequately.

Here are three photos of Carl and Heinz and their parents taken between about 1910 to about 1924 in Borken, Germany:

Heinz and Carl Vogel, c. 1910. Courtesy of the Vogel family

According to Ingo Sieloff,  the Vogel home in Borken was located at Hintergasse 125 and included a house and a stable; the house was 105 square meters or about 1130 square feet in area. It appears to be larger than that in this photograph:

I don’t know when this photograph was taken or the identities of the people standing in front.

As a child, Carl Vogel was an avid reader and a good student, and his parents decided to send him to grammar school in Kassel. During the week he lived with his uncle Moritz Vogel. Carl graduated from high school and then studied at the Philosophical Faculty of Friedrich Wilhelm University in Berlin. He also attended lectures at Rabbinerseminar and worked as a religion teacher.

These three photographs are labeled “Schule,” one with year 1921. I can find Carl in the Gymnasium photograph below (the third one); he is the young man standing fourth from the left in the back row. I assume that either Carl or Heinz is somewhere in the other two photos. Can you find them? I have guesses, but am not sure. 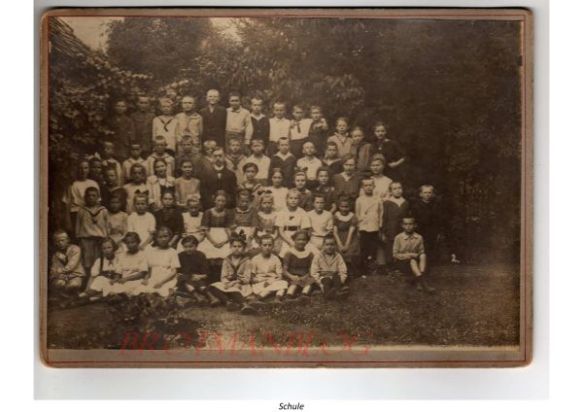 Heinz Vogel was also a very talented boy, but his parents could not afford to send both boys to high school. Instead, Heinz completed his apprenticeship as a retail merchant in Kassel at the Tietz department store.

Until 1933, the family lived a normal life. They saw themselves as Jews and as good Germans. They lived a quiet life, although there were occasional verbal anti-Semitic attacks .  But once the Nazis came to power, the Vogel cattle business suffered because farmers were not allowed to do business with Jews. Heinz Vogel also found his livelihood affected; although he was considered the best salesman in the store, he was released from his job. He then completed an apprenticeship in a practical trade in Frankfurt to prepare for emigration.

Carl read Hitler’s book “Mein Kampf” and recognized that the family needed to leave Germany. Sophie’s sister Recha Katz Goldschmidt had already left  for Argentina by 1932 after her husband Julius was beaten by the Nazis.

Carl and Heinz prepared to emigrate to Palestine, but then decided to go to Argentina since they already had relatives living there. Heinz and Carl first emigrated in 1935, and one year later their parents Isaac and Sophie and Sophie’s mother Rosa Katzenstein Katz followed. They sold their home in Borken for 9113 Reichsmarks. One source says that there were 2.5 Reichsmarks to a US dollar during World War II, so the price of the house would have been about $3,645 in US currency or about $48,000 in today’s dollars, according to this inflation calculator. They settled in Buenos Aires.

In Argentina, Carl and Heinz had to start their lives all over. But the family adapted well to their life in Argentina. The philanthropic association Asociación Filantrópica Israelita or Jüdischer Hillfsverein helped the newcomers adjust to their new country. In Buenos Aires, Isaac and Sophie continued to have a traditional Jewish home and went regularly to the liberal synagogue founded by German Jews; services were conducted in German and Hebrew and in later years, also in Spanish. Isaac and Sophie never learned Spanish, but it did not matter because they were living amidst other German Jews who had escaped from the Nazis. Isaac also tutored boys for their bar mitzvahs.

In 1943 Carl Vogel married Beate Hamburger from Frankfurt; Carl was very active and well known in the Jewish community and served as a deputy rabbi and as a bar mitzvah tutor. He also taught German and Latin. Beate also was a teacher; she gave private instruction in German and English. Carl and Beate had two children.

Heinz Vogel married Gertrud Lippman from Ludwigshafen in 1943. They had one child. Heinz started work in Argentina as an industrial worker in the meat business. Then he became a white collar worker in a big Argentina-owned multinational firm called Bunge & Born. For his job he was required to travel all over the world, including a six-month stay in India in 1954. He became the General Manager of the Jute department and traveled many times to India, Pakistan, and Bangladesh.

Although Heinz lacked the formal education his brother Carl had received in Germany, his daughter described him as a “very cultured and interesting person.” She said that her parents lived a secular life and had friends from many different backgrounds; their connection to the synagogue was limited to Yom Kippur and lifecycle events for family and friends. Heinz’s daughter also told me that Heinz was very proud to be an Argentine citizen and that when he received a diploma from the Argentine government on the fiftieth anniversary of his becoming a citizen, he was very emotional.

I feel so fortunate to have found the granddaughters of Sophie and Isaac and to have learned so much more about the courage and determination of Sophie, Isaac, Carl, and Heinz, who all started their lives over in a new place after being forced to escape from Nazi Germany in the 1930s.