This is Part X of an ongoing series of posts based on the family album of Milton Goldsmith, so generously shared with me by his granddaughter Sue. See Part I, Part II, Part III, Part IV, Part V,  Part VI, Part VII , Part VIII,  and Part IX at the links.

This is by far the sweetest and saddest page in Milton Goldsmith’s album, a page dedicated to his beloved mother, Cecelia Adler Goldsmith, who died in 1874 when Milton was thirteen years old: 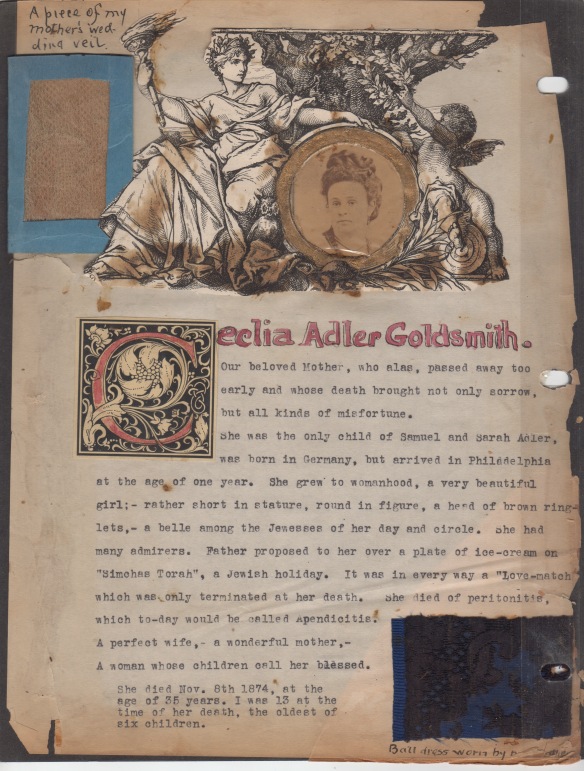 Our beloved Mother, who alas, passed away too early and whose death brought not only sorrow, but all kinds of misfortune.

She was the only child of Samuel and Sarah Adler, was born in Germany, but arrived in Philadelphia at the age of one year.  She grew to womanhood, a very beautiful girl;- rather short in stature, round in figure, a head of brown ringlets, – a belle among the Jewesses of her day and circle. She had many admirers.  Father proposed to her over a plate of ice-cream on “Simchas Torah”, a Jewish holiday.  It was in every way a “Love-match” which was only terminated at her death.  She died of peritonitis, which to-day would be called Apendicitis [sic]. A perfect wife, – a wonderful mother, – A woman whose children call her blessed.

It’s interesting to read what Milton thought was the cause of his mother’s death, which conflicts with her death certificate. According to the death certificate, she died from apoplexia nervosa:

In the upper left corner, Milton inserted a piece of Cecelia’s wedding veil: 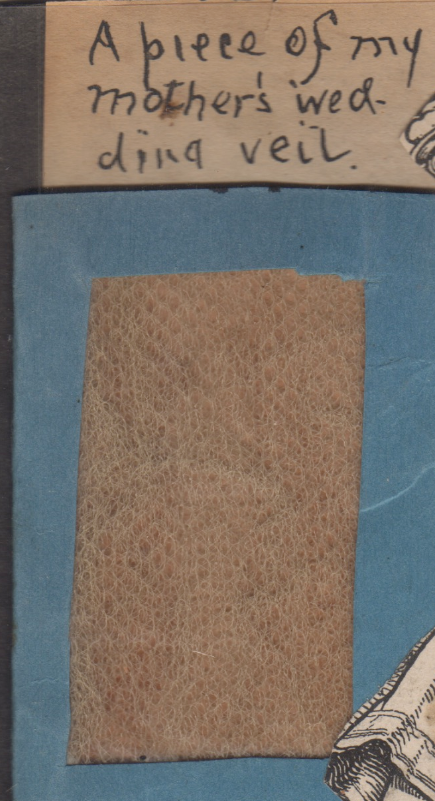 In the lower right corner, he inserted a piece of fabric from one of her ball gowns.

What a sweet and sentimental thing for a son to do. How devastated he and his father and siblings must have been when Cecelia died.