Although I was able to learn a fair amount about two of the children of Helene Katzenstein and Max Werner, Elsa Werner Loewenthal and Henriette Werner Cohen, it was much more difficult to find information about their other two children, Rosa Werner Wormser and Moritz Werner. I can only report what I’ve learned, primarily from secondary sources, and hope that perhaps by publishing this, someone who knows more about these relatives of mine will find this and provide me with more information and sources. This may be my worst sourced post ever!

Rosa Werner, as we saw, married Josef Wormser in Eschwege in 1908.  According to entries on My Heritage, Rosa and Joseph had four children, Esther (1909), Raphael (1911), Julius (1914), and Helene (1917), all born in Zurich, Switzerland, where Rosa and Joseph had relocated after marrying. It also appears that Rosa and Josef remained in Zurich during the Nazi era and survived, but I have no records of their lives there during that time. According to the information on My Heritage, Josef died in 1940 in Zurich, Rosa thirteen years later in 1953, also in Zurich.

As for their children, three of the four immigrated to Palestine/Israel. I have seen documents1 showing that Esther Wormser immigrated to Palestine, where she married Max Leo Koplowitz, who had immigrated there as early as March 28, 1932, and became a naturalized citizen of Palestine on November 19, 1937. Max was born on March 29, 1907, in Strasbourg when it was under German control before World War I (later and currently part of France). He was an agricultural worker in Palestine. According to a document in his immigration file, he and Esther Wormser married on May 21, 1939, in Petach-Tikvah, and she became a Palestinian citizen by virtue of her marriage to Max Koplowitz.

I do not have any further information yet for Esther, although David Baron and Roger Cibella reported that she and Max had two sons born in the 1940s. Max died October 26, 2006, in Israel, according to his gravestone at BillionGraves.com. There was no date or place of death reported for Esther.

Update: Thank you to Aaron Knappstein who located Esther’s grave memorial on Billion Graves. She died on 8 Iyar 5739 or May 5, 1979, in Israel.

Raphael Wormser also immigrated to Israel at some point. My Heritage reports that he married Greta Aufsasser in 1954. According to his gravestone at BillionGraves, he died August 5, 1973.

As for Helene Wormser, My Heritage shows that she married Dr. Herman Halberstadt and that they had two children; in addition, My Heritage reports that she died in Jerusalem, but did not provide a date of death.

Update: Thanks again to Aaron Knappstein, who found this entry at Gravez, showing that Helene Wormser Halberstadt died on June 22, 2007, in Israel.

The only Wormser child who did not immigrate to Palestine/Israel was Julius. He remained in Zurich where he married Betty Loewenthal and had several children, according to Baron/Cibella. Julius died in Zurich on May 11, 1989, according to My Heritage.

Thus, my information about the Wormser family is quite thin and based almost completely on My Heritage profiles. I’ve sent a message to the manager of those profiles, but have not heard anything back.

That brings me to Helene Katzenstein and Max Werner’s youngest surviving child, Moritz. We saw that Moritz married Jenny Kahn in Frankfurt in 1918 and that they had a son, Max, born in 1922. The only records I have for Moritz and Jenny after their marriage record are the 1939 England and Wales Register and their exemptions from being deemed enemy aliens in England. Thus, they had immigrated to England by 1939. Unfortunately part of the of the right margin of the 1939 Register is not visible, but it looks like Moritz was the director of London Win(dow?) Display Ltd.

He was exempted from being interned as an enemy alien; on this form he described his occupation as the company director of manufacturing company. 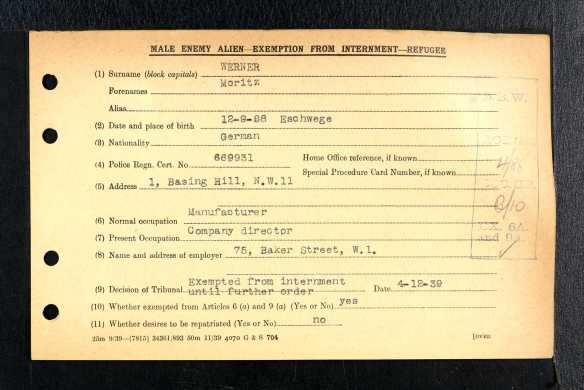 This quotation, found on Moritz Werner’s Geni profile and translated by DeepL, from a book written by Anna Maria Zimmer, Juden in Eschwege:Entwicklung und Zerstörung der jüdischen Gemeinde, von den Anfängen bis zur Gegenwart (1993), p. 272, provides some touching details about Moritz Werner and his life during and after the Nazi era:

Moritz Werner was – like his father Max Werner – a partner and manager of the important textile factory Brinkmann since 1916. Because of the National Socialist persecution, Moritz Werner was forced to sell the company and flee to England.

“In mid 1938 the purchase was perfected. A Catholic named Rhode from Kassel, who produced goods for the armaments industry, had bought L.S. Brinkmann. After the war, when Rhode was terminally ill, he developed feelings of remorse and tracked down my father Moritz in England. Mr. Rhode asked for a visit and my father and he made a contract, i.e. my father bought the company back – that was at a time when there was no official reparation! In 1949 the takeover was perfected. …

When my father celebrated his 25th anniversary with the company in 1931, the staff donated a bronze plate with a dedication and two knitting hands for him. During the forced sale [1939] the plate suddenly disappeared.

In 1949, when my father was sitting in his office again for the first time, there was a knock at the door and a small delegation of employees came in… They struggled to carry a box containing this bronze plate. Before taking over the company, these employees had fastened the plate in the chimney with strong wires and thus hidden it.”

My Heritage reports that Moritz died in Lugano, Switzerland, on April 27, 1966, and that Jenny died in Chile (no date provided). When had Moritz and Jenny moved from England? Why did he die in Switzerland, she in Chile? So many unanswered questions.

I cannot find their son Max on either the 1939 Register or on an enemy alien registration. Max would have been a teenager at the time. Where could he have been? All I could find for Max was an entry in the England & Wales, Marriage Index on Ancestry for his marriage in 1947 to Clara Amalia Reiss,2 and I know nothing more about Clara or Max except what I found on My Heritage and on David Baron and Roger Cibella’s family report: that Clara was born in Vienna on September 27, 1920, that she and Max had two children, that Clara died on April 6, 2011, and that Max died eight months later on December 9, 2011. According to their profiles on My Heritage, both Max and Clara are buried in Jerusalem.

UPDATE: My cousin Joanne Warner-Loewenthal shared a link with me about Max Werner, her cousin. It reports that he graduated from the University of Leeds in England and became a naturalized English citizen. After the war, however, he returned to Germany to become a director of the LS Brinkmann knitwear company in Eschwege. He also developed an interest in race cars and in photographing racing, as described here.