Now I would like to turn to Seligmann’s youngest sibling, Simon Goldschmidt, whose story I’ve already told in bits and pieces at other times because his second wife, Fradchen Schoenthal, was the sister of my Schoenthal great-great-grandfather Levi Schoenthal, and because one of his grandchildren, Ella Bohm, married my great-great-uncle Jacob Katzenstein.

But let me tie together those bits and pieces into one story so that I can continue Simon’s story with some background. Simon was born in Oberlistingen in about 1795 to Jacob Falcke Goldschmidt and Eva Reuben Seligmann (no connection to my Seligmanns). In 1822, he married Eveline Katzenstein of Grebenstein (no known familial connection to my Katzensteins). Their first child, Jacob, was born in about 1825 in Oberlistingen. 1

In May, 1826, Simon was charged with burglary and attempted robbery.2  As I wrote about at length in this post, in 1830 there was a trial, and Simon was convicted and sentenced to ten years in prison with his legs shackled. Simon appealed, and on December 24, 1830, the appellate court upheld the verdict, but reduced the sentence from ten years to four years because the victim’s injuries were not dangerous or life-threatening and because Simon had not used any lethal weapons. The court also observed that the delay in trial was not Simon’s fault and took that into consideration in reducing his sentence.

Simon and Eveline had four more children after Jacob: Lena (1828),3 born while he was awaiting trial, and three born after he was released, Hewa “Eva” (1836), Joseph (1837), and Jesajas (1839), all born in Oberlistingen. Sadly, Simon and Eveline’s last two babies did not survive. Both Joseph and Jesajas died in infancy. 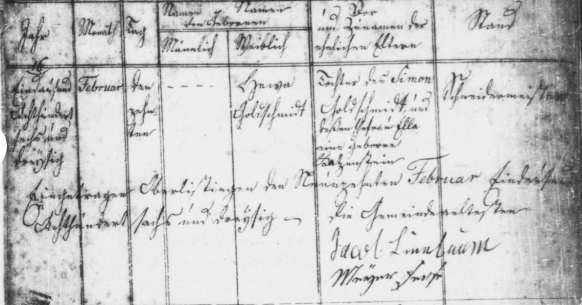 A year after the death of Jesajas, Simon’s wife Eveline died on August 19, 1840. Simon was left on his own to raise his fifteen-year-old son Jacob, twelve-year-old daughter Lena, and four-year-old Eva.

Simon’s son Jacob left Germany that same year and immigrated to the US.4  By 1850, Jacob was living in Washington, Pennsylvania, working as a tailor and living with two other men who were tailors, and had changed his surname to Goldsmith.

On September 10, 1844, Simon married Fradchen Schoenthal, my three-times great-aunt, in Oberlistingen. Fradchen was already 37 at that time, and Simon was 49.

Almost exactly a year later, Simon and Fradchen arrived in the United States along with Simon’s youngest daughter, Eva, who was then nine years old.

They must have settled first in Baltimore because Simon and Fradchen had two children who were born there, Henry on January 10, 1847,5 and Hannah on June 5, 1848.6 Since Henry and Hannah’s mother and father were both my blood relatives, they are my double cousins: first cousins, three times removed through Fradchen, and first cousins, four times removed through Simon.

By 1850, Simon and Fradchen (also known as Fanny) were living in Pittsburgh with Henry and Hannah as well Simon’s two daughters from his first marriage, Lena and Eva. Simon was working as a tailor and had, like his son Jacob, Americanized his surname to Goldsmith.

Simon lost his second wife Fradchen soon thereafter; she died on August 11, 1850, at age 43. Once again Simon was left with young children—Henry was three, Hannah was two.

Simon’s daughter Lena married another German immigrant, Gustavus Basch in 1856.13 In 1860, they were living in Connellsville, Pennsylvania, with their first two children, Frank (1858) and Jacob (1859). Connellsville is under fifty miles from Washington, Pennsylvania, where Lena’s father Simon and her brother Jacob were then living.

As for Simon’s youngest child with Eveline, his daughter Eva, her whereabouts in 1860 are unknown. I cannot find her anywhere on the 1860 census. More on Eva here and here and in a subsequent post.

Thus, by 1860, all the members of the family of Simon Goldschmidt (except possibly Eva) were living in western Pennsylvania, most of them in Washington, Pennsylvania.  That was as far as I’d gotten with Simon’s story in my earlier posts. Now I can pick up with Simon and his children in the years after 1860.

22 thoughts on “Simon Goldschmidt: From German Criminal to American Grandfather”