Helmina Goldschmidt’s oldest child, her daughter Helene Rapp Lehmann, was harder to trace than her two younger siblings, Arthur and Alice. I knew that Helene, her husband Sally, their daughter Else Berta, and their son Ludwig all eventually ended up in the United States because all four are listed in the Social Security Death Index. But it was hard to find information about their departure from Germany and about their eventual arrival and life in the US and the years in between. 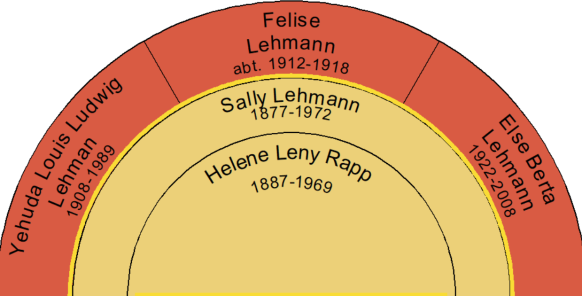 This document from the Arolsen Archives on Ancestry provided the first clues. It shows that Sally Lehmann was a dentist and that Else Berta, daughter of Helene and Sally Lehmann, had immigrated to Palestine. 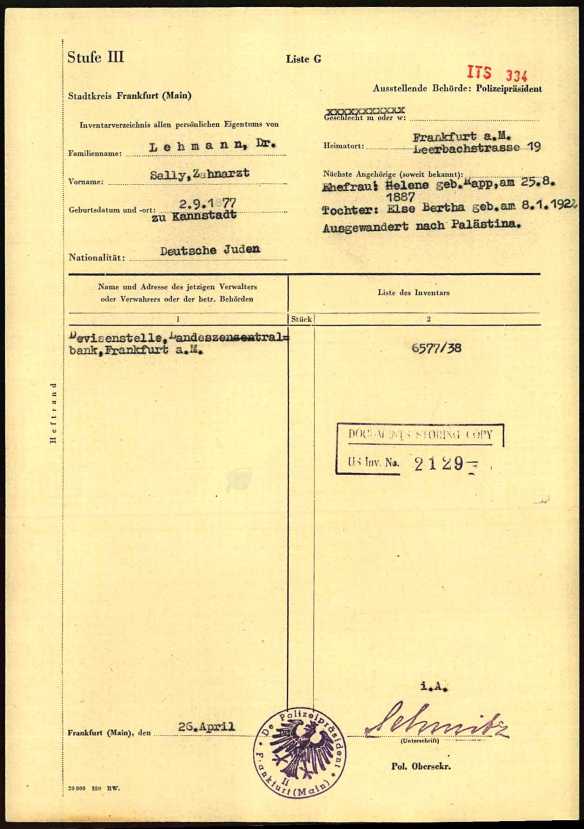 I then found Else’s immigration papers showing that she first entered Palestine on February 21, 1939, when she would have been only seventeen. She became a naturalized citizen of Palestine on June 25, 1941. She was unmarried at that time and a hair dresser. (These papers are located at the Israel Archives website located here.) 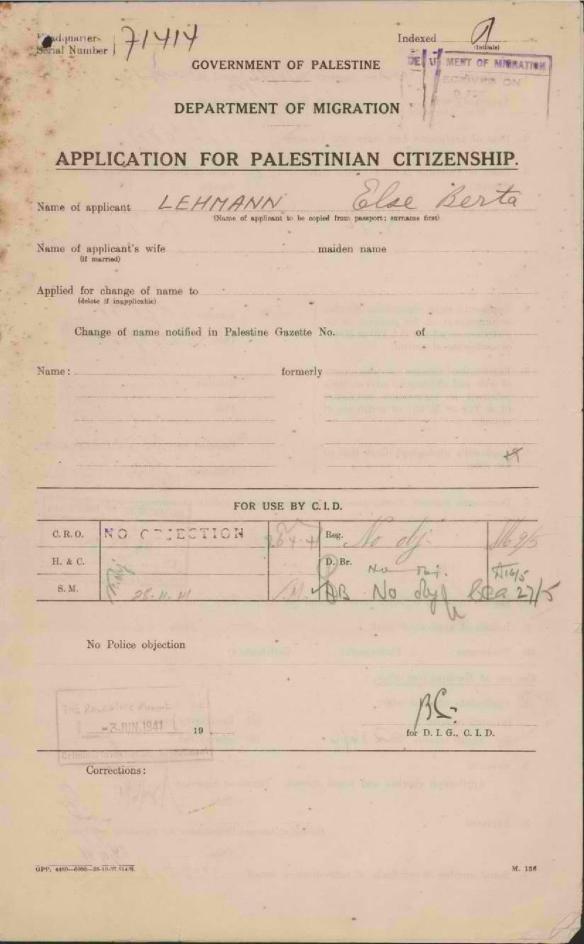 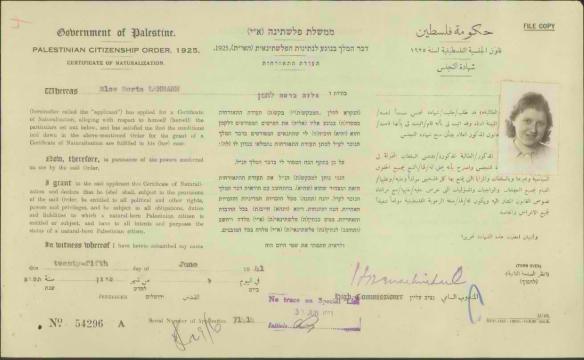 I assumed that since Else was so young, the rest of her family might have immigrated to Palestine also around the same time, but I could at first not find any Palestinian immigration papers for her parents Helene and Sally or for her brother Ludwig.

At the same time I was researching them all, I received an email from someone in Israel who had questions about one of my other relatives, and so I asked him for advice about finding more information about those who had left Europe for Israel in the 1930s and 1940s. He recommended that I become a member of IGRA—the Israel Genealogy Research Association. I had seen their website many times before, but had hesitated to spend the money to become a member. This time I bit the bullet and joined.

And I am so glad that I did because a quick search uncovered two records for Sally Lehmann. Sally was listed in a 1940 and a 1946 Tel Aviv directory of doctors, dentists, pharmacists and other medical professionals. Thus, I know now that he had immigrated to Israel by 1940.

In addition, I found a 1948 divorce record for Else Berta Lehman, daughter of Shlomo (Sally), from Leopold Ickelheimer, suggesting that Else was likely still in Israel in 1948.

Finally, the IGRA website had a file indicating that a Ludwig Lehmann had changed his name to Yehuda in April 1936. I couldn’t be certain that this was the same Ludwig Lehmann, but if it was, that would mean that the Lehmann family, or at least Ludwig, was in Palestine as early as 1936.

And then, you know how sometimes you search and search and find nothing, and then you return to the same source days later and suddenly a record appears? That’s what happened here. I returned to the Israel Archives website where the Palestinian immigration records are available, and this time found Sally and Helene (Rapp) Lehmann’s immigration and naturalization. The file revealed that Sally and Helene had first arrived in Palestine on July 4, 1938, and that they became naturalized citizens on June 17, 1941. 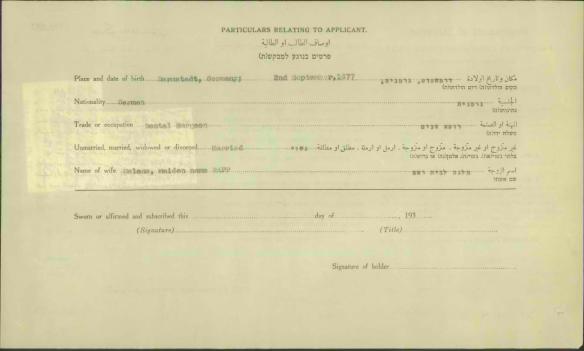 However, no one in the Lehmann family remained permanently in Israel. I found a 1955 manifest for a ship sailing from Haifa, Israel, to New York, that lists Sally and Helene Lehmann as passengers and as Israeli citizens.1

I also found one for an Else B. Spitzer, arriving April 24, 1953, that I thought might be Else Berta Lehmann, but wasn’t sure. There was no age or other identifying information, and she was listed as a German citizen, not an Israeli citizen. 2 But then I located this naturalization index card that shows an Else Berta Spitzer with the same birth date as Elsa Berta Lehmann, residing at 550 West 172nd Street in New York City. 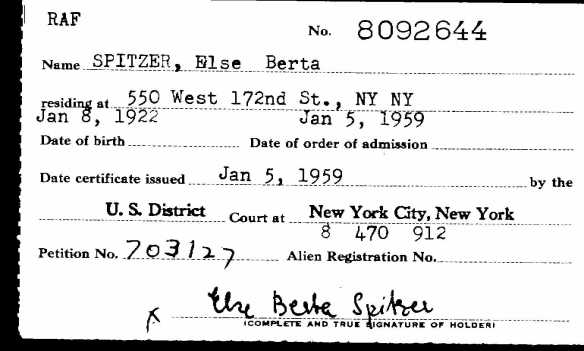 I used that address to search for Spitzers in the 1959 New York City directory living at 550 West 172nd Street and found a Kurt Spitzer living at that address, so now I knew that Else’s second husband was Kurt Spitzer.3 I also found his naturalization index card: 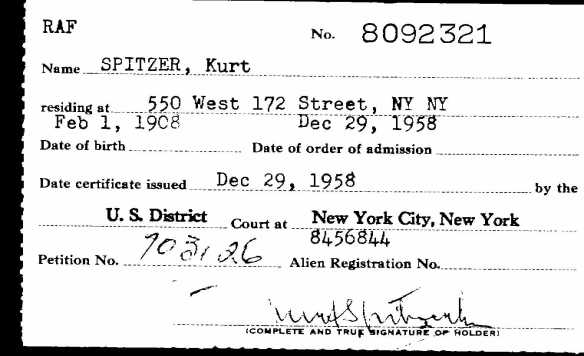 Unfortunately I cannot find any records showing Else with Kurt except for these two cards that show that they were living at the same address at the time of their naturalization. I did, however, find a record for Kurt’s enlistment in the US military on October 28, 1942, in New York, showing that he was a barber, beautifician, or manicurist, meaning he and Else were both in the hair dressing field. Kurt was already at that time a US citizen;4 he was born in Wurzburg, Germany, and immigrated to the US in 1925.5

Else’s brother, Sally and Helene’s son Yehuda Ludwig Lehmann, was particularly hard to locate with much certainty, After searching under all possible combinations of his names, I found a manifest with a Yehuda L. Lehmann coming to the US on December 29, 1952, from Cannes, France. He identified himself as divorced and as an Israeli citizen. He was 44 years old, and that would be consistent with the 1908 birth date I have for Ludwig Lehmann.

Thus, all the members of Sally and Helene’s family had left Israel for the US in the 1950s. I don’t have much information about their lives after their arrival, although records show that Yehuda married in 1954, was divorced in 1956, and remarried in 1965.  I don’t know whether either Yehuda or Else had children in any of their marriages.

Thus, Helene Rapp Lehmann was among the fortunate ones who escaped Nazi Germany along with her husband and her children, first to Palestine/Israel, and then to the US. In fact, her siblings Arthur and Alice and their families as well as their mother Helmina Goldschmidt Rapp were also among those who safely escaped. That is quite remarkable.

Having completed the story of the family of Helmina Goldschmidt Rapp, I have now written about all the children of Jacob Meier Goldschmidt and Jettchen Cahn. Next I will turn to Jacob’s younger sister Malchen Goldschmidt, the fourth of the seven children of Meyer Goldschmidt and Lea Katzenstein and their youngest daughter. But first some updates to prior stories.

20 thoughts on “Searching for Helene Rapp Lehmann and Her Family: A Genealogy Adventure”