It was simply delightful to listen to these siblings tell family stories of growing up in New York, including those about visiting their grandmother Grete in her Manhattan apartment where they had to be on their best behavior, and about their father Erwin Vogel, who although stern in some ways also had a terrific sense of humor. They also shared that their parents Gabrielle and Erwin met on a blind date on December 7, 1941, Pearl Harbor Day, that was set up by other German refugees in the jewelry business. The Vogel siblings had such warm and loving memories that it was uplifting to share an hour just talking to them all.

They also were able to answer one question I had about their great-grandmother Hedwig. When I wrote about Hedwig back on May 29, 2020, I noted that she had traveled back and forth to the United States twice during the 1930s, presumably to visit her daughter Grete who was living in New York with her husband Berthold Heimerdinger and their daughter Gabrielle. But both times Hedwig had returned to Europe—in 1935 to Germany and to Switzerland in 1937.  When I first wrote about Hedwig, I could not imagine how or where Hedwig had survived the war.

According to Hedwig’s great-grandchildren, Hedwig was hidden in the Netherlands during the Nazi occupation. One of Hedwig’s great-granddaughters, Susan, met members of the family who had kept Hedwig safe in their home by hiding her in their attic.  They shared with Susan the following story about Hedwig’s experience.

One member of the household had dementia, and they didn’t tell him that Hedwig was upstairs because they were concerned he would inadvertently reveal that she was living there if questioned by others, including the Gestapo. One night after the family had gone to bed, Hedwig came down from the attic and scared the daylights out of this poor man with dementia. He was convinced he’d seen a ghost, and the only way the family could calm him down was to tell him the truth—that they were hiding a Jewish woman in their attic.

Fortunately, he never revealed the secret, and Hedwig was kept safely hidden until after the war ended. Then she was able to come to the US and rejoin her daughter Grete and family until she died at the age of 87 on December 9, 1964. 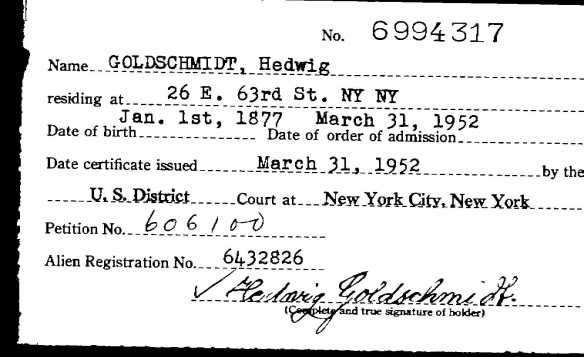 Susan shared with me a blog post she wrote after she and her sister Nancy took a trip to Germany and visited Wiesbaden, where their grandmother Grete moved after marrying Berthold Heimerdinger and where their mother Gabrielle grew up. I will share just a portion of that blog post in which Susan made some observations about her grandmother Grete:

We saw the house of our mother Gabrielle and her neighborhood and could picture our grandmother and grandfather and their fine lifestyle in Wiesbaden. We had drinks at a lovely restaurant outside the grand spa of Wiesbaden and could imagine Granny walking the beautiful lawn in fine clothes, ready for a ball or other event. These were the stories we heard over and over from her – her dreams and thoughts were always on this former life.

Now, years later, I have much more understanding of why she was so bitter all her life – she lost the thing that was very precious to her – her status. When she came to the USA with little of her possessions and money she began a new life, but not one of her choice. She treasured the few items that she brought (some furniture, silver, jewelry) but never got over this loss of her identity.

So many of those who survived and escaped from the Nazis, including many of my own relatives, must have felt the same way—a deep and lasting loss of identity. They didn’t only lose their possessions and their homes and many of their family members and friends. They lost their sense of who they were—proud, educated, and successful German Jews. It’s mind-boggling to consider their pain.

Whatever bitterness their grandmother felt certainly was not passed down to her grandchildren. They all seem to be filled with love and gratitude for all that they have. Thank you once again to my Vogel cousins for sharing their stories.

Betty Schnadig and Bernard Arie Cohen and two of their four children were murdered in the Nazi concentration camps. Their oldest child Arnold survived, but his story is also terribly tragic. Thank you once again to my cousin Betty, Arnold’s daughter, for sharing their story and the family photographs posted here.

Arnold was a traveling salesman, and he married Saartje Odenwald in Groningen, Holland, on October 18, 1936.1

Their son, Bernard Arie, known as Bennie, was born a year later on November 15, 1937, in Den Bosch, where Arnold and Saartje had settled after marrying. Den Bosch is about 150 miles southwest of Groningen. Bennie was named in honor of his paternal grandfather, who was, however, still living at that time. Here are some photographs of Arnold, Saartje, and Bennie: 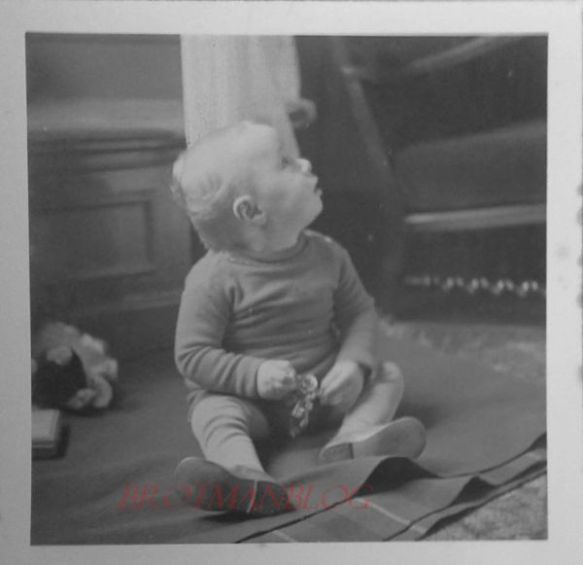 When I started to search for what happened to Arnold and his family during the Holocaust, I was perplexed. Arnold and his wife Saartje both survived, but their son Bennie did not. He was only six years old. How could it be that he was murdered at Auschwitz and both his parents survived?

Researching that question led me to a truly devastating story that is recorded on the Stolpersteine website devoted to this family. Arnold and Saartje knew a couple who were active in the Resistance movement, Piet Toxopeus and Ellen Dwars, who arranged for a man named Geevers to take little Bennie into hiding. Geevers took three thousand guilders from the Cohens, but never in fact took Bennie into his home. Somehow instead Bennie ended up in a town called Dordrecht with a woman named Els van As, who took many Jews into her house to hide them from the Nazis. Dordrecht is 40 miles west of Den Bosch, and Bennie’s parents had no idea that that was where he had been taken.

Meanwhile, Piet and Ellen hid Arnold and Saartje in Bennekom. That placed them about 57 miles northeast of Dordrecht where their son was being hidden. In August 1942, Arnold and Saartje were then placed with an older couple, the Laars, in Ede, a town near Bennekom, where they stayed safely until after the war.

But their son Bennie was not as fortunate, as told in the Stolpersteine website:

It happened on Monday evening, October 25, 1943: the insensitive police officer Herman Gerard Feodor Wolsink from Dordrecht pulled 5-year-old Bennie Cohen into the horror of the war.

Here and there in Dordrecht, Jewish hunters had been working all day long at addresses where people might be in hiding…..In the house of the Van As family on the Vlietweg, they find a radio set and a money box with twenty thousand guilders in it. …. The Jew hunters suspect that a Jewish child is also hiding at this address. The Hague detective Cornelis Johannes Kaptein therefore orders Wolsink to take a closer look at the children who are sleeping in the attic. And then this happens, according to a maternity nurse who lived in rooms with the Van As family, and who told it after the war.

Bennie was impressed to always say his name was De Koning, and not Cohen. When Wolsink asked the boy for his name, he said: “Bennie de Koning.”

“Wolsink then asked,” said the nurse, “what his mother’s name was and then the poor child said: ‘Saartje’. To which Wolsink said: “Haha, a Jew after all!” Then he pulled down the little boy’s pajama bottoms and said, “It’s a Jew.” This child had to come along then.

About 3.5 months later this child was dead: deported to Auschwitz via camp Westerbork and exterminated there on 11 February 1944. His life had already ended at the age of six.

I ask you to look at these photographs of this beautiful little boy. How could anyone do this to anyone, let alone a six year old child? 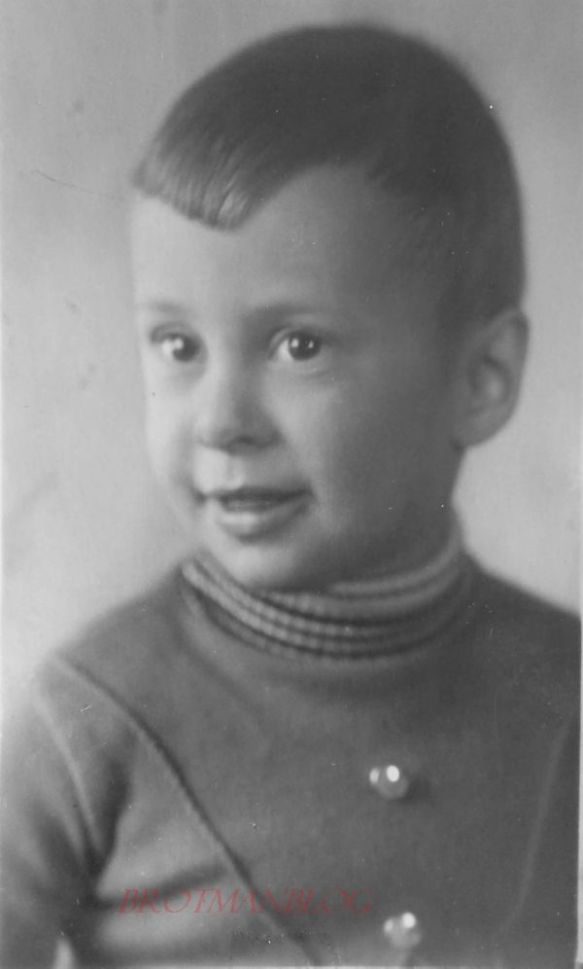 On November 9, 1945, Arnold Cohen posted this heartbreaking notice in the Nieuw Israelietisch Weekblad, asking for information about his missing family members, including his son, his parents, his siblings, his nephews, and his in-laws, all of whom had been murdered by the Nazis:

Arnold and Saartje somehow found the strength to go on. They had two daughters born after the war, and Arnold became a wholesaler of paper products in Groningen. Arnold died on December 15, 1967,2 and his wife Saartje on April 19, 1978.3 It’s hard to imagine how anyone finds hope after what they experienced, but having more children is certainly evidence that Arnold and Saartje believed that goodness and love can still exist and can prevail in this world. 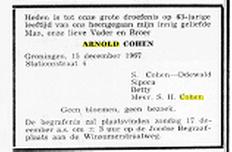 Thank you again to Bert de Jong and Rob Ruijs for all their help and especially to my cousin Betty for sharing these precious photographs and her family’s heartbreaking story. Betty lost her grandparents, her aunts and uncles and cousins, and her brother Bennie in the Holocaust.